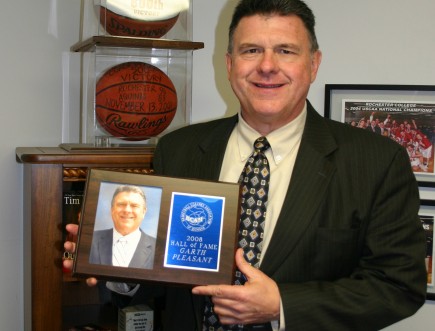 Staff
ROCHESTER HILLS, Mich. — The Basketball Coaches Association of Michigan recently inducted Rochester College head basketball coach and athletic director Garth Pleasant into its Hall of Fame. Pleasant graduated from the former Michigan Christian College in 1969 and has coached its basketball team since 1979.His 586 career wins at Rochester are the most among active Michigan coaches.
CAMPUS MINISTRIES FLORIDA CAMPUS MINISTRIES COCOA BEACH, Fla. — CIA Tampa, CIA Miami, Gators for Christ and Ambassadors For Christ all gathered for a recent retreat where minister Buddy Bell spoke on the perceptions of the world and how to help change those perceptions.
About 130 students attended, said Lynn Stringfellow, director of CIA Ministries and campus minister for the Bay Area church near Tampa. CIA stands for Christians in Action.
HIGHER EDUCATION ABILENE CHRISTIAN UNIVERSITY ABILENE, Texas — ACU’s Department of Journalism and Mass Communication recently dedicated its converged-media newsroom that houses operations for print, online and broadcast news media.
In addition, Hamil Harris, staff writer at The Washington Post, spoke about his experiences and how media is changing. Harris, a deacon at the University Park church in Hyattsville, Md., addressed “Diversity and the New Media: Are You Ready?” as part of the journalism department’s Distinguished Speaker Series.
FAULKNER UNIVERSITY
MONTGOMERY, Ala. — Capt. James Lovell, the commander of the 1970 Apollo 13 mission whose terrifying problems kept the world riveted to the TV until the crew safely splashed down, served as the keynote speaker at Faulkner’s recent benefit dinner.
While at Faulkner, Lovell told the Montgomery Advertiser that the mission gave him a new perspective on life.
“I don’t worry about things anymore,” he said. “I take things one thing at a time. I don’t regret the past. I don’t sweat the future.”
FLORIDA COLLEGE TEMPLE TERRACE, Fla. — Author John Maxwell spoke to a sold-out crowd of Florida College supporters and local business leaders at a recent banquet. The event was tied to the announcement of the college’s new bachelor’s degree in business.
HARDING UNIVERSITY SEARCY, Ark. — Harding’s enrollment has topped 6,500 — a 22nd consecutive annual record and a nearly 3 percent increase over last year’s 6,332.
Undergraduate enrollment is 4,188, including 1,182 new students. Harding received 2,186 applications for the approximately 1,200 openings for new students.
“We are extremely pleased,” said President David B. Burks.
LUBBOCK CHRISTIAN UNIVERSITY
LUBBOCK, Texas — Launched this fall, a new master’s degree program in organizational leadership is designed to enhance the ability of any bachelor’s degree holder to become a more effective leader, university officials said.
“Students will not only gain skills to help them professionally, but also personally — in all facets of their life — whether it be with family, volunteering in the community or within their churches,” program coordinator Kathy Crockett said.
The program includes 36 hours of interdisciplinary courses for working adults.
LIPSCOMB UNIVERSITY
NASHVILLE, Tenn. — Low-emissions building materials, energy-efficient windows and a smart temperature control system are just a few of the “green” characteristics of Lipscomb’s newly renovated Burton Health Sciences Center.
Such attributes make it one of the healthiest pharmacy facilities in the nation, university officials said.
OHIO VALLEY UNIVERSITY
VIENNA, W.Va. — Gayle Manchin, wife of Gov. Joe Manchin, recently honored OVU with a 2008 West Virginia Governor’s Red Wagon Award for its outstanding vision, dedication and commitment to children and youth.
The first lady and West Virginia’s Promise director Pam Dugan presented a miniature red wagon to OVU representatives during a banquet ceremony in Charleston.
“The goals of West Virginia’s Promise are natural extensions of Ohio Valley University’s mission to transform lives in a Christ-centered academic community that integrates higher learning, biblical faith and service to God and humanity,” OVU President James A. Johnson said.
OKLAHOMA CHRISTIAN UNIVERSITY
OKLAHOMA CITY — Oklahoma Christian students, alumni, faculty and staff gave Oklahoma City a “thank you” for 50 years of classes in the city.
A crew of about 175 people from the university recently picked up trash downtown as part of the Day in the City service project, The Oklahoman reported.
K-12 CHRISTIAN SCHOOLS WESTBURY CHRISTIAN SCHOOL HOUSTON — Hurricane Ike gave students a chance to serve.
With power out at the school, administrators offered students a chance to go to the Houston Food Bank downtown and volunteer for a day.
“We were hoping for 30 to 50 students and instead took 147 of our students and faculty and had one of the best learning experiences one could have,” executive administrator Greg J. Glenn said.