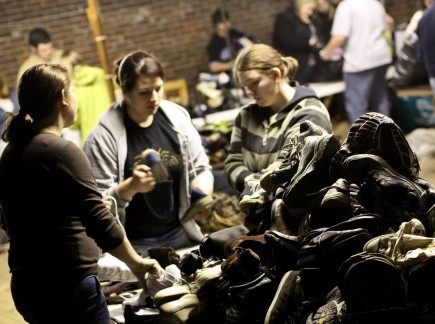 FROM STAFF REPORTS
Baseball star helps Boles Home
QUINLAN, Texas — The Vernon Wells Perfect 10 Foundation, a project of the Toronto Blue Jays baseball star and his wife, Charlene, will build two homes for single mothers and their families at the Arms of Hope/Boles Children’s Home campus.
A groundbreaking ceremony was held April 6 during the Blue Jays’ series against the Texas Rangers. Wells is a native of Arlington, Texas.
HIGHER EDUCATION   ABILENE CHRISTIAN UNIVERSITY ABILENE, Texas — The bridge between teachers and students can be a tricky one to cross, but the ACU College of Business Administration is allowing students to get to know their professors on a more personal basis.
Through the “Business Lunch” program, students can sign up to share a midday meal with any professor in the department. Students and professors can enjoy a free lunch on campus through a partnership with Aramark.
“The goal of the program is simple: relationship building and networking,” said Amanda Pittman, a marketing associate in the College of Business Administration.

FAULKNER UNIVERSITY MONTGOMERY, Ala. — Reed Sutton, a state champion coach at Houston’s Westbury Christian High, said he’s excited about starting a women’s basketball program at Faulkner.
He began work in March as the Faulkner women’s basketball coach. The program will begin play in the fall, the Montgomery Advertiser reported.

HARDING UNIVERSITY SEARCY, Ark. — When the career services office at Harding wanted to come up with a unique new way for churches across the country to interview potential interns, they developed C-Harmony, which closely resembles speed dating and allows churches to interview multiple students in one afternoon.
The recent event took place on campus and drew representatives from 36 churches across eight states, with more than 225 interviews conducted.
“There are a wide variety of churches that come,” said Deb Bashaw, director of the career services office. “Some of the churches have youth ministries, and they’re just adding interns for the summer. And some of them are wanting somebody to come in and do a youth program for the summer.”
C-Harmony stands for Church Harmony and focuses on the importance of the relationship between congregations and ministers.

LIPSCOMB UNIVERSITY NASHVILLE, Tenn. — An Operation Yellow Ribbon event brought 4,000 people to Allen Arena on March 23 for an evening of songs and stories featuring retired Gen. Tommy Franks and country singer Charlie Daniels.
About 170 people, including injured military veterans, attended a symposium that day to address many of the issues veterans face upon returning home.
Thousands gathered in Allen Arena to hear Kix Brooks, Amy Grant, Gretchen Wilson and Larry Gatlin and the Gatlin Brothers — along with Franks and Daniels — in a fundraiser for Lipscomb’s Yellow Ribbon scholarship program and other nonprofits serving the needs of returning veterans and their families.

OHIO VALLEY UNIVERSITY VIENNA, W.Va. — The OVU alumni association, with assistance from the university’s music department, is planning an alumni chorus reunion and retreat for June 4-6.
Alumni singers from Ohio Valley and the now-defunct Northeastern Christian Junior College in Villanova, Pa., will gather on campus for three rehearsal sessions and a live-audience concert June 5. The chorus also will perform June 6 at the Grand Central Church of Christ in Vienna.
“We’ve been talking about a summertime alumni chorus reunion off and on for years,” said Dennis Cox, alumni association executive director. “I could not be more pleased that we could do this as part of our Golden Anniversary Celebration.” For more information, call (304) 865-6081.

OKLAHOMA CHRISTIAN UNIVERSITY OKLAHOMA CITY — A closed church contributed $100,000 to establish the North Irving Church of Christ Endowment Fund for Oklahoma Christian University’s Beam Library.
The North Irving Church of Christ was founded in September 1958 and disbanded in September 2009. The liquidation of its assets provided an opportunity for the former members to support a number of faith-based programs.
“We are so grateful to the members … for their generosity and foresight in providing this important gift for our library,” said Tamie Willis, library director.
K-12 CHRISTIAN SCHOOLS   FORT WORTH CHRISTIAN SCHOOL FORT WORTH, Texas — Former President George W. Bush spoke recently at a benefit gala for Fort Worth Christian.
“Every day, I tried to bring honor and dignity to the office,” Bush told a crowd of more than 1,100 at the Omni Fort Worth Hotel.
The school’s gala sold out in 10 days as families from the school scooped up the $150 tickets that would enable them to see the former president, The Dallas Morning News reported.
The school enrolls 865 children in kindergarten through 12th grade.

MINISTRY TRAINING   MAPEPE BIBLE COLLEGE LUSAKA, ZAMBIA — This ministry training school in southern Africa recently launched Growth Groups, partnering six or seven students with a faculty or staff member for the purpose of mentoring, said director Kennedy Mukuka.
“We have realized that, for us to fully be helpful to our students, we need to spend more time with them — not only in class, but also out of the classroom setting,” Mukuka said. “If we want to bring about spiritual formation in the lives our students, we need to mentor them like Jesus did with his disciples.”