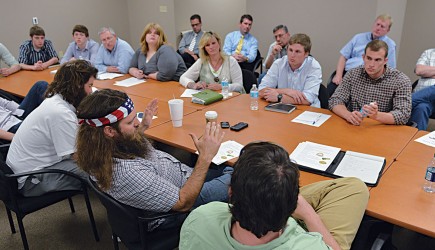 WORLD BIBLE SCHOOL
CEDAR PARK, Texas — “Aprenda acerca de la Biblia gratis.” That’s Spanish for “Study the Bible for Free.”
World Bible School, a Bible correspondence ministry supported by Churches of Christ, has launched a Spanish-language version of its website, www.escuelabiblicamundial.org, for spiritual seekers in the U.S. and around the globe. The ministry seeks Spanish-speaking teachers to correspond with the students. For more information, see  the “Become a Teacher” link at www.worldbibleschool.net.
HIGHER EDUCATION

ABILENE CHRISTIAN UNIVERSITY
ABILENE, Texas — ACU’s 8,048-page, 1,094-pound Waynai Bible, said to be the largest book of its kind in the world, is on loan for display in Colorado Springs, Colo., as part of the Green Collection’s traveling exhibit at Passages, an interactive Bible showcase.
“The Green Collection and its exhibitions of biblical artifacts exist so that people can experience the creation of a book that has altered history, shaped cultures, inspired minds and changed lives,” said John B. Weaver, dean of the ACU library. For more information, see www.explorepassages.com.
FREED-HARDEMAN UNIVERSITY
HENDERSON, Tenn. — Does Jesus exist?
Ralph Gilmore, professor of Bible and philosophy at Freed-Hardeman, believes deeply that he does. With assistance from fellow professor Doug Burleson, Gilmore argued for the historicity of Jesus in a dialogue sponsored by the Warren Apologetics Center in Vienna, W.Va.
The discussion also involved Roy A. Varghese, who gave a historical view of Jesus consistent with Catholicism, and Robert M. Price, author of “Deconstructing Christ,” who promoted the view that Jesus never existed.
“We were extremely well-prepared, with an arsenal of research,” Gilmore said. View a webcast of the debate at warrenapologeticscenter.org.

PEPPERDINE UNIVERSITY
MALIBU, Calif. — Christians sang, studied and prayed for rain during the recent Pepperdine Bible Lectures.
As the 70th annual lectures concluded, a 28,000-acre wildfire raged a few miles west of the university’s campus in Ventura County. The prayers were answered, as roaring Santa Ana winds calmed and light rain fell in the days after the lectures, allowing firefighters to contain the blaze.
The Bible lectures, the first under the direction of Mike Cope, brought together thousands of church members from around the globe. “Can I Get a Witness: Faithfully Following the Lamb in Revelation” was the theme.
MEDIA MINISTRY
WORLD CHRISTIAN BROADCASTING
ANCHOR POINT, Alaska — Faith-based broadcasts have traveled from this remote northern city to short-wave radios around the world for 30 years, thanks to World Christian Broadcasting.
Workers with the church-supported, Franklin, Tenn.-based ministry celebrate the milestone as they wait for approval of transmitters for a short-wave antenna on the island of Madagascar.
The ministry daily broadcasts 10 hours of programming in Mandarin Chinese, five hours in Russian and five hours in English. The ministry plans to broadcast in additional languages from Madagascar, including Arabic, Spanish and Portuguese.
SCOUTING
CHURCHES OF CHRIST FOR SCOUTING
ABILENE, Texas — The board of trustees of Members of Churches of Christ for Scouting vehemently opposed the recent decision by the Boy Scouts of America to allow openly gay boys into its ranks.
However, the national association urges church-sponsored Scout units to “stay the course” rather than leave the organization.
“We are perplexed by the decision that was rendered, but we are confident that God is in control and that we can continue to be a positive witness for Christ throughout the world of Scouting,” the Church of Christ association said in a letter to member units.
See the full statement at www.christianchronicle.org/blog. Search for “scouting.”