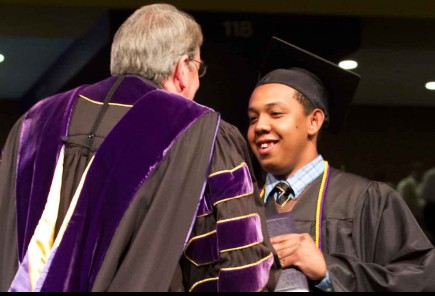 Staff Reports
The graduate is one of 26 students from Madagascar who spent the last four years at Lipscomb and earned a college degree paid for by the Malagasy government.
BIBLE CAMPS
GANDER BROOK CHRISTIAN CAMP
RAYMOND, Maine —  Gander Brook plans a memorial service at 4 p.m. June 24 — the Sunday of its annual Work and Worship Week — to celebrate the life of Cecil Perkins.
A beloved figure to generations of campers, Perkins died Jan. 9 at age 58. He was a member of the White Station Church of Christ in Memphis, Tenn.
For more information, e-mail [email protected] or call (603) 623-5559.
CAMPUS MINISTRY
EKKLESIA CAMPUS MINISTRY
KIRKSVILLE, Mo. —  The Kirksville Church of Christ’s Ekklesia campus ministry recently marked the 100th anniversary of the Titanic’s sinking with a party at Truman State University.
At the Saturday event, partygoers received first-, second- or third-class tickets and competed for seats on a lifeboat, church elder Barry Poyner said.
That Sunday at church, students studied the biblical account of Paul’s shipwreck, Poyner said.
CHILDREN AND FAMILIES
ARMS OF HOPE
MEDINA, Texas —  Kevin McDonald, president and CEO of Arms of Hope,  resigned effective June 1.
McDonald and his wife, Nathalie, recently moved to Houston to care for their infant daughter Marlie Ruth, who is undergoing treatment for brain cancer.
Under McDonald’s leadership, Arms of Hope was formed in 2009 with the consolidation of Medina Children’s Home and Boles Children’s Home, 40 miles northeast of Dallas. Since the consolidation, the ministry has added two urban programs in the Dallas area.
“This has been a very difficult decision because I dearly love serving socially disadvantaged children through Arms of Hope,” McDonald said.
HIGHER EDUCATION
ABILENE CHRISTIAN UNIVERSITY
ABILENE, Texas — Four ACU professors attended a special White House briefing on “Advancing the Common Good at Home and Abroad.”
The recent event, hosted by the Office of Faith-Based and Neighborhood Partnerships, focused on topics important to the faith community.
“It is important that as religious educators we hear from government policymakers and that they hear from us,” said Mark Hamilton from ACU’s Graduate School of Theology.
Other attendees included Jerry Taylor and Chris Hudson from the Department of Bible, Missions and Ministry and Carisse Berryhill from the Brown Library.
HARDING UNIVERSITY
SEARCY, Ark. — Harding will begin offering scholarships to incoming freshmen who have attained the highest levels in scouting programs in the U.S.
Jim Carr, executive vice president, announced the $1,000-a-year scholarships at the recent annual board meeting for Members of Churches of Christ for Scouting.
OKLAHOMA CHRISTIAN UNIVERSITY
OKLAHOMA CITY — Oklahoma Christian is opening a Texas office in the Dallas area.
The office on the sixth floor of Las Colinas Tower One in Irving, Texas, will serve as a local hub for student recruiting, church relations, fundraising and outreach to Oklahoma Christian’s Texas alumni.
Alumnus Alan Phillips will lead the office as the university’s new vice president for Texas operations.
K-12 CHRISTIAN SCHOOLS
CHRISTIAN HERITAGE SCHOOL
SAN ANTONIO — By any standard, Christian Heritage’s Class of 2012 had an unconventional senior year.
When the 180-student school lost its lease a year ago, many were crushed to see it close. But an agreement with an area private school allowed eight seniors to finish their studies in what they affectionately dubbed their “one-room school,” the San Antonio Express-News reported.
Christian Heritage recently held its final graduation ceremony at the MacArthur Park Church of Christ, where the school opened the doors of its first site 34 years ago.