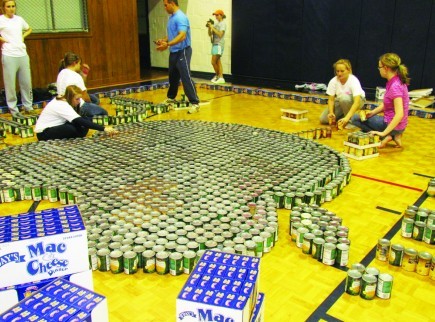 From Staff Reports
BIBLE CAMPS GANDER BROOK CHRISTIAN CAMP RAYMOND, Maine —  “Camperships” are helping more children enjoy Bible camp.
The donor-funded camp scholarships allow low-income children to experience Gander Brook, leaders said.
This past summer, 23 baptisms occurred during camp sessions, director Shawn Daggett said. “I continue to believe that more eternal good is done in the lives of our young people at Gander Brook than anywhere else,” Daggett said.
HIGHER EDUCATION FREED-HARDEMAN UNIVERSITY
HENDERSON, Tenn. — Richard Eleby, living in Biloxi, Miss., recently earned a master of ministry degree, the first Freed-Hardeman student to complete his graduate degree entirely online.
More than half of FHU students involved in master’s programs in Bible take at least part of their courses online. Students participate online live in 16 states as well as India, Australia, Korea and Russia.
“Offering our degrees online gives us the opportunity to extend our reach … to many people who are not in the position to uproot their families,” said Mark Blackwelder, director of graduate studies in Bible. “For many people engaged in a career in ministry, this can make the difference between getting a graduate degree or spending years wishing they could.”
HARDING UNIVERSITY SEARCY, Ark. — Harding President David B. Burks announced he will retire at the end of the 2012-13 academic year, after 26 years at the helm. Burks, 68, is the fourth president in Harding’s 87-year history.
“In 2006, the board extended my contract and asked me to work until age 70,” Burks said. “It should not come as a surprise to anyone that I am planning to retire. … I will do everything I can to make sure the transition is as smooth as possible.”
In Burks’ tenure, Harding has grown from 2,997 students to 7,155 and completed $250 million in capital projects.
OKLAHOMA CHRISTIAN UNIVERSITY OKLAHOMA CITY — The scenario Oklahoma Christian cross country head coach Mark Thompson had pictured months earlier came to happen on a recent Saturday morning.
Thompson hadn’t shied away all season from talk that his Eagles could win the NAIA men’s national championship, and they went out and did so in dominating fashion on a brisk fall day at the Fort Vancouver National Historic Site in Washington state.
“We thought going in, if we really executed well, we’d win, and we executed well, better than I expected,” Thompson said.
With three runners — Silas Kisorio, Geoffrey Njonjo and David McWilliams — finishing in the top 20, the No. 1-ranked Eagles posted a team score of 93, well ahead of second-place California State-San Marcos. The national championship was the first in the Oklahoma Christian cross country program’s history.
K-12 CHRISTIAN SCHOOLS DAVID LIPSCOMB CAMPUS SCHOOL NASHVILLE, Tenn. — The campus school received a $10 million gift awarded by the Stephens Christian Trust — founded by Nashville resident Bill Stephens — to be used to support facilities and programs.
“In making this generous gift, the Stephenses are enabling us to begin putting form to the vision we have formulated for the campus school in recent years,” Lipscomb University President Randy Lowry said. “We hope to begin the first step in that vision, the renovation of our elementary school on Granny White Pike, within the next 18 months.”
Lipscomb Campus School is the largest private K-12 school in Middle Tennessee with nearly 1,400 students. Owned and operated by Lipscomb University, it’s one of the few secondary schools in the nation located on a university campus.
MEDIA MINISTRIES HERALD OF TRUTH MANAGUA, Nicaragua — Christians in this Central American nation distributed 40,000 brochures during a recent evangelistic campaign. The campaign also included live radio broadcasts, door-to-door invitations, a seminar for marriage enrichment and three gospel meetings.
Herald of Truth workers Tim Archer, Rigoberto Vargas and Bruno Valle coordinated the campaign. Forty-three Churches of Christ in Nicaragua partnered in the work.
“Any time we touch thousands with the message of Christ, we feel we have been successful,” Archer said.
“For this campaign, that feeling is accentuated by eight baptisms and the initiation of more than 30 personal studies being conducted by our brethren in Managua.”
Juan Monroy, another worker with Herald of Truth, plans to travel to Nicaragua for a follow-up campaign.