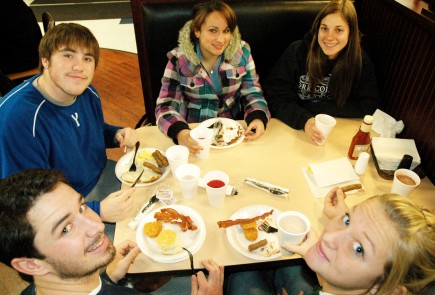 CAMPUS MINISTRY WOLFLIFE CAMPUS MINISTRY JONESBORO, Ark. — Eight months after receiving approval to change its name from the Church of Christ Student Center to Red Wolves for Christ, the campus ministry that serves Arkansas State University again has a new name.
Campus ministry director Chris Buxton said a university attorney informed him that “Red Wolves” is trademarked by the university, and the name change was granted inadvertently.
As a result, the ministry’s board voted to adopt the name WOLFLIFE Campus Ministry, which “joins the ASU mascot with the abundant life that comes through Christ,” Buxton said.
CHILDREN AND FAMILIES SUNNY GLEN CHILDREN’S HOME SAN BENITO, Texas — Ten miles from the Mexico border, Sunny Glen Children’s Home begins its 75th year in 2011.
“There are only 900 members of the Church of Christ in the Rio Grande Valley,” said Jay Williams, the home’s executive director. “But we have survived as a Church of Christ children’s home for almost 75 years.”
In June 2010, Sunny Glen started a new program called “Cradle of Hope” that helps unmarried teen moms who do not have a home and want to keep their children, Williams said. For more information, see www.sunnyglen.org.
HIGHER EDUCATION ABILENE CHRISTIAN UNIVERSITY ABILENE, Texas — Immersed in a different culture and continent, ACU students and faculty members brought to fruition the university’s mission of service and leadership throughout the world.
Students studying abroad in Montevideo, Uruguay, recently participated in a worldwide effort to raise money for AIDS orphans in Kenya through a 5K run.
“Running along the beach of South America for the needs of children around the world was one of the most satisfying experiences,” student Kendyl McEachran said.
LIPSCOMB UNIVERSITY NASHVILLE, Tenn. — Lipscomb will launch a new doctoral degree in ministry in fall 2011, Provost Craig Bledsoe announced.
The doctor of ministry degree, or D.Min., in missional and spiritual formation will be offered through a partnership between Lipscomb’s Institute for Christian Spirituality and the Hazelip School of Theology.
“We want to train leaders to deepen their participation in the missional heart of God through the spiritual disciplines,” said Earl Lavender, executive director of the Institute for Christian Spirituality.
OHIO VALLEY UNIVERSITY VIENNA, W.Va. — OVU is offering new courses in Mandarin Chinese.
The university requires a diversity experience before graduation.
Two semesters of Chinese can fulfill that requirement, said Steve Hardy, dean of the College of Arts and Sciences.
“One-fourth of the planet’s population speak Chinese as their first language,” Hardy said. “By speaking both English and Chinese, (a student) will be able to converse with one-half of the entire human race.”
OKLAHOMA CHRISTIAN UNIVERSITY OKLAHOMA CITY — A three-person team will oversee Oklahoma Christian’s church relations efforts until a full-time director can be found to succeed Nathan Mellor, who left at the end of December.
The three-person team will be Kent Allen, vice president for university relations; Bob Rowley, senior advancement officer; and Stafford North, distinguished professor of Bible.
“I am very pleased that we have on the OC staff these three men who have such long-term ties and deep love for the Churches of Christ,” President Mike O’Neal said.
WESTERN CHRISTIAN REGINA, Saskatchewan — Western Christian College and High School is partnering with Faulkner University in Montgomery, Ala., to offer two accredited degrees.
In October 2010, the Canadian college became an extension site of Faulkner, making available two new associate’s degree programs on the Regina campus.
Western Christian’s own programming will concentrate on religious studies and offer associate’s and bachelor’s degrees in religion, academic dean Bill Schwarz said. Faulkner’s offerings will focus on general studies and science.
K-12 CHRISTIAN SCHOOLS COLUMBIA ACADEMY COLUMBIA, Tenn. — Starting in fall 2011, Columbia Academy will provide every student in grades seven to 12 with an Apple iPad. Students in lower grades will also have access to iPads, which will be provided as
instruction tools for teachers.
“This is a major turning point for … our ability to prepare our students for college, career and life success,” President James Thomas said.
MINISTRY TRAINING BRITISH BIBLE SCHOOL ANTWERP, Belgium — Patrick Boyns and Trevor Williams, representing the British Bible School, traveled to Belgium to teach a series of lessons on studying the Bible.
About two dozen members of the Deurne Church of Christ attended. The teachers’ lessons were translated into twi, a language of Ghana, for the benefit of the church’s sizeable Ghanaian membership.
“I am fairly used to being translated into a local language,” Boyns said, “but this was the first time (I was) translated into an African language in Europe.”