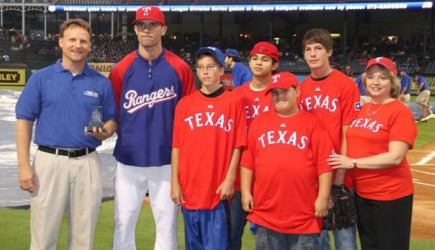 Staff
KELLER, Texas — When All-Star third baseman Michael Young was named the Texas Rangers’ nominee for the 2009 Roberto Clemente Award, he won a $7,500 prize from Chevrolet to give to the charity of his choice. Young told the Rangers he wanted the money to benefit a children’s home — along with a donation of his own.
With help from Taunee Taylor, the team’s assistant vice president for player and community relations, Young chose Christ’s Haven for Children, which is associated with Churches of Christ.
Christ’s Haven’s director of development, Karen Yarbrough, and four boys from the home joined Young at Rangers Ballpark when he accepted the nomination.
The award recognizes exceptional on-field performance combined with devoted work in the community.

EVANGELISM
AGAPE BIBLE STUDIES GADSDEN, Ala. — The ministry, based at the Rainbow church, has a new Web site to help deliver Bible correspondence courses.
“These courses lead to conversion,” ministry director Ray Cox said. “We have averaged more than 100 baptisms annually for the past several years using the postal system, teaching only Americans.”
For more information, see the Web site at agapebiblestudiesonline.org.

OKLAHOMA CHRISTIAN UNIVERSITY OKLAHOMA CITY — The campus received a special delivery recently: 1,300 trees.
The donation came out of a partnership between the Tree Bank Foundation and the Apache Foundation.
Most of the trees will line the planned walking trails that will encompass the campus and connect with trails in the nearby city of Edmond.
Pendleton Woods, director of the American Citizenship Center at Oklahoma Christian, has served as a member of the Tree Bank board for 15 years and played an integral part in securing the donation.
The university honored Woods, a former World War II prisoner of war, by naming a grove of the trees in his honor.
K-12 CHRISTIAN SCHOOLS   GREATER ATLANTA CHRISTIAN SCHOOLS NORCROSS, Ga. — Starting next fall, all 1,400 sixth- to 12th-graders will receive an Apple MacBook laptop computer loaded with school-provided software.
School spokeswoman Jill Morris described the move as the “next step in 21st century digital learning.” She said it will make Greater Atlanta Christian the largest K-12 digital learning environment in the nation, with each student receiving a MacBook and an iPod Touch.
“The skills needed for thinking, collaborating and decision-making are expanding,” said David Fincher, the school’s president. “This change is less about the particulars of the digital tools and more about the world in which we all live, work, research and learn.”

MINISTRY TRAINING   MEMPHIS SCHOOL OF PREACHING MEMPHIS, Tenn. — The school’s Center for the Study of Alcohol and Bible Wines awarded its first scholarship to Gordon Wells, a native of Cape Town, South Africa.
The benefactor of the program, Victor Durrington, “was a stern opponent of the use and abuse of alcohol and saw education along that line as a great tool for the Bible student,” said Daniel Cates, an instructor at the school.
Wells and future recipients of the scholarship will be responsible for producing research on the history and dangers of alcohol, Cates said.