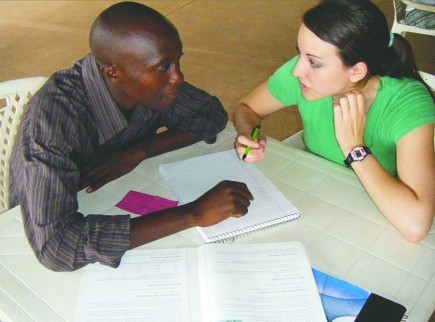 From Staff Reports
BIBLE CAMPS ARIZONA CHURCH OF CHRIST BIBLE CAMP TUCSON, Ariz. — Extreme fire dangers that prompted the closing of the Coronado National Forest shut down the Arizona Church of Christ Bible Camp on Mount Graham, leaders said.
However, the board of Ponderosa Christian Camp in New Mexico made it possible for the Arizona campers to rent that facility at a reduced rate, said Jessica Knapp, youth minister of the Mountain Avenue Church of Christ in Tucson.
“Camp is a really special time for our kids,” Knapp said. “These mountaintop experiences are often life-changing for the teens we reach.”
CHILDREN AND FAMILIES ARMS OF HOPE DALLAS —  Arms of Hope, a ministry associated with Churches of Christ that serves at-risk children and single mothers on two Texas campuses, is initiating a pilot program for single-mother families in Dallas County.
The Urban Together project will help families make the transition from homelessness, poverty and abuse to successful futures, said Kevin McDonald, Arms of Hope’s president and CEO.
HIGHER EDUCATION LUBBOCK CHRISTIAN UNIVERSITY LUBBOCK, Texas — The LCU chorus, conducted by Philip Camp, recently completed its third concert tour in the eastern European nation of Ukraine.
The chorus coordinates its tours with Eastern European Mission. The tours are designed to encourage European churches and support possibilities for EEM’s Bible distribution programs in new areas, Camp said.
Chorus members from past tours have returned to Ukraine to work in EEM’s summer youth camps.
Caleb and Kendra Harrelson, former LCU choir students, serve as full-time missionaries in Kolentsi, Ukraine.
PEPPERDINE UNIVERSITY MALIBU, Calif. — With the theme “The Path of Discovery,” the 31st annual Christian Scholars Conference promoted harmony between the scientific and Christian communities.
“Many in the academy are coming to see that science devoid of values is dangerous, while many Christians are discovering that faith without intellectual foundation is suspect,” Pepperdine Provost Darryl Tippens said.
More than 300 scholars from 90 universities participated in the recent conference. Thomas H. Olbricht, distinguished professor emeritus of religion at Pepperdine, was awarded an honorary doctorate for long embodying “the highest academic and collegial standards in addition to founding the Christian Scholars Conference.”
SOUTHWESTERN CHRISTIAN COLLEGE TERRELL, Texas — Guss Dunn Farmer Sr., who served as head of the Bible department and taught Bible and Greek during his 56 years with the historically black college, died June 8. He was 95.
“Dr. Farmer was probably the favorite professor of many at SWCC from the ’50s till the ’90s,” said Matthew L. Terry Sr., minister of involvement for the Hutchins Church of Christ in Texas. “He taught a great number of preachers in the brotherhood.”
Terry praised the “awesome sacrifice, love and dedication” displayed by Farmer, who was white. The 1989 Southwestern graduate said that in the 1950s — “in the pre-era of civil rights” — Farmer dedicated himself to a “very poor, struggling black Christian college.”
K-12 CHRISTIAN SCHOOLS HARDING ACADEMY SEARCY, Ark. — Fourtify, a quartet from Searcy, was chosen to appear on “America Sings,” a competition airing on the Gospel Music Channel.
Kittrell Camp, Emily Eads, Lindsey Farley and Jordan Simpson, all members of the College Church of Christ, formed the quartet while they were students at Harding Academy.
Their repertoire includes a cappella gospel songs, such as “How Deep the Father’s Love,” as well as contemporary music such as “For Good” from the Broadway musical “Wicked.”
PUBLICATIONS THINK MAGAZINE NASHVILLE, Tenn. — Focus Press has reached an agreement to sell Think magazine in Borders bookstores.
The 5-year-old publication already was carried in Chapters bookstores in Canada.
“One of the goals Focus Press had from its inception was to get solid Christian material into secular bookstores — competing alongside of worldly magazines,” said Brad Harrub, Focus Press director and co-founder.