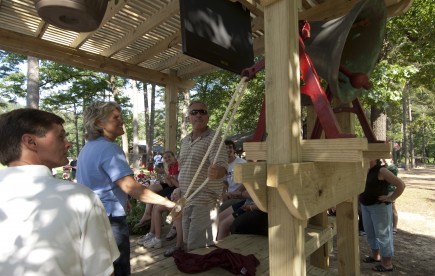 Staff Reports
Memorial honoring slain Harding graduate dedicated
Dennis and Terri Rine ring a bell created at Camp Tahkodah in Floral, Ark., to honor the memory of their daughter Micah Rine Pate, 26, a Harding University graduate killed in an April 30 shooting in Bartlett, Tenn. Zeta Rho, the social club to which Pate belonged while at Harding, approached the camp about creating a bell and gazebo in her memory. Friends and relatives of Pate gathered at the camp recently to dedicate the memorial. Pate grew up spending summers at Camp Tahkodah, a Christian summer camp on a 1,350-acre site in the Ozark Mountains.
From baseball to softball
LUBBOCK, Texas —  Best known as the former baseball coach at Texas Tech and Lubbock Christian, Larry Hays has a new job — as head softball coach at Lubbock Christian.
Hays, an elder at the Green Lawn church in Lubbock, succeeds his son Shanon, who started the women’s softball program and left to accept the head coaching position at Texas Tech.
The former professional softball pitcher “always places God first, family second and coaching third,” said Chris Due, athletic media relations director at Lubbock Christian.
Hays coached his first 16 seasons at Lubbock Christian, where he is the all-time baseball win leader at 695. In 22 seasons at Texas Tech, he won more than 800 games. He stepped down as one of only four baseball coaches in NCAA history to achieve more than 1,500 wins.
GLOBAL EVANGELISM
WORLD BIBLE SCHOOL
CEDAR PARK, Texas — World Bible School has posted its entire curriculum— a resource base that has served millions of users globally — on theWorld Wide Web.
This interactive format is a new study option for WBS enrollees that is “accessible by anyone, anytime.”
WBS President John Reese describes the move as “one of the biggeststeps the organization has taken in its 36-year history.”
Citing amounting demand worldwide for Bible education, Reese said that requestsfor services had been pushing the limits of WBS’s abilities to satisfythe greater numbers, despite the fact that the nonprofit has some14,000 volunteer teachers and follow-up workers around the world.
More than 1 million people enrolled in free World Bible School coursework over the past year, according to Reese.
For more information, see www.worldbibleschool.net.
HIGHER EDUCATION
ABILENE CHRISTIAN UNIVERSITY
ABILENE, Texas — ACU is one of the best colleges in the nation to workfor, according to a survey published recently by The Chronicle ofHigher Education.
The higher education newspaper surveyed nearly 41,000 administrators,faculty members and staff members to determine which institutions wouldbe recognized as standouts in the 26 recognition categories forfour-year institutions.
HARDING UNIVERSITY
SEARCY, Ark. — NASA has awarded a team of Arkansas researchers a $1.5million grant to develop a system to search for life on Mars. The teamincludes Harding professors Edmond Wilson and Constance Meadors.
Wilson and Meadors are members of the Arkansas NASA ExperimentalProgram to Stimulate Competitive Research team. The team won for itsproposal titled “Mobile Surveying for Atmospheric and Near-SurfaceGases of Biological Origin” during a national competition and was among27 teams NASA selected for funding.
LIPSCOMB UNIVERSITY
NASHVILLE, Tenn. — The musical group Acappella performed during theclosing event of Lipscomb University’s 2009 Summer Celebration, singingbefore a crowd estimated at 4,000 people gathered in the university’sAllen Arena Mall.
Earlier in the day, former members of the Acappella Vocal Band — agroup formed as backup for Acappella in 1986 that went on to performand record independently until 2000 — sang together during a reunionconcert in Lipscomb’s Collins Alumni Auditorium.
“It’s hard to put into words how awesome it was to see and sing with everybody,” said Wes McKinzie, AVB bass from 1988 to 1995.
OHIO VALLEY UNIVERSITY
VIENNA, W.Va. — OVU welcomed 365 people to its campus for a recent summer             a cappella quartet concert.
“We expected around 100 people, hoped for 250, but were overwhelmedwith 365,” OVU church relations director Tom Butterfield said of thespecial concert. “This was the first time to host an event like this ina long time, and we had a fantastic outpouring of support andenthusiasm.”
Seven a cappella quartet groups were featured: Brothers, Father andSon, The Harmony Four, The Miller Brothers, One-A-Chord, Vocal-A-Chordand a special appearance by OVU’s a cappella vocal group, Express.
“We had people drive from Pennsylvania, Ohio, Kentucky and Virginiaspecifically for this event,” Butterfield said. “There is nothing morebeautiful than the blending of voices without musical instruments.
“With so few concerts like this, people are willing to come from nearand far to enjoy an evening of southern gospel music with theirfamilies. We hope folks will put this on the schedule for the nexttime.”
OKLAHOMA CHRISTIAN UNIVERSITY
OKLAHOMA CITY — Oklahoma Christian recently announced the offering of the university’s first completely online degree.
Master of business administration students now will have the optionsof online, onsite or blended curriculum to earn the 36 credit-hourdegree.
Like the Fast Track onsite class curriculum, Oklahoma Christian’sonline MBA degree can be completed in one year, said Ken Johnson,director of graduate business studies.
YORK COLLEGE
YORK, Neb. — York College will receive a $2 million federal grantthrough the “Strengthening Institutions” program, the U.S. EducationDepartment announced.
In a competitive process, York’s grant application identified enhancedtechnology and student support services as areas critical to studentsuccess.
“Academic technology has experienced a real explosion over the past fewyears,” York President Steve Eckman said. “The tools available now areincredibly powerful, but they are also incredibly expensive.
“This award will allow us to purchase hardware and software that willenhance students’ ability to access electronic information and mediasources.”