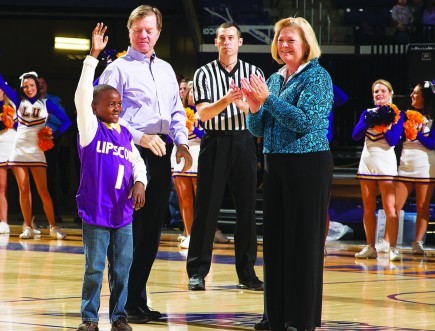 FROM STAFF REPORTS
CHILDREN AND FAMILIES MOUNTAIN STATES CHILDREN’S HOME LONGMONT, Colo. — Readers of The Christian Chronicle showed their generosity after reading about the theft of $6,000 in change donated to the home.
Church members responded to news of the lost coins by donating more than $12,000, said Randy Schow, the home’s executive director.
“We are very grateful to our God for how good he is,” Schow said, “and yet we are saddened because of the loss (after) so many worked hard at saving their change to help children.”
EDUCATION MINISTRY CHRISTIAN EDUCATION ASSOCIATION BELTON, Texas — The association held its recent 51st annual conference at a retreat center near Belton. Sixty-eight people attended.
Outgoing association President Steven Yeakley scheduled the conference at a retreat center to allow attendees to connect with each other and with experts in children’s education, adult education and leadership.
Dewey Howard, education minister for the Green Lawn Church of Christ in Lubbock, Texas, served as chairman of the conference and received the 2012 Holbert Rideout Excellence in Christian Education Award.
HIGHER EDUCATION AUSTIN GRADUATE SCHOOL OF THEOLOGY AUSTIN, Texas — “Psalmfest 2012,” jointly sponsored by the graduate school and the Brentwood Oaks Church of Christ, drew a crowd of about 200.
The recent event celebrated the Psalms with songs, readings and meditations. Singing groups presented selections from “Timeless: Ancient Psalms for the Church Today, Volume One,” published by ACU Press.
Speakers included Andrew Dearman, Jack Reese and David Worley. “Timeless” is a combination psalter and commentary on Psalms by Mark Shipp, a professor at Austin Graduate School of Theology.
CROWLEY’S RIDGE COLLEGE PARAGOULD, Ark.  — The college recently hosted a groundbreaking ceremony for the Joe A. and Wanda Hall Johnson honor housing project.
The college plans to construct two honor housing triplexes initially, each housing a married couple in one apartment and four single students in the other two.
FAULKNER UNIVERSITY MONTGOMERY, Ala. — Faulkner is initiating a technology initiative dubbed “Eagle iAdvantage.”
Starting this fall, all traditional students on the Montgomery campus will receive an iPad equipped with university-provided general and discipline-specific apps.
Faulkner also plans to adopt as many e-texts as possible across all disciplines with the intention of saving hundreds of dollars in textbook costs for students, President Billy D. Hilyer said.
“We want our students to enter the workforce prepared to meet the expanding demands of technology, and the use of iPads, apps and e-texts are just a few of the tools in our Eagle iAdvantage technology initiative,” Hilyer said.
HARDING UNIVERSITY SEARCY, Ark. — Harding has launched a website to accept applications and recommendations for its next president.
President David Burks plans to retire at the end of the 2012-13 academic year after 26 years at the helm.
To offer feedback, see www.harding.edu/presidentialsuccessionprocess.
ROCHESTER COLLEGE ROCHESTER HILLS, Mich. — Rochester is producing a new, daily audio devotional for friends and alumni.
The short inspirational message, called “Directions,” is designed to provide daily encouragement and direction for living.
A variety of Rochester College personnel, including Rubel Shelly, Garth Pleasant, Tom Rellinger, Sara Barton, Mark Love, Lora Hutson and others, will record the messages.
To receive a daily e-mail with the audio link, see www.rc.edu.

YORK COLLEGE YORK, Neb. — York plans to build a 15,600-square-foot activity center on campus and name it in honor of Colis and Dolores Campbell, who served the college in a number of capacities from 1958 to 1975.
A donor who requested to remain anonymous will fund the project, estimated to cost more than $1 million.
“With recent enrollment growth, our capacity to serve the needs of our student body has been stretched to the limit,” President Steve Eckman said.
The multipurpose facility will include an athletic court that can be used for banquets and other large gatherings such as chapel.