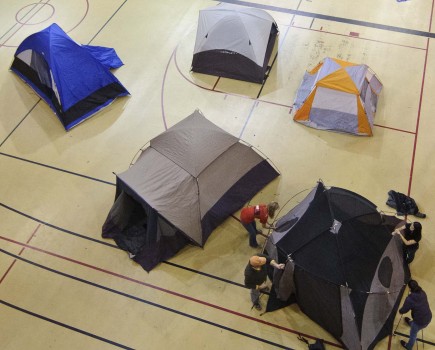 FROM STAFF REPORTS
CHILDREN AND FAMILIES
THE TIPTON HOME TIPTON, Okla. — When a snowstorm knocked out power to the children’s home campus, executive director Dennis Smith welcomed more than three dozen guests to his house.
“We played a lot of games and had a lot of fun,” Smith said. “Now, the kids keep asking when they can come back to stay at my house.”
Fifty children and adults attended a church service in Smith’s garage.
While at his house, the children competed in a T-shirt contest. The winning design soon to be worn by Tipton residents: “Survivor 2010 — Iced Out.”
HIGHER EDUCATION   ABILENE CHRISTIAN UNIVERSITY ABILENE, Texas — ACU’s student-run media plans to produce the first newspaper of its kind for Apple’s new iPad device.
Cheryl Bacon, chairwoman of ACU’s Department of Journalism and Mass Communication, says students and faculty members are working to achieve the goal.

HERITAGE CHRISTIAN UNIVERSITY FLORENCE, Ala. — Ralph David Underwood, a Bible professor at Heritage Christian for 35 years, died Feb. 12. He was 81.
Underwood began preaching at age 20, ministering across the U.S. and serving as a missionary across the Caribbean and in West Africa. He served as an elder of the Chisholm Hills church in Florence for 25 years.
Survivors include his wife, Myra; daughter, Rebecca Dorfmueller; sons, David and Bryan; six grandchildren; a great-grandson; and two sisters.
LIPSCOMB UNIVERSITY NASHVILLE, Tenn. — The College of Bible and Ministry plans to establish the Institute for Christian Spirituality, dedicated to nurturing personal spirituality and discipleship of Christ and directed by Earl Lavender.
The institute will kick off its efforts March 2 with a seminar featuring John Ortberg, author of “The Me I Want to Be: Becoming God’s Best Version of You.”
Among the institute’s offerings will be:
• A one-year certificate program to learn and develop spiritual disciplines.
• An 18-month program for those who want to become a “spiritual director.”
• A master of divinity degree and a master’s in theological studies with an emphasis on spiritual formation, offered through the Hazelip School of Theology.
• Conferences, academic writings and research on Christian spirituality.

LUBBOCK CHRISTIAN UNIVERSITY LUBBOCK, Texas — Lubbock Christian’s board voted unanimously to extend the contract of President Ken Jones.
Jones, president since 1993, has signed a new contract that extends his role as president and provides for him to transition into the role of chancellor in future years.
“We are thrilled that Dr. Jones accepted this extension,” board Chairman Jerry Harris said.
SOUTHWESTERN CHRISTIAN COLLEGE TERRELL, Texas — Southwestern Christian is praising God after receiving a $345,000 gift to help construct a foundational arts building.
Thomas Foster, minister of the Missouri City, Texas, church, and leaders of a proposed Houston Christian Institute donated the money.
They raised it for the proposed institute but determined they could not afford to operate a school.
The donation will help build Southwestern “into a more powerful instrument for the good of humanity and the glory of God,” President Jack Evans said.
K-12 CHRISTIAN SCHOOLS   COVENTRY CHRISTIAN SCHOOLS POTTSTOWN, Pa. — With Coventry Christian facing financial difficulties, secondary school Principal Paul Fisher has come up with a unique way to raise funds.
After nine years and 27 attempts, Fisher has qualified to participate in the Boston Marathon on April 19 — and he’s using his run to generate support for the school’s ministry.
“It just seemed like a good idea to use the spiritual analogy of running the race to inspire others to help us with the race we are running at Coventry,” said Fisher, a graduate of Harding University.