On Thursday morning, minister Joe Glenn got a call at his Paradise Church of Christ office.

A friend in the 50-member Northern California congregation, which Glenn has served for nearly 15 years, warned the preacher, “We’ve been ordered to evacuate.” 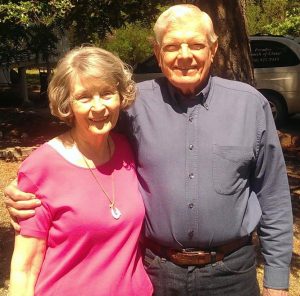 A fast-moving wildfire was roaring toward the community of 27,000, about 180 miles northeast of San Francisco.

“I looked outside and saw ashes falling like snowflakes,” said Glenn, 81, a 1962 graduate of then-Abilene Christian College in West Texas.

The minister called Pat Glenn, his wife of 57 years, at their home behind the church building and told her they needed to leave in a hurry.

They loaded their rescue dogs, Bambi and Cheska, and their cats, Bib and Boo, into the couple’s cars. Then they joined their son, Curtis Glenn, who was driving his truck, in a clogged procession out of town.

The family escaped the blaze — which would destroy the church building and most members’ homes — “with the clothes on our back,” Joe Glenn said. More than 8,800 structures — mostly homes in Paradise — were leveled as the blaze charred the region, according to the Los Angeles Times.

In a telephone interview Wednesday from a Motel 6 in Williams, Calif., about 65 miles southwest of Paradise, the minister talked with The Christian Chronicle.

The interview has been edited for length and clarity.

Question: Tell me about Paradise and the church there.

We had a beautiful building. An elder had put in a stained glass up at the top of the building, and the sun would shine through the auditorium. About 12 years ago, we remodeled the inside of the building and put chairs in, with beautiful blue carpet.

Q: How close was the fire when you left?

A: By the time I got out of the building, all the streets were full of cars. It was about 9 o’clock in the morning, but with all the smoke, it was as black as midnight.

A: I would say it was scary. But we were so concentrated — my son in his truck and my wife and I in our cars — and we just crept until we could get out of town.

We were going to go to Chico, which is where my daughter lives. But the fire wouldn’t let us, so we ended up heading toward Yuba City. And my wife was calling, trying to find a motel room, and we finally found one over here.

As we were driving down the road, flames were coming across the hills. It took us an hour and a half to go what usually takes us eight minutes to go because we were in bumper-to-bumper traffic getting out of town.

Officials allowed FOX40 and other media outlets to fly drones over Paradise Tuesday morning. This is what the town looks like after the Camp Fire destroyed businesses and thousands of homes: http://via.fox40.com/myEiH

Q: What goes through your mind when you see what has happened to Paradise?

A: Fox 40 in Sacramento flew a drone across the city, and it was on TV this morning. It looks like Hiroshima. It looks like an atomic bomb has been dropped.

Your heart goes out to 40,000 people — 27,000 in Paradise and the rest in Magalia, where my secretary and her husband and several of our members lived.

So far, the homes of only two people in our church survived. Every other house is burnt up.

Q: Were those who suffered losses — the church, your family, other members — insured?

A: The church had excellent insurance. We had insurance on the contents of our house. In fact, both of our insurance companies have been very, very good. They’ve taken good care of us already.

I believe most of our members were insured, but I haven’t been able to talk to everyone because they are scattered all over.

Hundreds are still missing after the Paradise fire. I spent yesterday with crews searching for bodies. It's grueling. Most crews are volunteers. Why do this? I asked one man after he'd dug through 10 homes. “We serve so that others may live,” he said. “Families need closure.” pic.twitter.com/mYeSydnju0

Q: The statewide death toll from the California wildfires has hit 51. Did all your members survive?

A: Everybody that we know of escaped the fire.

Some of our members drove through flames on both sides of the road because they came after we did.

One of our ladies couldn’t get to her car, so she just took her son and started running. And some people picked them up and took them down to Chico.

“One of our ladies couldn’t get to her car, so she just took her son and started running.”

Q: Will you and the church rebuild there in Paradise?

A: That is our plan right now. But I haven’t been able to meet with all of the guys yet. It’s assumed that that’s what we’re going to do.

Q: Were you able to collect any belongings before you fled?

A: We didn’t have time. I’ve got some manuscript stuff that I’ve been working on, and I dumped that into my briefcase and put it in the car. (He explained that he has been writing one book on the cross and another on Jesus.)

Then we grabbed one fire box that had some money in it that we’d been putting back. Because of the fear of fires, we wanted to have extra money.

These abandoned and burned out cars shows you what a panic it must have been for residents trying to escape the Camp Fire. Unreal scenes in Paradise, CA, this morning. #CampFire pic.twitter.com/AhBuWzS0Tx

Q: How do you even begin to describe what you’ve lost?

A: You know, all the books you gather up over 60 years — everything’s gone.

My whole library is gone.

And of course, I had all kinds of Bibles. I had written a book on marriage back in 1974, “Marriage Is for Husbands, Too,” and I had several copies of that. They’re all gone. My whole library is gone.

Q: But I understand that you consider yourself blessed that you survived?

A: God is good. Paradise is lost. We are OK. It is going to take many months before Paradise is rebuilt. Keep us in your prayers!

A special account has been set up to help fire victims. Checks may be sent to: Chico Church of Christ, 995 E. Lassen Ave., Chico, CA 95973, Attn.: Paradise Fire Fund.