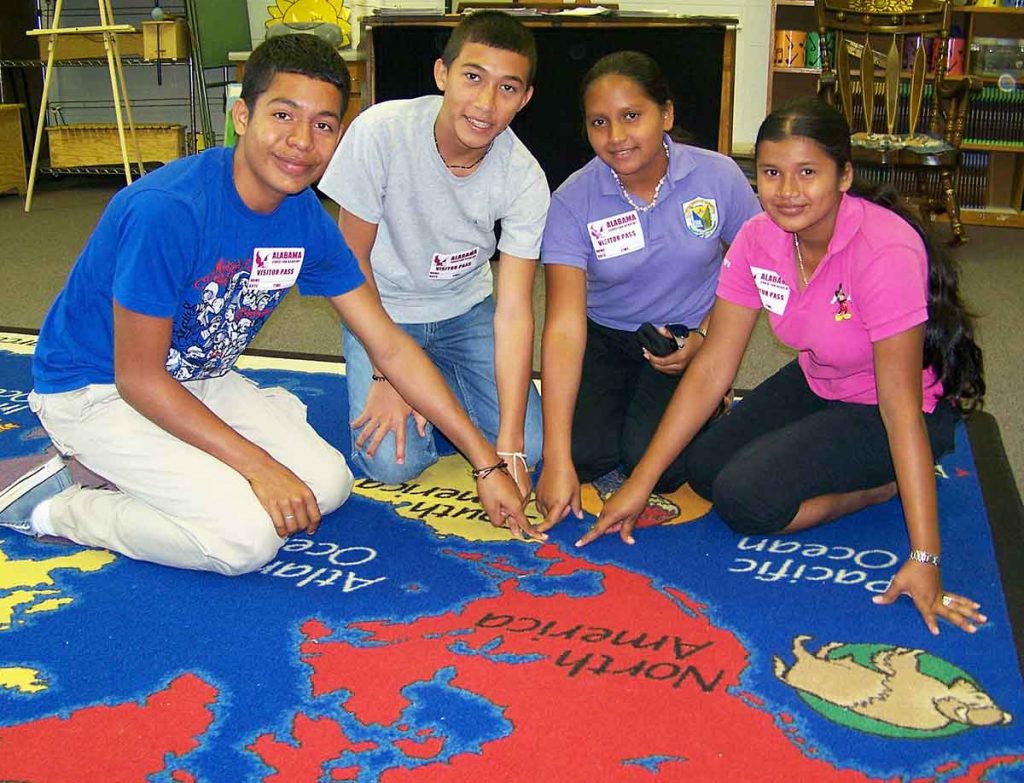 Panamanian Christians get a taste of ‘Sweet Home Alabama’ 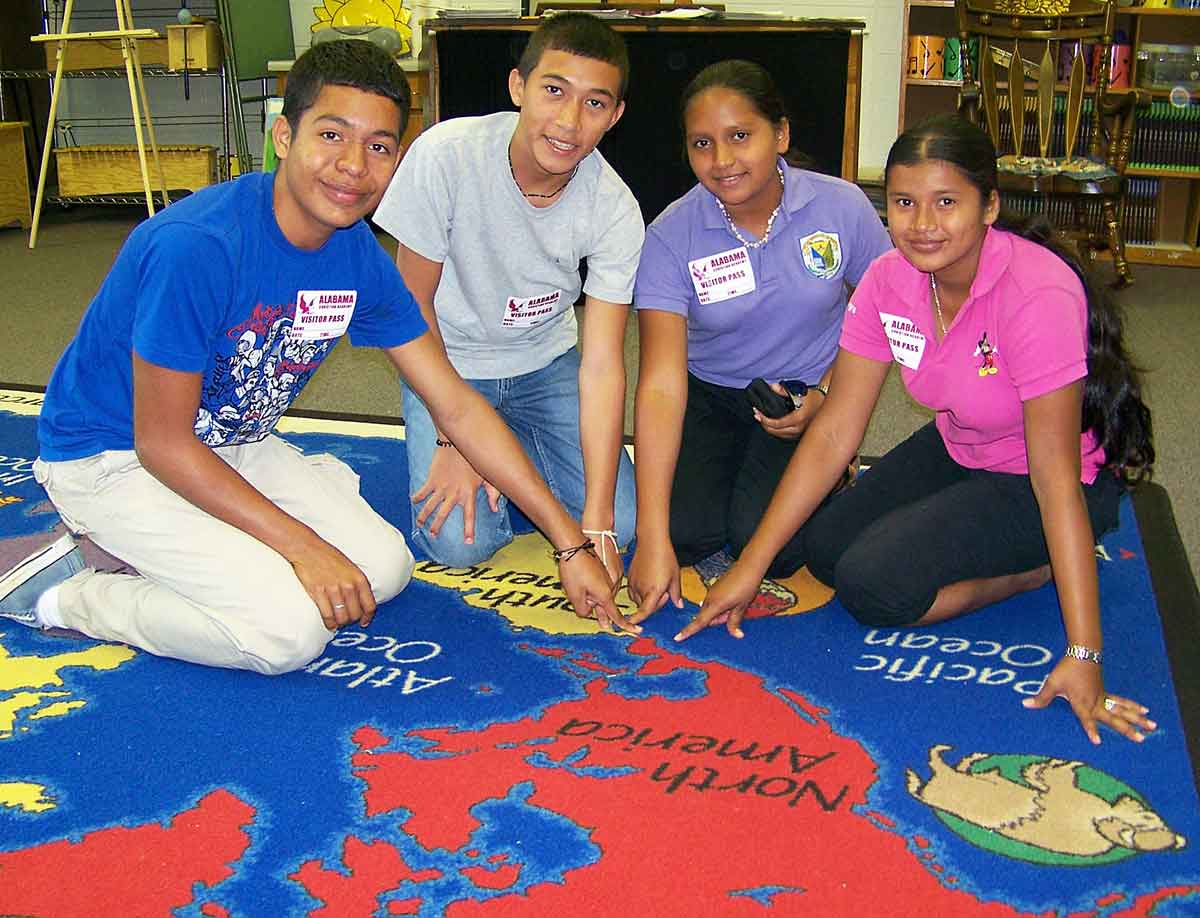 Juan Carlos Pimentel, Edward Calderon, Amelexia Santos and Rosemary Sanchez point to their home nation, Panama, on a map during a visit to a school in Alabama. (Photo provided by Sara Bills)

Christians in Alabama treated four high school students from the Central American nation of Panama to down-home Southern cooking, the NASA Space Center in Huntsville and a visit with Alabama Governor Bob Riley. 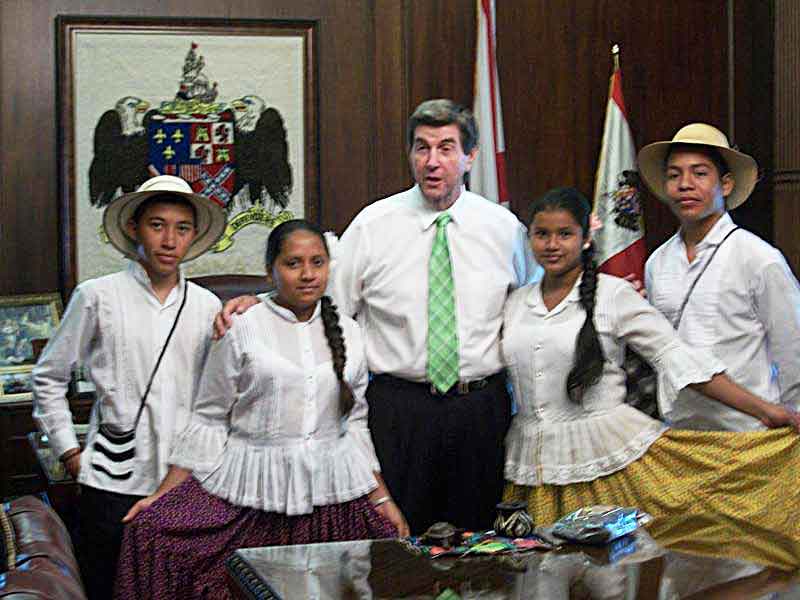 The four teens traveled to the U.S. through a scholarship program sponsored by Panama Missions.
“We choose promising students from poor circumstances who we feel will benefit from the experience,” said the ministry’s director, Larry Brady, an elder of the Davenport, Ala., Church of Christ. “Our message to them is, ‘You can break the cycle of poverty by setting goals for your life that include high moral, spiritual and educational standards.'”
The four students are from two of the largest Churches of Christ in Panama. Edward Calderon, 16, is from Sanson where his father, Jose, is the minister. Juan Carlos Pimentel, 16, is from Torti, where his father, Manuel, is the preacher. Rosemary Sanchez, 16, and Amelexia Santos, 14, are also from the Torti congregation.
Brady and his wife, Betsy, hosted the students for part of their visit. They also stayed with sponsoring families and participated in youth activities with groups from several Alabama Churches of Christ. The Childersburg, Ala., Church of Christ oversees Panama Missions.
I traveled to Panama with Larry and a group from Panama Missions last December and reported on the ministry’s Operation Christmas Joy. We traveled across the Panamanian countryside — to a region few tourists see because of its proximity to the country’s dangerous border with Colombia — and handed out.gif?Action=thumbnail&Width=460&algorithm=proportionalt-wrapped boxes of Barbie dolls, Hot Wheels cars, jump ropes and hygiene items to children. I know it’s a bit early for Christmas carols, but here’s a video from that trip:

In a Kuna Indian village I met Hermiliana, who traveled to the U.S. in the scholarship program in 2009. Her village was one of the most strikingly beautiful places I have ever visited. The Kuna Indians live in distinct, triangular houses and the women wear elaborate beadwork on their arms and legs. 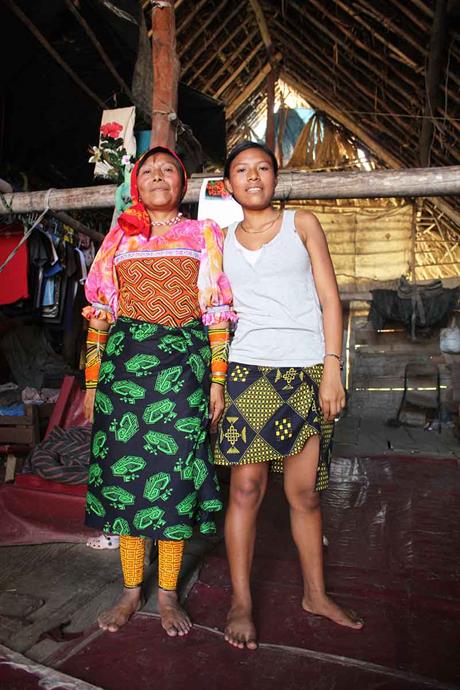 The Christians there suffered persecution initially as they attempted to establish a church. But the village elders eventually came to accept them, partly because of the humanitarian work done by Panama Missions. Now the Iglesia de Cristo (Church of Christ) building sits on the edge of the village. It’s the first thing you see when you pull off the highway. The children sang hymns for us in Spanish and the Kuna language.
Exposing teens from places like this to life in the U.S. can be advantageous, but it also can create some cultural friction. For example, when girls in the Kuna villages reach a certain age, they cut their hair, signifying that they’re ready to marry. Hermiliana dreams of attending college, however, and wasn’t ready to marry, so she left her hair long.
I know that this is a problem missionaries from the U.S. encounter whenever they work among indigenous peoples. Where does culture end and faith begin? Can Christians spread the Gospel without disrupting a people’s traditions? Can Christians teach people to live counter-cultural lives without destroying their culture? Or should they? I know there are no easy answers here, but I appreciate your thoughts.