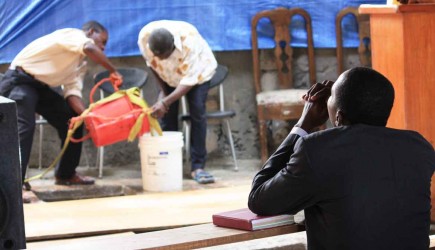 One year after quake, church rises from the rubble

Erik Tryggestad
PORT-AU-PRINCE, Haiti — Nearly one year after an earthquake claimed more than 230,000 lives here, members of the Delmas 28 Church of Christ gathered to praise God for his mercy.
Singing in Creole, more than 400 Haitian Christian squeezed into the wooden pews in the church’s humble meeting place, under reconstruction.
Maxius Gabriel stood at the entrance, a smile on his face and a bottle of sanitizer in his hand. He made sure every attendee got a squirt — a defense against Haiti’s raging cholera epidemic.
“Many of you have suffered a lot this year,” Harry Hames, Haiti coordinator for Healing Hands International, told the congregation during its Sunday worship.
“Amen!” shouted the Haitian Christians.
On Jan. 12, 2010, a 7.0-magnitude earthquake reduced the church building to a pile of rubble. Thirty-six nursing students who were using the building for classes died as it collapsed, as did their instructor. Fifty-one of the church’s 650 members died in the quake, and about 350 lost their homes, minister Jean T. Elmera said.
The suffering continued after the quake. In early November, Hurricane Tomas sideswiped the western tip of Haiti, causing floods and contributing to a cholera outbreak. As 2010 ended, violence in the run-up to elections closed the Port-au-Prince airport.
Hames, a member of the Beltline Church of Christ in Decatur, Ala., said that Haiti’s suffering in the past year reminded him of Job, the Old Testament figure who endured tragedy after tragedy without an answer from God.
“Why? Why the earthquake? Why the hurricane? Why the flood? Why the cholera? Why the demonstrations?” Hames asked, as Elmera translated his words into Creole. “God taught Job that it’s better to know God than just the answers.”
“Suffering can strengthen our faith or it can destroy it,” Hames said. “We have to make the choice. I see by you being here that you’ve made the right choice.”
As the service concluded, seven people asked to be baptized.
Churches of Christ in the U.S. and around the world have sent millions of dollars to Haiti in the wake of the disaster. Many church-supported ministries have contributed to relief here. Healing Hands continues to work here — drilling water wells and providing funds for construction of new church buildings and aid for orphans.
Elmera presented Hames with a plaque recognizing Healing Hands’ relief efforts in Haiti — and its dedication to the church.
“We know the greatest friends of Haiti are those who help us with the Gospel,” the minister said.
Despite the hardships faced by Christians in this impoverished nations, many church members said they are optimistic about the future.
“Maybe now God is going to send his blessing — more than before,” said Innocent Jean Charles, who started attending the Delmas 28 church about three years ago and was baptized here.
Charles said he considers the earthquake to be a sign from the Almighty.
“Because many people died, the people who are alive need to live very close to God,” he said.
RELATED BLOG POSTS
Trip report: A not-so ‘in-tents’ experience in Haiti

Out of the rubble: Boy adopted after Haiti earthquake adapting to life in Oklahoma
One year later, ministries continue Haiti relief work