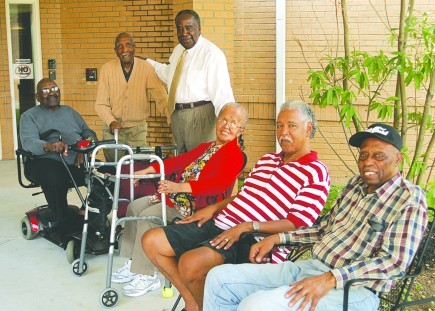 One pulpit for 50 years: For a half-century, Jones has fostered hands-on ministry

Ted Parks
NASHVILLE, Tenn. — When the Schrader Lane Church of Christ moved to its current location in 1968, members occasionally had to chase cows and hogs off the property, minister David Jones recalls.
Forty-four years later, the 15-acre campus is home to a licensed child-care center, a 21-apartment senior center and an assisted-living facility.
Jones preaches to nearly a thousand people every Sunday. The church tutors children, sponsors leadership training and academic enrichment programs and supports missions in Africa.
Jones recently celebrated five decades of ministry for the church, which met on Jefferson Street before moving to Schrader Lane, north of downtown Nashville.
Those who know him say Jones has done much more than just talk about the Gospel these past 50 years. He has given the message hands and feet, empowering the church to take on problems Nashville shares with many American cities: under-performing schools, crime and the hopelessness fostered by discrimination and poverty.
“He takes the doctrine of sin very seriously, but he also takes the doctrine of redemption very seriously,” said Rubel Shelly, who ministered for Churches of Christ in Nashville from 1978 to 2005. “He believes that redemption is not simply the forgiveness of sins, but it’s the empowerment of the Holy Spirit to be a servant to God to change the world in positive ways.”
EDUCATION AND DISCRIMINATION
The journey that led Jones to a half-century of ministry in Nashville began in northern Louisiana, where his father was a sharecropper. His mother helped support the family by cleaning the homes of whites.
Jones grew up Baptist, but that changed when his mother attended a tent meeting in 1954 in Bastrop, La., held by evangelists Luke Shearry and James Cooper. A white Church of Christ in town sponsored the two black preachers, Jones said.
When Jones’ mother told him she had finally found the church described in the Bible, he argued with her.
“I thought it was the craziest thing I’d ever heard of, because we were already in the church,” he recalled. “And those people had a tent.”
But Jones soon followed his mother’s example and was baptized. A handyman as well as a preacher, Shearry became a mentor to Jones. The two built a facility for the church that sprang from the tent meeting.
About a year later, Jones took advantage of one of the few educational opportunities in Churches of Christ open to black members — the Nashville Christian Institute, a primary and secondary school launched in 1940.
Jones graduated as valedictorian from the school, known as NCI, in 1958.
Bible instructors from another Church of Christ school, David Lipscomb College, taught classes at NCI. But Lipscomb refused to admit black students.
“It troubled me that I could go to … most schools that were northern, and even in the South, but I couldn’t go to Lipscomb, where I needed to go,” Jones said.
In contrast, Lambert and Mary Campbell, white church members who housed Jones between terms at NCI, treated him like family. Mary Campbell taught public speaking to black preachers at NCI.
“I remember meeting (Mary Campbell) downtown, anywhere, she’d just grab you and hug you, and that was just unheard of back in the 1950s and ’60s,” Jones said.
He also remembered Mary Campbell telling him, “Don’t let the ignorance of a few people stop you from learning what you need to know.”
“Learn all you can,” she urged him, “use your mind well, stay out of trouble, and you’ll have plenty of time to fix things.”
CHANGING THE CHURCH’S IMAGE

Jones took the advice.
Graduating from Tennessee State University in 1963 with a bachelor’s degree in psychology and English, he earned a master’s in guidance and counseling in 1967. He completed a doctorate in education at Vanderbilt University in 1981.
While preaching, Jones worked in Nashville public schools for more than 30 years, rising to the rank of assistant superintendent.
In 1962, the Jefferson Street church invited him to serve as assistant minister as the congregation’s elderly preacher transitioned out. Jones and his wife, Carolyne, lived in an apartment above the auditorium.
On Sundays, Mrs. Jones put a roast in the oven to cook while her husband preached.
“The only problem was that the aroma would seep into the church auditorium and make everyone hungry,” recalled Carolyne Jones, now an archivist for the church. The Joneses celebrate their 50th wedding anniversary next year.
When plans for constructing Interstate 40 through Nashville called for the congregation to relocate, Jones honed his vision for the church. While some members wanted the congregation to move to a more affluent part of town, Jones preferred to stay in the area, home to historically black schools including Tennessee State, Fisk University and Meharry Medical College.
“I wanted to change the basic image of what the church could be,” Jones remembered. “I wanted the church to really be … the biblical model of an active, life-changing church.”
In 1968 — a year marked by the death of civil rights crusader Martin Luther King Jr. and racially charged riots across the nation — the church inaugurated its new building on Schrader Lane by hosting a “Race Relations Workshop.”
As historian Richard Hughes noted in “Reviving the Ancient Faith: The Story of Churches of Christ in America,” the workshop was one of three key meetings of church leaders in the 1960s to deal with racism.
SERVING SOULS, YOUNG AND OLD

In 1972, the church opened a childcare center, initially overseen by Carolyne  Jones. Forty years later, only about 6 percent of the center’s students — ages 3 to kindergarten — are from Schrader Lane families, said Shirlee G. McClesky, program’s current director.
The church’s service to the community through the center has drawn new people to the church, McClesky added.
In the 1980s, a rash of muggings and break-ins plagued the neighborhoods near Schrader Lane. Frightened widows asked the church for prayers.
The church prayed — and constructed the Schrader Acres Senior Citizens Center on its campus in 1985 to support and protect the elderly.
Jones originally planned to seek government funding for the center but changed his mind, convinced Schrader Lane could rise to the challenge.
“I don’t want to get the government to do it. I want us to do it,” he said.
In 2004, the church built the Schrader Acres Assisted Living Center. Members dug deep and paid off the loan for the $4.5 million facility in four-and-a-half years with no federal help.
Schrader Lane elder Anthony Etheridge credits Jones with foreseeing the positive impact Schrader Lane’s facilities would have on both the congregation and community.
“He’s been able to see way down the road,” Etheridge said.
Jack Evans, a longtime friend of Jones, called the preacher’s five decades of ministry “miraculous.”
From a handful of souls, Schrader Lane has become one of the largest predominantly black churches in the nation, said Evans, president of Southwestern Christian College in Terrell, Texas, a historically black college associated with Churches of Christ.
“And he has not only preached the Gospel,” Evans said, “but he has demonstrated what it means to live the Gospel.”