Olan Hicks didn't mince words about his role as The Christian Chronicle's first editor, a task he saw as necessary 'for stirring up missionary enthusiasm.'

‘Greetings to the readers of the first issue of Christian Chronicle. I am happy to assume the job of editor and publisher of the paper you now hold in your hand. Not that it is an easy task, by any means, for it is one of the most arduous and thankless tasks in all the world.” 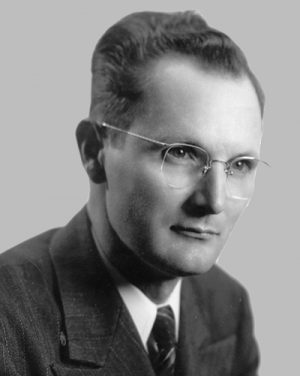 Those brutally honest words from Olan Hicks graced the front page of the Chronicle’s first issue 75 years ago. But the paper’s founder and first editor quickly added that “I am happy to tackle the job because I think it is the best means available today for stirring up missionary enthusiasm in the church.”

Hicks devoted much of his first front-page columns to introducing “the fine group of Christian men and women who have rallied to my side to help me.”

Among them was John F. Wolfe of El Paso, Texas, a veteran missionary to Mexico who “will give you each week a well-written column on the status of things religious among Latin-American peoples,” Hicks wrote. Homer Hailey, a Bible teacher at Abilene Christian College in Texas and minister for the Highland Church of Christ, agreed to help write editorials. Other early staffers included Hugo McCord, Jim Taggart and Paul Southern, who taught Bible and English at Abilene Christian.

“He was the one who gave me my first lessons in journalism,” Hicks wrote. “If the job is poorly done, now you will know who to blame!”

Though he had training in journalism, “I am not a professional promoter,” Hicks wrote in his second column, dated June 9, 1943. If the paper succeeds, “it will be because it has the merit to succeed.

He then offered a sort of mission statement for the publication:

“CHRISTIAN CHRONICLE is to be built on character. It means to stand for right and truth, for fairness and impartiality, for zeal according to knowledge. It is a newspaper and is to be conducted on the principles of news reporting. We mean to maintain not only the highest ethics of the newspaper profession, but also of Christianity.”