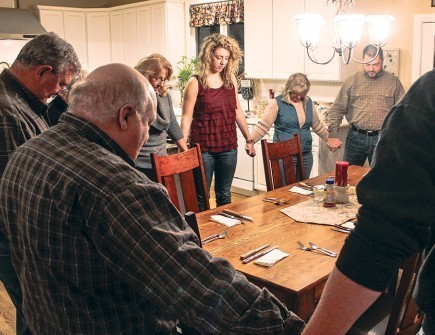 A suburban Denver congregation mixes young and old as it endeavors to share the love of Christ with its community.

Bobby Ross Jr.
WESTMINSTER, Colo. — On the first and third Sunday nights of each month, the Northwest Church of Christ assembles at the church building to sing, pray and hear a sermon.

On the second and fourth Sunday nights, members gather in each other’s homes for small-group Bible studies and devotionals.
Fifth Sunday nights are reserved for service projects.
The hybrid approach reflects the suburban Denver church’s effort to serve an intergenerational membership that runs the gamut from 20-something professionals to World War II veterans.
“It’s always been a very high priority for this eldership to not sacrifice one generation for the preferences of another,” said Ron Hanegan, one of the church’s five elders.
While one generation might favor a traditional service every Sunday night, a different generation might prefer home Bible studies each week, Northwest’s elders said.
The elders told The Christian Chronicle they strive to care for the needs of the entire congregation — and to make any change in an incremental way.
“We are cognizant that ‘shock and awe’ is not a New Testament concept,” elder John Rakestraw said. “We do try to do things gently and respectfully. A lot of it is, we are all somewhere in our walk with Christ, so let’s accept where we’re at today and grow together, because we all can’t see the world the same way.”
The Northwest church was formed with the 1982 merger of the Broomfield and 81st Avenue congregations.
The church shares its facilities with Hyland Christian School, a K-12 academy overseen by an independent board.
About 35 Spanish-speaking Christians worship each Sunday in the church’s gymnasium.
“We are one congregation in two languages,” elder Jim Bailey said.
The snow-drenched Rocky Mountains provide a picturesque backdrop for the 350-member church, described by minister Sam Pace as “traditional in worship, conservative in doctrine and progressive in methodology.”
“We loved it before we had kids, and we love it now,” said Abbie Griffith, wife of deacon Jarud Griffith and mother of Luke, 5; Eli, 3; and Titus, 1. “They are so supportive of young families and all the inconveniences that we cause.
“We’re noisy and loud … and they’re so warm and welcoming,” she said of the church. “They want the children in there.”
A weekly Wednesday night fellowship meal and a monthly parent-teen devotional help foster positive relationships among all age groups, members and leaders said.
Edie Carlton, a 69-year-old widow, remembers visiting the church for the first time with her late husband.

“We were met at the door by a teenage boy,” Carlton said. “That impressed my husband so much.
“We have a lot of older people. We have lots and lots of babies,” she said, describing what she likes about Northwest. “And then, of course, we have quite a bit in between.”
FINDING NEW WAYS TO REACH NEIGHBORS
Members and leaders alike portray a friendly congregation with a family-like atmosphere that’s trying new approaches to connect — and share the love of Christ — with this growing community of 106,000 souls.
Northwest always has been a congregation where a Church of Christ member moving to the Denver metro area would feel comfortable and welcomed, deacon Mark Phillips said.
“But over the years, when we’ve kind of self-assessed, I heard multiple times that we need to be better at outreach,” said Phillips, husband of Nicole Phillips and father of Lincoln, 5, and Cora, 3. “I think we are making progress at that.”
Church leaders have embraced a variety of “transitional ministries” designed to serve local residents at turning points in their lives — such as DivorceCare, GriefCare, Financial Peace University, Dynamic Marriage and Love and Logic.
“We’re more open to activities like these that have a religious foundation that aren’t about religious teaching necessarily,” said Mark Phillips, a Northwest member for 15 years. “They’re about serving people’s emotional and spiritual and physical needs, and then hopefully, that gives us an opportunity to say, ‘Hey, why don’t you join us for church on Sunday?’”
Northwest’s roadside electronic sign — impossible to miss along one of Westminster’s main corridors — advertises the community-focused programs.
“It’s about finding the best means to bring the truth of the Bible to people where they are now,” said Jacquee Wilson, wife of deacon Donald Wilson and mother of Jasmine, 4.
‘SEAT-OF-THE-PANTS’ MINISTRY
Mike and Linda Bowers moved to the Westminster area about five years ago to be close to their grandchildren.
In California, they had attended what they characterized as an extremely progressive Church of Christ — and they liked it. When they visited Northwest, it impressed them as a “pretty conservative, traditional church,” Mike Bowers said.
They surprised themselves by placing membership anyway.
“For me, the biggest thing was that they had a great mix,” Mike Bowers said, referring to the congregation’s age range. “That period between class and services was just alive here. You just had a good feeling about it, and we both liked that they were keeping their young families, and there were little kids running all over the place.”
The couple also liked that Northwest members seemed to serve and respond to needs — be it a young family unable to afford groceries or someone with a broken transmission — without requiring a formal ministry to act.
“I’m on the moving crew,” Mike Bowers said. “You won’t see it listed anywhere, but all of us that are on it know. … It’s kind of seat-of-the-pants ministry, but it works.”
Virgil and LaNae West, parents of two grown sons, said they were accustomed to churches that “had programs for every little thing.”
“Here, people just serve,” said LaNae West, a teacher at Hyland Christian School. “There are all kinds of people here who just find ways to reach out to people on their own without having to be a part of a group.
“There’s a real servant heart here,” she added.
A SERVANT HEART FOR EVERYONE
Now the challenge — as Northwest’s minister and elders see it — is to acquaint outsiders with that servant heart.
A recent outreach effort, dubbed a “garage giveaway,” involved filling the church gymnasium with items such as furniture, appliances, computers, televisions and clothes.
“People donated all these things, and we had pretty near 300 people from our community come in and receive those items,” said Pace, who has emphasized local outreach in his two years as Northwest’s preacher. “They were quite grateful for that.”
Northwest supports foreign missionaries in countries such as Mexico and Argentina.
In April, a group of members and leaders traveled to Haiti to work with Christian orphanages.
But this summer, the congregation plans a different kind of mission trip.
“It’s called Mission Possible,” Pace said. “We’re going to go out and take a similar amount of money that we would spend on a mission to another country and do good works in our neighborhood.
“It’s a way,” he added, “that we’re trying to move outside of the boundaries of our building and our property and out into our community to make some kind of impact.”