Founding director urges churches to speak out against ‘situations that carry the foul scent of racial injustice.’

ABILENE, Texas — In 1960, a professor named Carl Spain delivered an explosive Bible Lectureship sermon that reverberated far beyond what was known then as Abilene Christian College.

In stark terms, Spain called out the racism of Abilene Christian and other colleges associated with Churches of Christ nationally that maintained whites-only admissions policies. 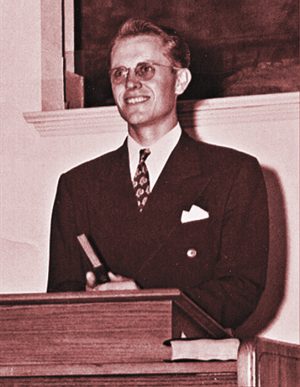 Carl Spain, shown in his younger days, was a Bible professor who delivered an explosive sermon on racial discrimination at Abilene Christian’s 1960 Bible Lectureship.

“God forbid that Churches of Christ and schools operated by Christians shall be the last stronghold of refuge for socially sick people who have Nazi illusions about the master race,” declared Spain, who taught Bible at Abilene Christian as well as serving as the minister for the Hillcrest Church of Christ in this West Texas city.

“Our moral attitudes are so mixed up that we use the story of Philemon and Onesimus to justify refusing a Negro admission to study Bible in our graduate school of Bible,” the professor complained, later asking, “Why are we afraid? … Are we moral cowards on this issue?”

Nearly six decades after Spain’s stinging rebuke hastened the integration of what is now Abilene Christian University, another Bible professor — this one an African-American named Jerry Taylor — stepped to the same wooden podium.

Taylor spoke during ACU’s recent 112th annual Bible lecture series — now called Summit — as the university marked the opening of the Carl Spain Center on Race Studies and Spiritual Action, which will conduct academic research on historical and contemporary racism in the church and Christian institutions.

The center’s name honors the legacy of Spain, who faced “social rejection, religious ostracism, tribal rage and racial retribution” as a result of his Feb. 24, 1960, address, Taylor told thousands of students and guests who filled ACU’s Moody Coliseum.

Spain, who died in 1990 at age 73, called white supremacy the most credible threat to Christian morals, noted Taylor, the center’s founding director.

“While white American Christianity vehemently condemned Soviet communism as anti-democratic, Spain rightly pointed out that these same Christians were hypocritically excluding, denying and obstructing African-Americans from having full participation in the highly esteemed system of American democracy,” Taylor said to an audience that included the late namesake’s daughter Claudette Rogers and grandson Gavin Rogers.

“I, therefore, stand today behind the same pulpit 58 years later,” he added, “to declare that the doctrine of white supremacy still continues to remain a credible threat in America to Christian morals.”

God Imagines Our Future: Being Filled With the Spirit – Jerry Taylor

Jerry Taylor delivers his keynote address "God Imagines Our Future: Being Filled With the Spirit" Tuesday at 11 a.m. in Moody Coliseum for ACU Summit 2018. Our journey to follow Jesus transforms us into a people of holiness. Jerry proclaims how the Spirit within us seasons our conversations, rewrites our heart’s melodies, inspires our thanksgivings, and enables our submissive service.

Equal in the sight of God

Taylor, 57, wasn’t born until a year after Spain’s historic sermon.

However, he experienced racism firsthand growing up in a rural area north of Memphis, Tenn. 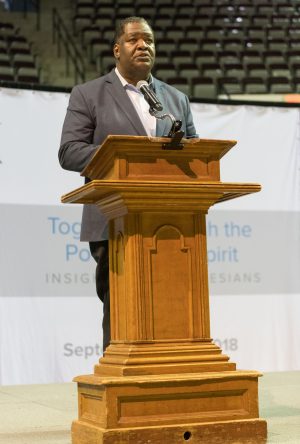 At times, Taylor’s family lacked transportation, so they’d walk to a nearby town. Sometimes, carloads full of white people would drive by and holler at them.

“They would shout at us, and we would have to jump out of the road and get in the ditch to keep from being hit,” Taylor said.

In second grade, Taylor had a white friend named Mike. But one day, the boy said he couldn’t play with Taylor anymore because he was black. Especially hurtful: The boy’s father had used the N-word in telling his son to stay away from Taylor.

Taylor was 7 years old when he heard his mother, Alma Hines, scream loudly in a nearby room.

“I knew they were going to kill him,” Hines kept saying as she watched news of the April 4, 1968, assassination of civil rights leader Martin Luther King Jr. on the balcony of the Lorraine Motel in nearby Memphis.

Taylor was baptized at age 12 at the Hatchie Church of Christ in Covington, Tenn., which his grandfather helped build. He started leading singing at age 13. He gave his first sermon at age 14, and when his ninth-grade English teacher, Merill Durham, heard about it, she invited him to preach in class.

“The need for people to be racially sensitive,” Taylor said.

No race is more special than another, he told his classmates.

“We are all equal in the sight of God,” he stressed. 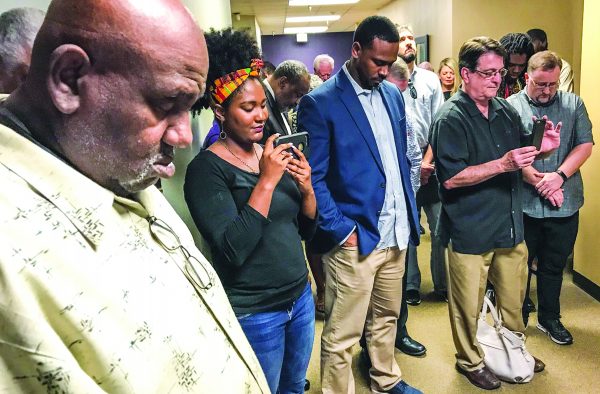 Alisha Taylor, second from left, joins other attendees at a ribbon cutting for the Carl Spain Center on Race Studies and Spiritual Action at Abilene Christian University in Texas. Taylor is an ACU graduate and the daughter of Jerry Taylor, the center’s founding director.

After high school, Taylor earned a bachelor’s degree from Southwestern Christian College in Terrell, Texas, the only historically black college associated with Churches of Christ.

Later, he completed M.Div. and D.Min. degrees at Southern Methodist University in Dallas. He preached for congregations in Texas, North Carolina and Georgia before joining the faculty at ACU, where for years he has focused on racial unity projects.

All these years later, his childhood experiences with racism still drive him. 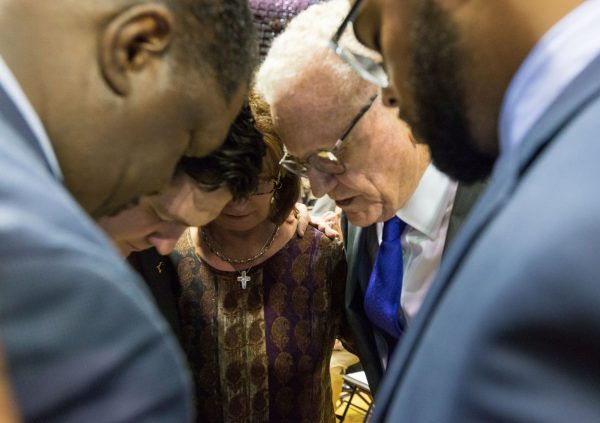 They compel him to seek reconciliation and work to bring healing to a society so often torn apart by racial division, he told The Christian Chronicle.

“We are in a period where fear and anger have been turned up to the top notch volume-wise, where people are afraid, uncertain,” Taylor said of the racial climate in America. “The trust level is very low, and those are the dynamics that go into creating an environment of hostility to where people stop exerting any energy to even talk to each other, to try to resolve problems in peaceful ways.” 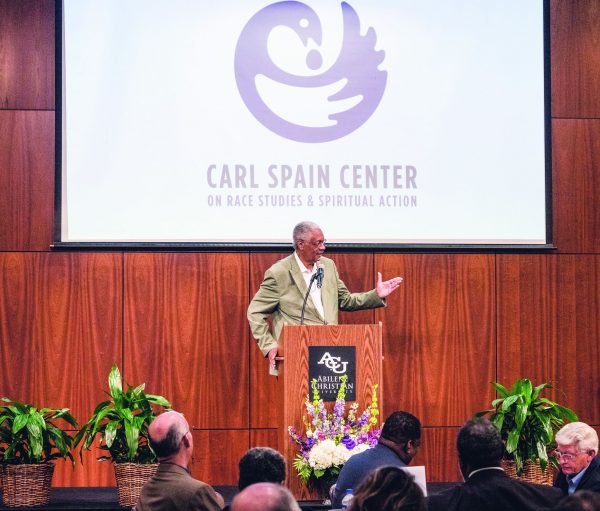 Weeks before Spain spoke in 1960, a black student named Floyd Rose was denied admission to Abilene Christian on racial grounds.

Even before Spain’s address, the college had appointed an integration committee to study the race issue and make recommendations to its board.

But the process might have taken years if not for the impetus fueled by Spain’s “theological attack on racial segregation,” according to research by Doug Foster, director of ACU’s Center for Restoration Studies.

“I know that history was made when he made that speech,” said Billy Curl, an ACU graduate who was one of the first black students admitted as a full-time undergraduate in 1962.

Curl, an elder and retired minister of the Crenshaw Church of Christ in Los Angeles, serves on ACU’s board of trustees. He reflected on Spain’s legacy at an opening luncheon for the new center.

“I don’t know whether Carl Spain got on his knees or not, but I do know he prayed,” said Curl, who recalled learning the value of prayer while growing up as the son of an East Texas sharecropper. “And when you get on your knees and pray, something is going to happen.”

On the same day as the center’s ribbon cutting, Alisha Taylor — a 2017 ACU graduate and Jerry Taylor’s daughter — performed a two-person play called “The Mountaintop” with fellow alumnus Vincson Green.

The drama depicts the last night of Martin Luther King Jr.’s life, which is more vivid to Alisha Taylor because of visits she and her father have made to historic sites in Memphis.

Asked about her father’s passion for racial unity, the 23-year-old Taylor said: “I think it just goes back to Jesus Christ and his mission of wanting to create a space where love is the most important thing. Everything that my dad does is based out of love for others and for God and Jesus.” 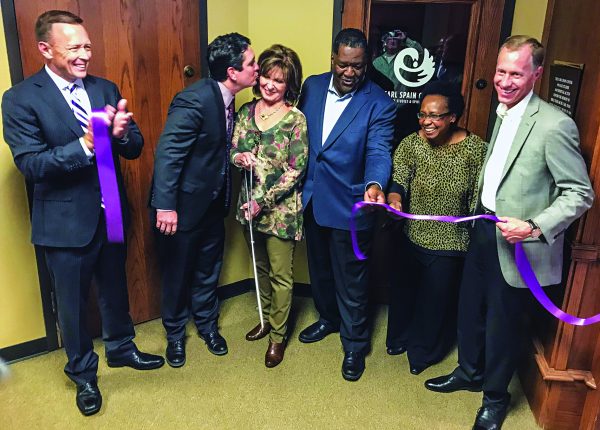 ACU’s enrollment this semester tops 5,200 students — 36 percent of them non-white.

Despite progress on racial matters, much work remains to be done, Jerry Taylor said at the center’s opening.

“When senseless shootings happen, like the recent one in Dallas that took the life of our dearly departed brother Botham Jean, we as Christians must not remain silent and confuse good for evil and evil for good,” Taylor said.

He cited other examples that he said demand a response from Christians, such as contaminated drinking water in majority-black Flint, Mich., and white nationalist rallies in places such as Charlottesville, Va.

“We may not always know what to do immediately when these terrible events happen,” Taylor said. “But as the church of Jesus Christ, we can ask God to give us the courage to speak redeeming words into situations that carry the foul scent of racial injustice.”

“We can ask God to give us the courage to speak redeeming words into situations that carry the foul scent of racial injustice.”