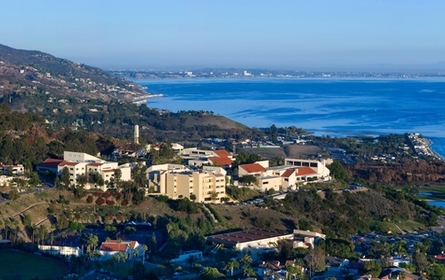 Once again, a Pepperdine administrator named to a university presidency

Is it something in the (beautiful ocean) water in Malibu, Calif.?
Once again, a Pepperdine University administrator has been hired as a university president, this time at Lubbock Christian in Texas.

The Pepperdine campus. (Photo via www.pepperdine.edu)

Tim Perrin, vice dean and professor of law at Pepperdine University School of Law, was introduced last week as president-elect of his Texas alma matter.
He joins a handful of other former employees of Pepperdine, which is associated with Churches of Christ, who serve as university presidents nationwide.
Among them: Southern Methodist University’s Gerald R. Turner, the University of Georgia’s Michael F. Adams, Baylor University’s Kenneth Starr, Lipscomb University’s Randy Lowry and Oklahoma Christian University’s Mike O’Neal (O’Neal is retiring at the end of this academic year).
“Even though we will miss Tim, it is a source of pride that not only our sister institutions but institutions across the country look to Pepperdine University as they seek dynamic and values centered leaders in their presidential searches,” Andrew Benton, Pepperdine’s president since 2000, said in a statement to The Christian Chronicle.
“On the other hand, if this keeps up, I may consider charging a head hunters fee in the future,” Benton said.

Pepperdine works hard to recruit high performers who share its vision and values, then provides opportunities for promising leaders to develop skills and experience across the university, said Rick Gibson, vice president for public affairs and church relations.”Pepperdine has become a nationally ranked university while remaining true to its Christian mission, all while competing in a highly challenging environment,” Gibson said. “As other universities seek to do the same, under similar circumstances, they are looking for proven leadership.”(For the record, other Christian universities besides Pepperdine have influenced the presidents mentioned: Turner has degrees from Lubbock Christian and Abilene Christian University. Adams is a Lipscomb graduate. Starr began his undergraduate studies at Harding University. Lowry served briefly on ACU’s board of trustees before his appointment as Lipscomb president. O’Neal attended Oklahoma Christian and Harding and served on the Harding faculty. Benton himself is an Oklahoma Christian graduate.)