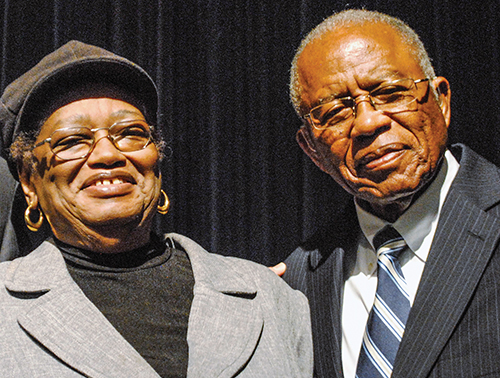 On Ferguson, faith and the fight for equality

Lynn McMillon
President Emeritus
“As a nation and a people, we must continue to lay down the burden of race,” says civil rights attorney, preacher and church elder Fred Gray. “We must continue our efforts to tear down all barriers which keep us from our full potential as human beings.”

For Gray, 84, the ongoing struggle for equality is deeply personal. Born in segregated Montgomery, his father died when he was a toddler. His mother believed in the power of education and sent him to Nashville Christian Institute, a boarding school in Tennessee.

In 1960, he argued before the U.S. Supreme Court in Gomillion v. Lightfoot about the unconstitutionality of Tuskegee, Ala., rezoning laws that would have kept black citizens from having a voice in elections. In 1975, he filed suit on behalf of survivors of the Tuskegee syphilis experiment of the 1930s. His clients received compensation and proper health care.

We still have a long way to go. If you want to know where there is a lack of diversity, look at your home. Look in your church. Look in your place of employment.  Look at the persons with whom you associate on a day-to-day basis. And if all the persons you deal with on a day to day basis look just like you, you may have a lack of diversity.
Considering the protests and violence in Ferguson, Mo., New York, Baltimore, how can law enforcement and citizens trust each other?

It was far greater than just the individual, and that’s why my whole idea wasn’t just to do something for Fred Gray. It was to try to change conditions that I saw as they existed when I was an upper teenager.

I think that, with a lot of help along the way, we’ve been able to help to change some of that.
Do you think we may be at the beginning of a new stage of the civil rights movement?

The nation needs to look at these disparities. While all of them are not the result of race, many of them are byproducts of race, and we need to work on solving those problems.
What are your thoughts about race relations in our churches?