On Christian journalists and #blacklivesmatter

Wendell Edwards
ABILENE, Texas — The question hung in the air — just like one of those famous paintings that hangs on a wall in an art museum, blocked off by a rope. You dare not cross.

And in this moment, standing in front of 30-plus students at Abilene Christian University on a Friday night, no one crossed this line either.

Not a single person raised a hand to answer the question, “What is the Black Lives Matter movement?”

Inside Story | Wendell EdwardsAs a broadcast journalist in Birmingham, Ala., that question is particularly important.

Abilene Christian, my alma mater, invited me back to co-teach a short course on Race and the Media with Farron Salley, also an ACU alum and an award-winning television reporter in Tulsa, Okla.

We wanted to know what this group of college students — millennials, all of them — knew about the Black Lives Matter movement and its role in media.

More importantly, we wanted to ponder, with the students, the role of Christian journalists as we cover this movement and try to make sense of it.

We all had a lot to learn.

Black Lives Matter originated shortly after the 2012 shooting death of Trayvon Martin, a black 17-year-old, by George Zimmerman, a neighborhood watch commander for a gated community in Florida.

The tensions sparked by the case escalated with the 2014 shooting death of Michael Brown in Ferguson, Mo., and grew from there. Now #blacklivesmatter is a social media tag for a movement that showcases how black lives — mostly young black men — are cut short. And when it comes to accountability — an arrest, indictment or a conviction — too many times justice seems to be denied.

As the tag started trending on social media, so did the response “all lives matter.” In the course at ACU, we determined that this is a given. People of faith should value all life. 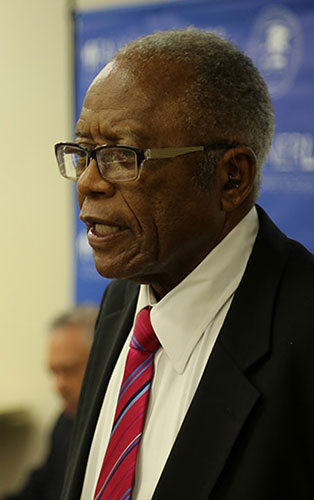 “All Lives Matter? The Constitutional Role of Race in Policing” was the topic of the recent Fred Gray Civil Rights Symposium hosted by Faulkner University’s law school in Montgomery. Ala. Gray, an attorney who defended Rosa Parks and argued in other high-profile cases of the civil right movement, is a longtime elder and minister for Churches of Christ.
“We still have serious problems with proper training of law enforcement officials, because many of these instances that have occurred,” Gray said at the symposium, referencing recent, racially charged shootings by police in states across the U.S.
Rob McFarland, an associate dean of Faulkner’s law school, said,  “The topics discussed at this symposium address directly real issues concerning our nation.”
For more on race and Churches of Christ, see Lynn McMillon’s Dialogue with Gray, “On Ferguson, faith and the fight for equality.” Also, see “The broken soul of Baltimore,” Bobby Ross Jr.’s report on Christians in the riot-torn city after the death of Freddie Gray in police custody.
The Society of Professional Journalists’ Oklahoma Pro Chapter recently honored Ross’ story from Baltimore with a first-place award for diversity coverage.

But does the Black Lives Matter movement imply that other lives don’t?

I brought up Mark Zuckerberg, founder of Facebook. In February, he scolded employees for what he called several recent instances of people crossing out “Black Lives Matter” on the famous signature walls at the company’s New York headquarters — the real-life equivalent of Facebook’s virtual walls — and writing “all lives matter” instead.

The ACU students delved into stories that continue to stir the movement. They split into teams, researched the cases, highlighted the role of the media and the Black Lives Matter movement, interviewed their peers and wrote a public relations response. They presented the results in class.

“I found this very disturbing,” said senior Daniel Block, whose group profiled the Tamir Rice case in Cleveland. He was a 12-year-old shot by a police officer who mistook Tamir’s pellet gun for the real thing. “It just seems (that) in most — if not all — of the cases no one was held responsible.”

By the end of the course, it was clear: Covering this movement and these cases requires a sense of understanding. We must recognize that everyone yearns for validation. And sometimes, when it doesn’t come through traditional avenues, people pave their own path.

Our role as Christian journalists remains the same no matter what we cover. Look for the objective, compassionate story and tell both sides fairly. We just have to make sure we understand the narrative.

I think Robert Case, director of the World Journalism Institute, said it pretty well in a speech to a group of students in 2012: “The dominant role for the journalist who is a Christian is an unrelenting striver for verifiable truth.”

Jesus said it even better.

“I came into the world to testify to the truth. Everyone on the side of truth listens to me.” (John 18:37)

Most of the students in our course didn’t understand the Black Lives Matter movement going into the weekend, said Doug Mendenhall, assistant professor and journalist in residence at ACU. With input from two Christians in broadcast media, “the students really got a chance to see how this movement helped bring a perspective to life,” he added.

The class ended on a Sunday afternoon — almost the way it started — with questions. Oprah Winfrey, on the final episode of her talk show, shared with her audience what she’s learned after 4,300 episodes and more than 30,000 interviews. The three questions people most need answered are:
“Do you see me? Do you hear me? Does what I say matter to you?”

I pray that future generations of Christians in media will understand those questions — and that they’ll be willing to quickly raise their hands and answer yes.

WENDELL EDWARDS co-anchors the morning news for WBMA, ABC 33/40 in Birmingham, Ala. He and his family attend the Riverchase Church of Christ in Birmingham.

Filed under: Inside Story Staff Reports