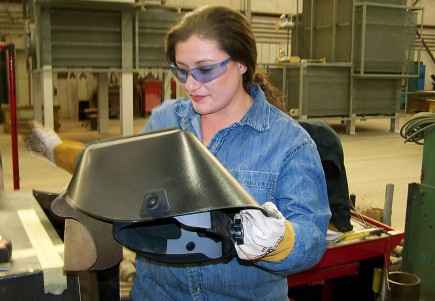 On a mission to get the church working

HAMIL R. HARRIS AND ERIK TRYGGESTAD
BALTIMORE — Souls in need of prayer fill the seats closest to the pulpit of the East Baltimore Church of Christ — as they do most Sunday mornings after minister Kevin Bethea’s sermon.
Some ask for healing for loved ones. Others come repenting of unspoken sins.
Arnesia Thomas asks the church to pray that she finds a new job.
Near the back of the auditorium, Dan Hager listens to every prayer request — especially that last one.
After the closing prayer, he hurries to find Thomas and offers to help.
For Hager, employment is ministry. An administrator at Johns Hopkins University School of Medicine, he tries to live by the words he reads in the Bible, including Colossians 3:23, “Whatever you do, work heartily, as for the Lord and not for men.”
Hager and his family began attending the East Baltimore church about a year ago. Week after week, he heard prayer requests similar to Thomas’. He saw an opportunity to help his church and his community.
Recently, he and Eric Lorick, the congregation’s Christian life minister, hosted a “Working Heartily as Unto the Lord” seminar for 10 members.
“In all honesty, it is incredibly unfair that employers are judging your potential based on a 10-second glance at your resume or a 30-minute interview,” Hager said.
To capture employers’ attention, he urged church members to “think fruit,” following Jesus’ words in Luke 6, “For every tree is known by its own fruit.”
“Don’t just tell me you were responsible for customer service. Show me the fruit — good customer satisfaction scores, employee of the month recognition or your sales performance,” he said.
Many of the 5.8 million people who live in Maryland, which nearly surrounds Washington, D.C., depend on government jobs. A recent round of politically charged budget cuts, known as sequestration, resulted in layoffs. Other sectors of the state’s economy have declined, especially the construction industry.
Despite adding 4,600 jobs in May, Maryland’s unemployment rate rose from 6.5 percent to 6.7 percent — still under the national average of 7.6 percent, the U.S. Department of Labor reported.
The increase likely means more people are looking for work. Simon Geddie is one of them. For the past 18 months, the 20-year-old has been seeking a job. Eventually, he’d like to design video games. In the meantime, he’d like to work at a video game retailer.
“It’s kind of hard to get people’s attention,” said Geddie, who attended the workshop. “No one ever told me how to perfect a resume. I learned a lot of new stuff about that.”
BIBLE-BASED WORK HABITS AND SELF-ESTEEM
Citing the Old Testament stories of Joseph and Daniel — two Israelites forced to labor under foreign kings — Hager told the participants that followers of Christ can “bless those with whom we work and cause even those who don’t share our faith to glorify God.”
Churches of Christ across the U.S. have applied Bible-based principles to ministries focused on employment, even in the years prior to the 2008 recession.
Congregations including The Hills Church of Christ in North Richland Hills, Texas, the Crieve Hall Church of Christ in Nashville, Tenn., and the Naperville Church of Christ in Illinois have programs designed to help people find jobs.
Many of these programs are born from food pantries or other programs focused on the impoverished and a demographic known as “chronically unemployed.” Nonprofits including CitySquare in Dallas and HopeWorks in Memphis, Tenn., have job-training components that evolved from the desires of Christians to help the poor.
“For many, the self-esteem is more important than knowing how to put together a nice-looking resume,” said Joyce Dalzell, a member of the Highland Church of Christ in Abilene, Texas, and director of FaithWorks of Abilene.
While working with a food pantry, Dalzell said she noticed that many of the people she served “just have never learned the skills they need to find a good job and be a good employee.”
In addition to teaching job skills, Dalzell said, FaithWorks uses biblical principles that help many students “get to know a heavenly father and their value as a person.”
WALKING — AND JOB SEARCHING — BY FAITH
Even Christians who aren’t chronically unemployed feel the pinch as the U.S. continues its sluggish recovery from the recession.
“Twenty years ago, we went to college, got a job and worked our way up in a corporation,” said Brenda Bethea, the minister’s wife at the East Baltimore church. “Now people are losing their jobs, and they don’t know what to do.”
Arnesia Thomas, who asked the congregation for prayers in her job search, has a graduate degree from the University of Baltimore.
Oddly enough, she was a counselor for a welfare-to-work program operated by the city — someone who helped people find jobs — before budget cuts eliminated her position two weeks before Christmas. She found part-time work at a financial call center during tax season but needs something stable and full time.
Hager has helped her in her job search, she said. She’s polishing her resume and broadening her scope, listening for key words during interviews that tell her the job for which she is applying has long-term funding.
Meanwhile, “my faith walk is still good,” said Thomas, a member at East Baltimore for nine years. The church’s women are a constant source of encouragement. She’s kept busy, teaching Sunday school for the church’s children.
“Right now,” she said, “I’ve got all the extra time in the world to fully devote myself to the church.”