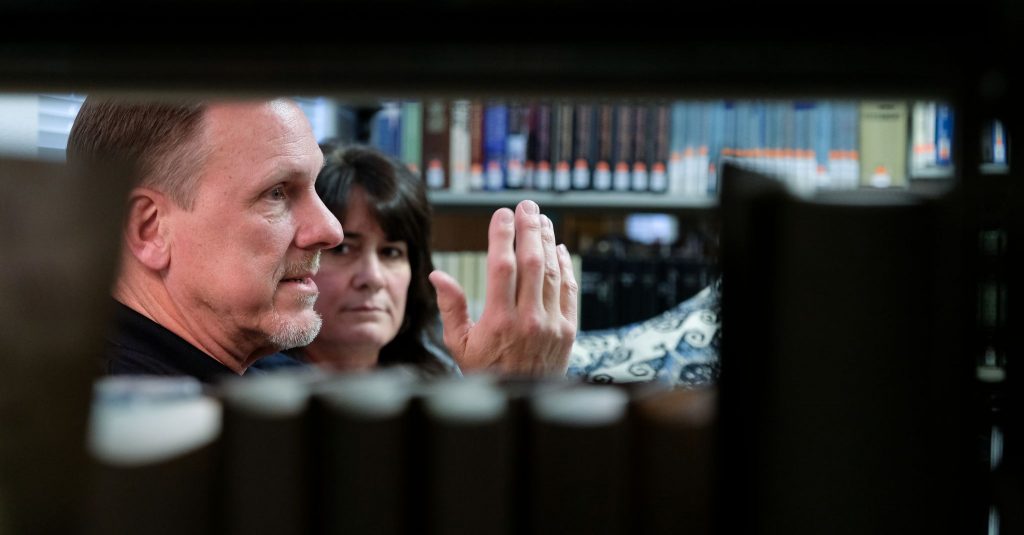 On a mission to fill empty pulpits

For John and Carla Moore, addressing the shortage of preachers in Churches of Christ is a priority.

Full-time ministry in Churches of Christ often doesn’t have the best reputation, contributing to a shortage of candidates to fill pulpit openings.

Numerous current and former preachers across the U.S. cited the negative perceptions — a mix of truth and exaggeration — in a recent Christian Chronicle survey.

Here in Colorado’s capital, John and Carla Moore began work at Bear Valley Bible Institute six years ago with a goal of reversing the trend.

“We came here to do what we love, and that is to try and train preachers and get people excited about ministry.”

“We came here to do what we love, and that is to try and train preachers and get people excited about ministry,” said John, a Bible instructor.

But the challenge is steep.

The frequent calls John receives from church leaders tell him that.

“Somebody who knows me will call and say, ‘Hey, can you help us find a preacher? We just can’t find one,’” he said. “And they go a year or two without one. … Our students don’t really have any trouble making and finding contacts for places to interview. Now, finding the right fit is another story.”

As Bear Valley’s dean of women, Carla mentors preaching students’ wives as well as those attending Bear Valley on their own.

“Some will do children’s ministry. Some will do mission work,” she said. “And some just want the knowledge, and they want to be able to stay alongside their husband while they’re studying and be able to help them in their work.” 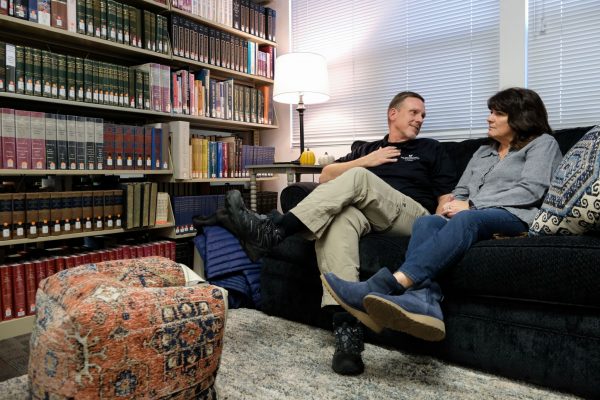 John and Carla Moore both serve on the staff of Bear Valley Bible Institute in Denver. They are pictured in the library of the preacher training school.

Why is hiring or retaining preachers so difficult?

The Moores point to a variety of factors.

“I think dealing with people is always a challenge,” John said. “I think sometimes ministers make mistakes, and sometimes the congregations maybe aren’t as patient as they should be.” 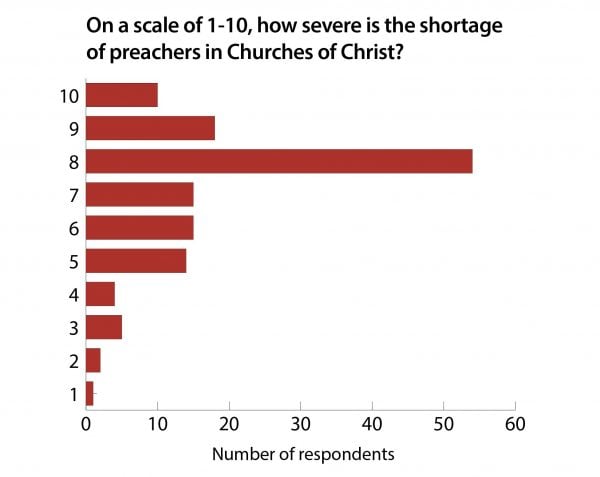 The Christian Chronicle surveyed 138 ministers across the U.S. Respondents were asked to rate the severity of the preacher shortage in Churches of Christ on a scale of 1 to 10 (1 being the least severe and 10 being the worst).

Said Carla: “I think there’s a lot of young preachers that go out, and they get discouraged really easily because they don’t have a support system or because they expect it to be something that it’s not.”

Financial concerns play a role, too, the couple said.

“Truthfully, I think some of it is just that we are much more of a materialistic society,” John said. “I feel like some of our best minds and our brightest kids are pursuing secular degrees, where they can earn more money, and I’m not saying that that’s wrong.”

“What better thing could we do,” he asked, “than to connect people to the Divine and spiritual principles and get them to know Jesus?” 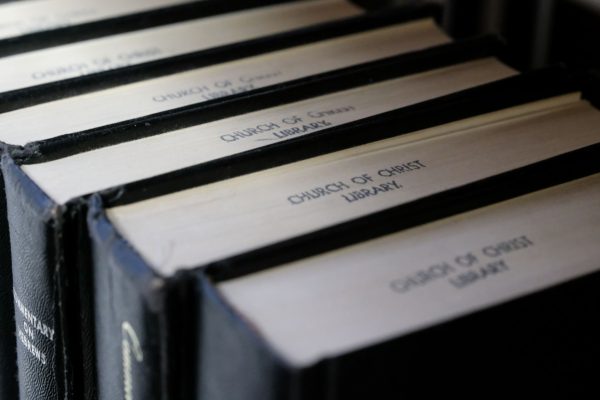 Jonah Mace Stewart, 19, is one of four friends from the North MacArthur Church of Christ in Oklahoma City enrolled at Bear Valley.

Founded in Denver in 1965, the school trains preachers at campuses around the world.

The two-year program in the Mile High City is tuition free and averages about 25 to 30 students per quarter. Some graduates go straight into full-time ministry work. Others pursue additional Bible education at a Christian university.

Stewart said he never thought about becoming a minister.

But then he attended a preacher training camp hosted by the North MacArthur church and received encouragement from the congregation’s youth minister and elders.

“Having the support network that I have makes it easier, but still, it’s late nights and early mornings and tough assignments,” Stewart, who earlier attended carpentry school, said of his studies. “But it’s all for the betterment of ourselves, and I’m loving it.”

“I don’t think it’s a secret that there is a shortage of young people pursuing ministry.”

Jeremy Roberts, North MacArthur’s youth and family minister, grew up in a ministry family in Colorado. He and his wife, Carrie, are 2012 Bear Valley graduates.

“I don’t think it’s a secret that there is a shortage of young people pursuing ministry,” Roberts said. “North Mac is trying to help combat that problem through some leadership training and opportunities like our preacher training camp we host every summer.

“Most importantly, though, I think it’s important to inspire these young people by example,” he added. “I want them to see how much I love my ministry and how blessed I am to be doing this over anything else.” 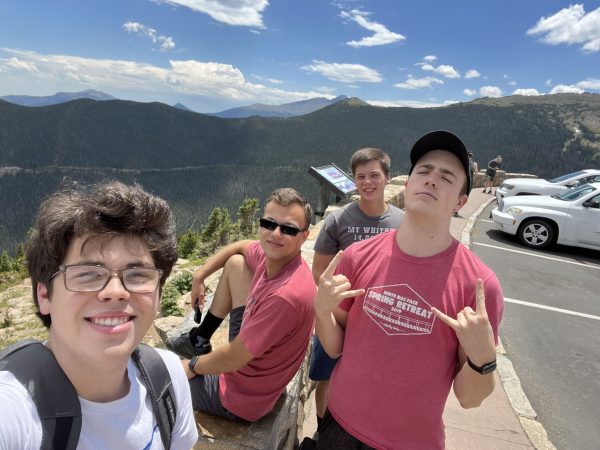 ‘In the thick of it’

Nate Miller, a 2019 Bear Valley graduate, grew up in the Central Church of Christ in Moore, Okla.

In high school, Miller, now 23, considered joining the military. But a preacher training camp at the Lewisville Church of Christ in Texas changed his plans.

“I really just loved everything about preaching,” he said. “After that first sermon I preached, I was hooked.” 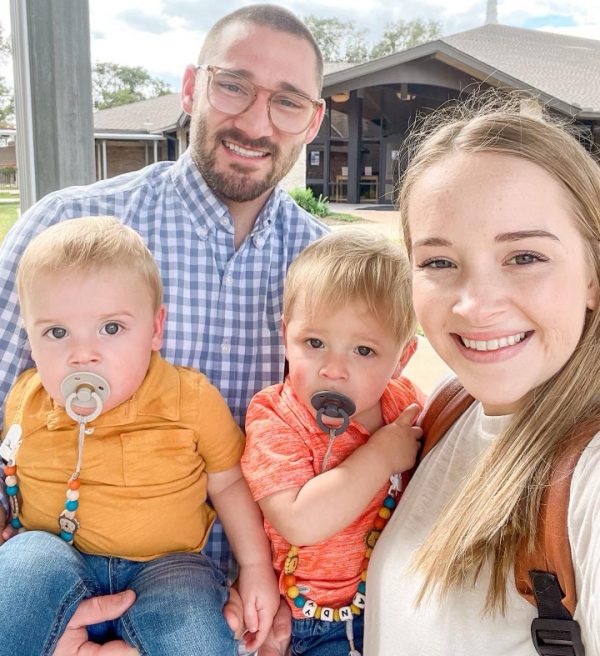 Nate and Katie Miller, domestic missionaries in South Dakota, with their sons, Sam and Andy. The boys are almost 2 years old.

He and his wife, Katie, serve as domestic missionaries with the Wisconsin Avenue Church of Christ in Huron, S.D., which had only four members when the couple arrived in 2020.

“They were getting ready to shut their doors,” Miller said.

But now the South Dakota congregation’s attendance hits 25 on a good Sunday.

“I’m a high-energy person, I guess. And my view of preaching was, you sat and studied and preached, and that was it. And that could not be farther from the truth.”

Ministry isn’t what Miller envisioned as a teen.

“I’m a high-energy person, I guess,” he said. “And my view of preaching was, you sat and studied and preached, and that was it. And that could not be farther from the truth. In fact, every day in ministry is different.”

From service projects with short-term mission groups to benevolence outreach aimed at meeting neighbors’ physical and spiritual needs, the Lord’s work frequently takes him into the community.

“You go to the roughest apartment complex in town, where who knows what you’re going to see,” Miller said. “We were just at a lady’s house, and she was coming off of drugs, and she’s pregnant. And she doesn’t know who the dad is. And we’re delivering her food … and she’s crying at the door.

“Those situations,” he added, “keep it far, far away from the quote, unquote ‘desk job.’ I mean, you’re in the thick of it.” 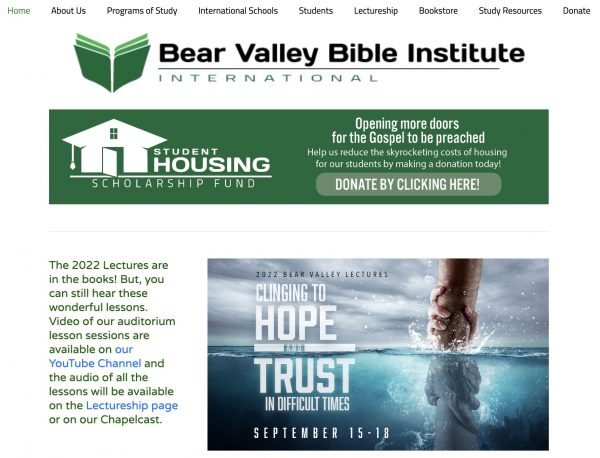 Married since 1986, John and Carla Moore spent decades in ministry in their native Texas. Now they split time between Colorado and their home state.

When not at Bear Valley, they direct Bible Land Passages — which makes documentaries about biblical locations — and teach marriage enrichment seminars.

In addition, Carla leads a Scripture handwriting ministry called “Write On My Heart Every Word” that has 4,500 followers on Facebook.

Undoubtedly, the Moores are making a positive difference, said Matt Wallin, director of promotions for House to House/Heart to Heart, a Tennessee-based evangelistic publication.

“John is someone who is encouraging people to go into ministry and building up ministers,” Wallin said. “His knowledge of history and geography, especially of Israel, makes the Bible come alive and be understood. He and Carla are also such kind, genuine people. It’s a blessing to know them.”

The Moores said they’ve heard the horror stories about ministry, but they haven’t experienced them.

“God has just opened so many doors. We have just followed where he led, and I wouldn’t change anything.”

They focus on the positive aspects of accepting God’s calling.

“Sometimes, we get kind of choked up thinking about what all has happened,” John said. “When you start in ministry, you just want to serve the Lord, and you don’t know where all that’s going to lead. And we have gotten to do some pretty awesome things and be in some wonderful places and meet people who just love the Lord.”

“God has just opened so many doors,” she said. “We have just followed where he led, and I wouldn’t change anything.” 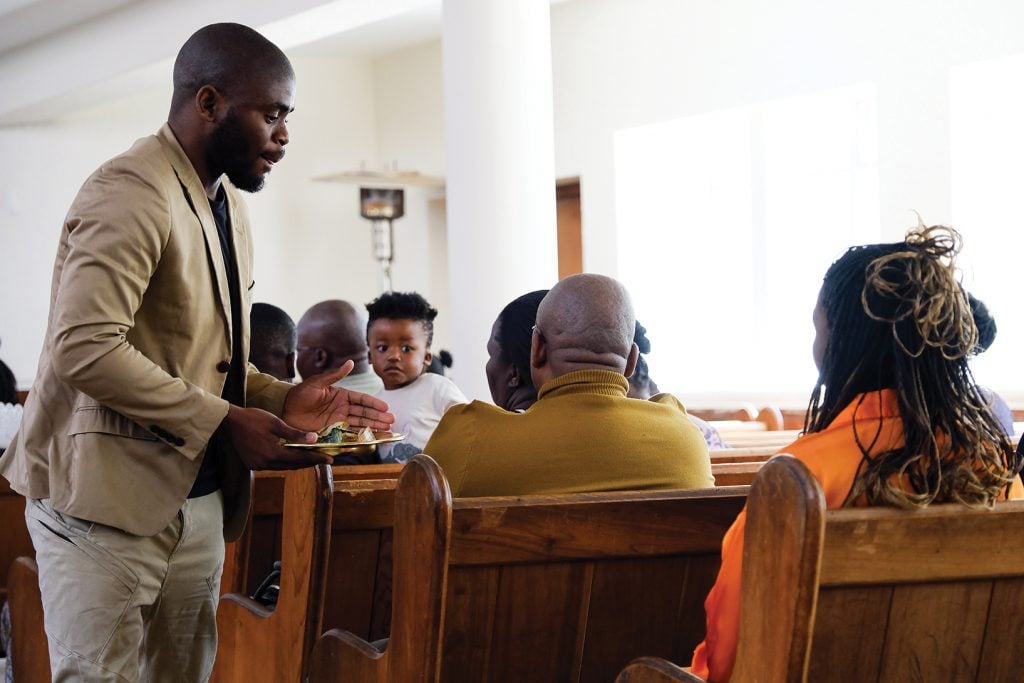 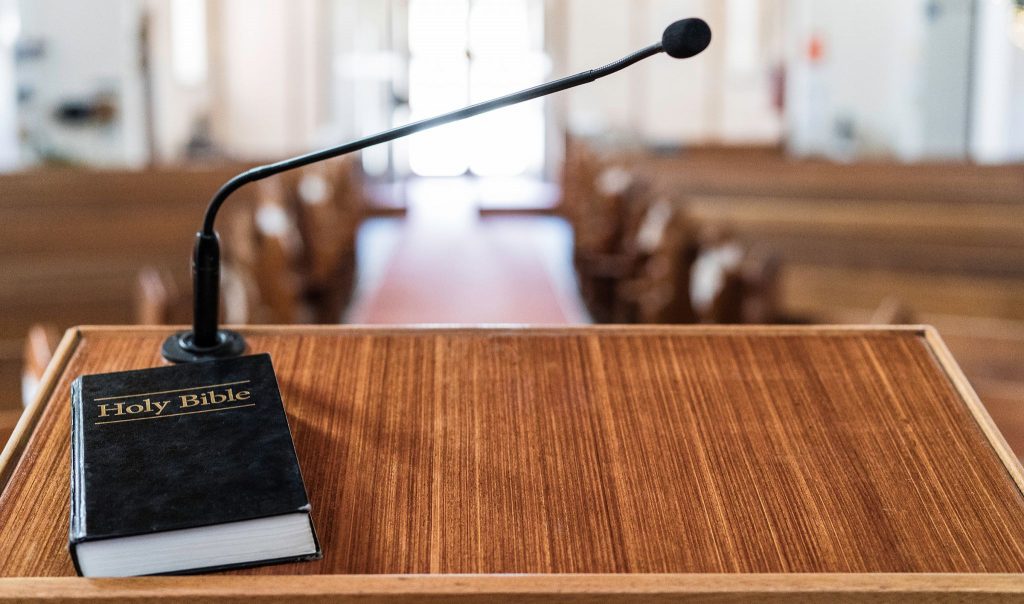 'What ideas or solutions would you propose to inspire and… 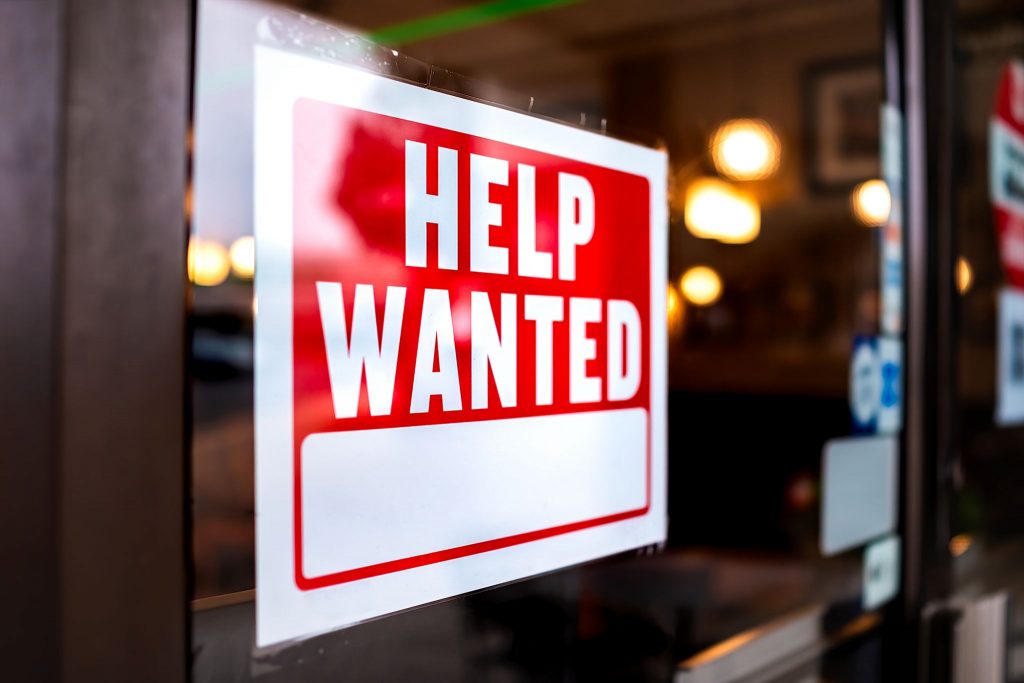 Editorial: Who’s to blame for the preacher shortage in Churches of Christ? We are

Churches of Christ don’t have enough preachers to fill all… 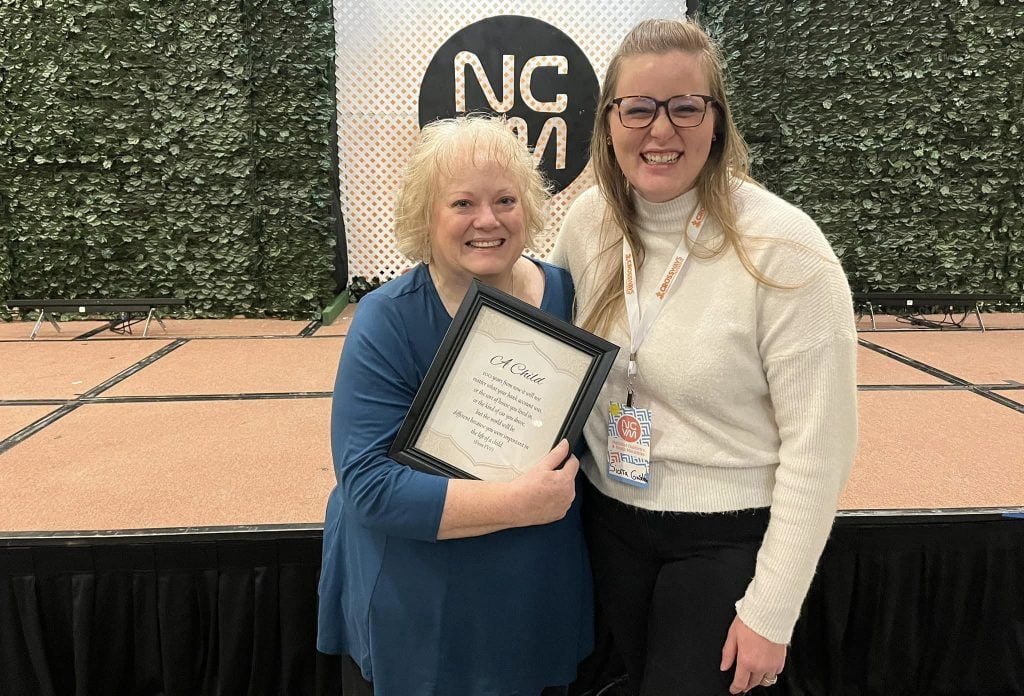 COLORADO SPRINGS, Colo. — The picture flashed on the big… 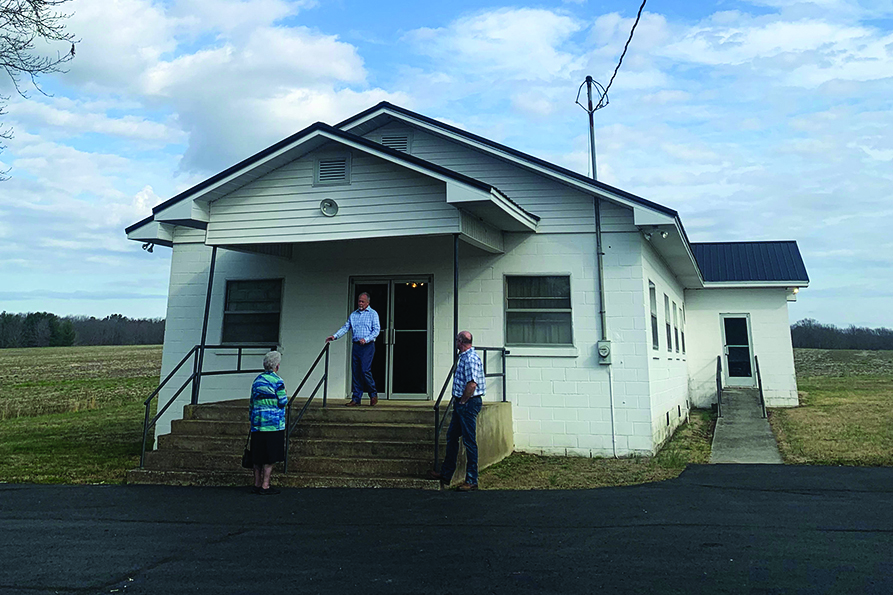