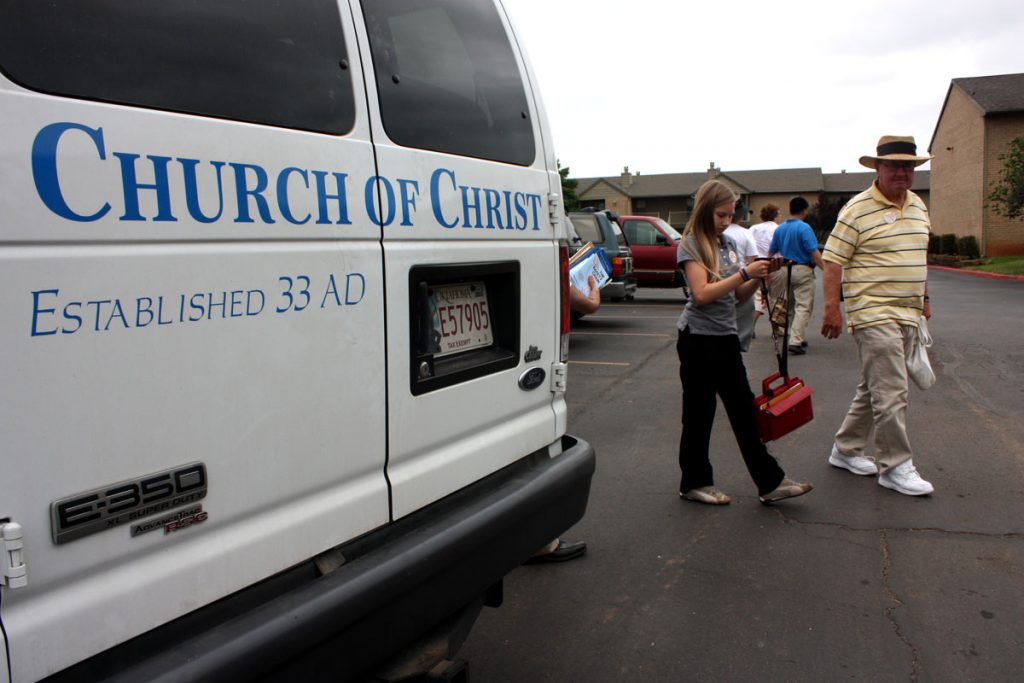 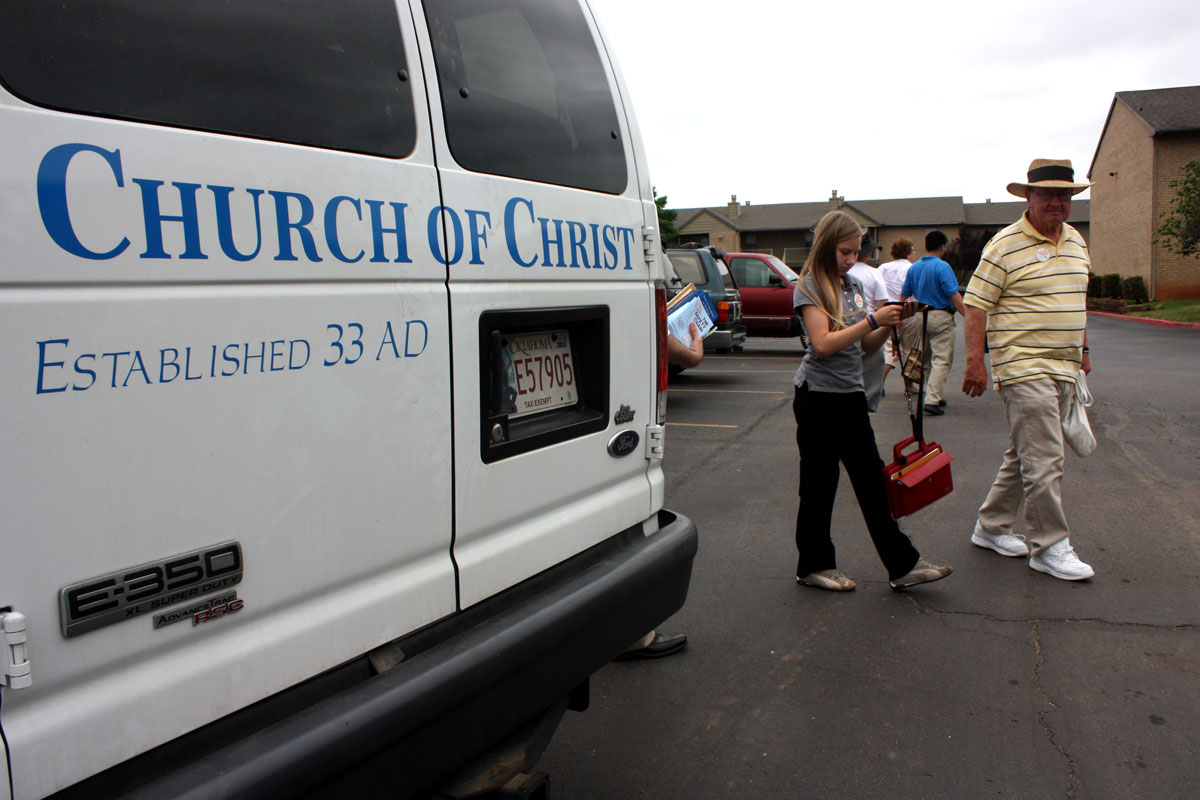 Participants in the Oklahoma City “Back to the Bible” campaign prepare to knock on doors at an apartment complex. (Photo by Erik Tryggestad)

Blogging live from Oklahoma City
I spent the afternoon watching some old-school door knocking evangelism in northwest Oklahoma City.
Well, not everything about it was old school. While groups of believers went two-by-two to spread the Gospel in an apartment complex, their team leader, Brad Vaughan, got a one-word text message — “baptism.” 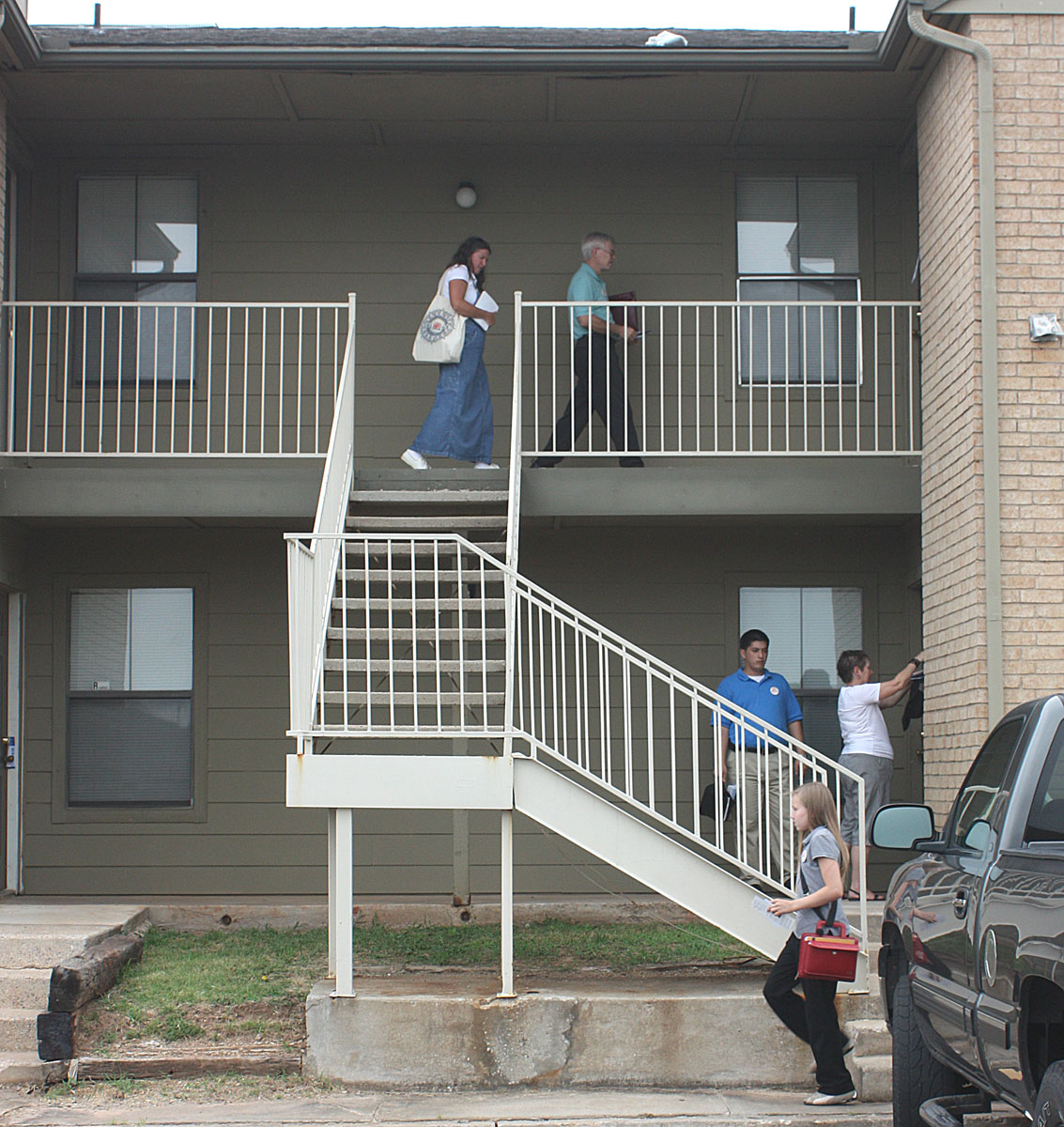 “Back to the Bible” volunteers knock on apartment doors. (Photo by Erik Tryggestad)

Vaughan, who lives in Perry, Kan., traveled to the Sooner state to help members of the Cherokee Hills Church of Christ in a weeklong “Back to the Bible” campaign. About 70 volunteers came to Oklahoma City, many of them from the Northwest Church of Christ in Lawton, Okla.
For 35 years Northwest members have traveled to another community to conduct a “Back to the Bible Campaign” at the request of a host church. Last year, Northwest partnered with other Lawton-area churches to reach out to their own city. That effort yielded 51 baptisms and one restoration, as we reported.
As of Thursday, the OKC campaign had resulted in more than 230 Bible studies. At the Cherokee Hills church building, I got to watch coordinator Dave Sexton, a member of the Northwest church, add the 20th picture of a new convert (the one he sent a text to Vaughan about) to a poster board in the lobby. 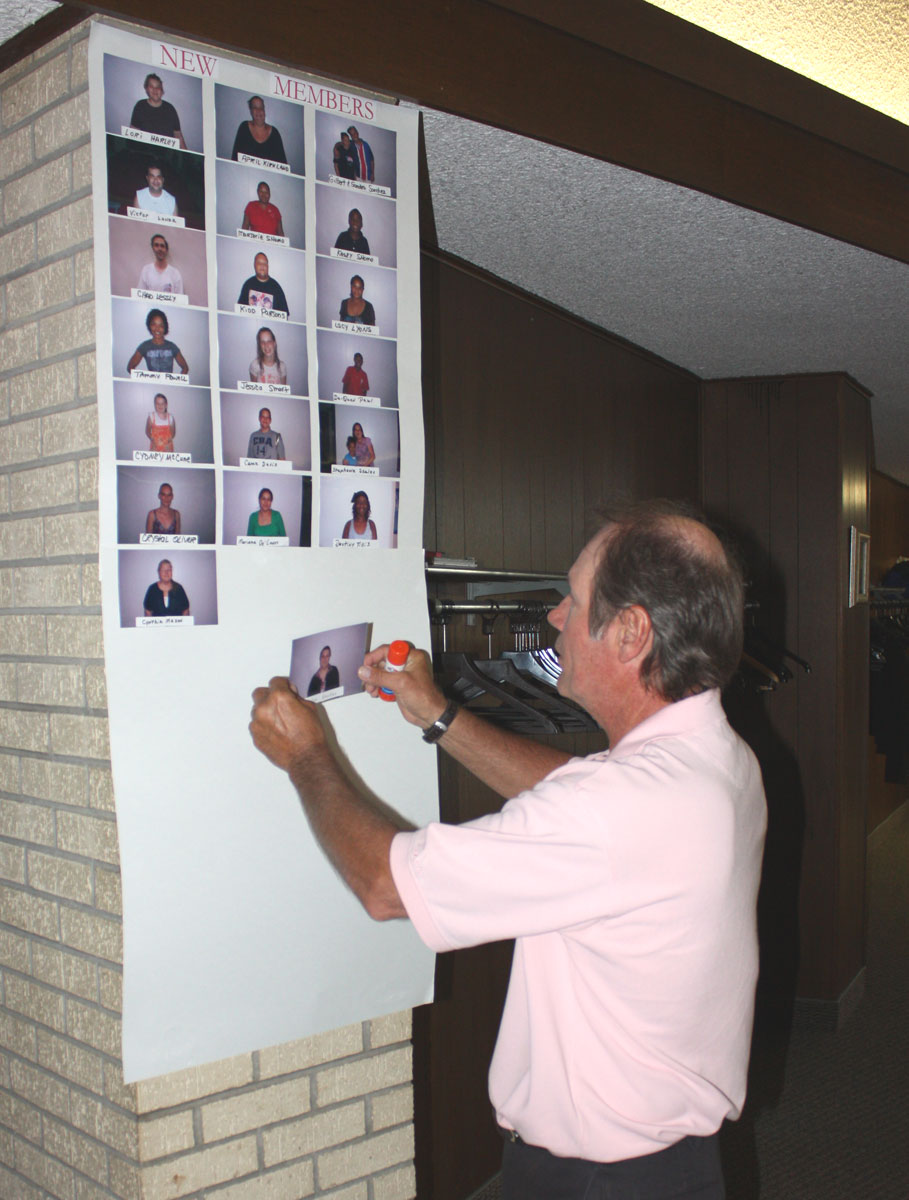 Dave Sexton adds a photo of a newly baptized believer to the wall at the Cherokee Hills church. (Photo by Erik Tryggestad)

Chad Lessly had his picture added to the board on Tuesday night. Campaigners had knocked on his door earlier that day and left him a flyer with a contact number for Bible studies. He called, they answered. Soon he was baptized.
“Romans 10:9-10 is pretty much what told me I needed to be baptized into the truth,” he said. He didn’t have to look it up.
Unfortunately, I did.

“I’m a new creature in the Lord,” Lessly added.
Edith Cliburn, 86, came all the way from Franklin, Ky., to participate in the campaign. She was at the one in Lawton last year, too. When she told me she attended the Franklin Church of Christ, she already knew what I was going to ask next — “Do you know Kenny Perry?”
“Of course,” she said. The PGA pro, who very nearly won the Masters a couple of years ago, is a deacon of the Franklin the church.
Emily Hopper, 13, also knocked doors during the campaign. She attends Cherokee Hills and told me that she had a Bible study set up for that evening. 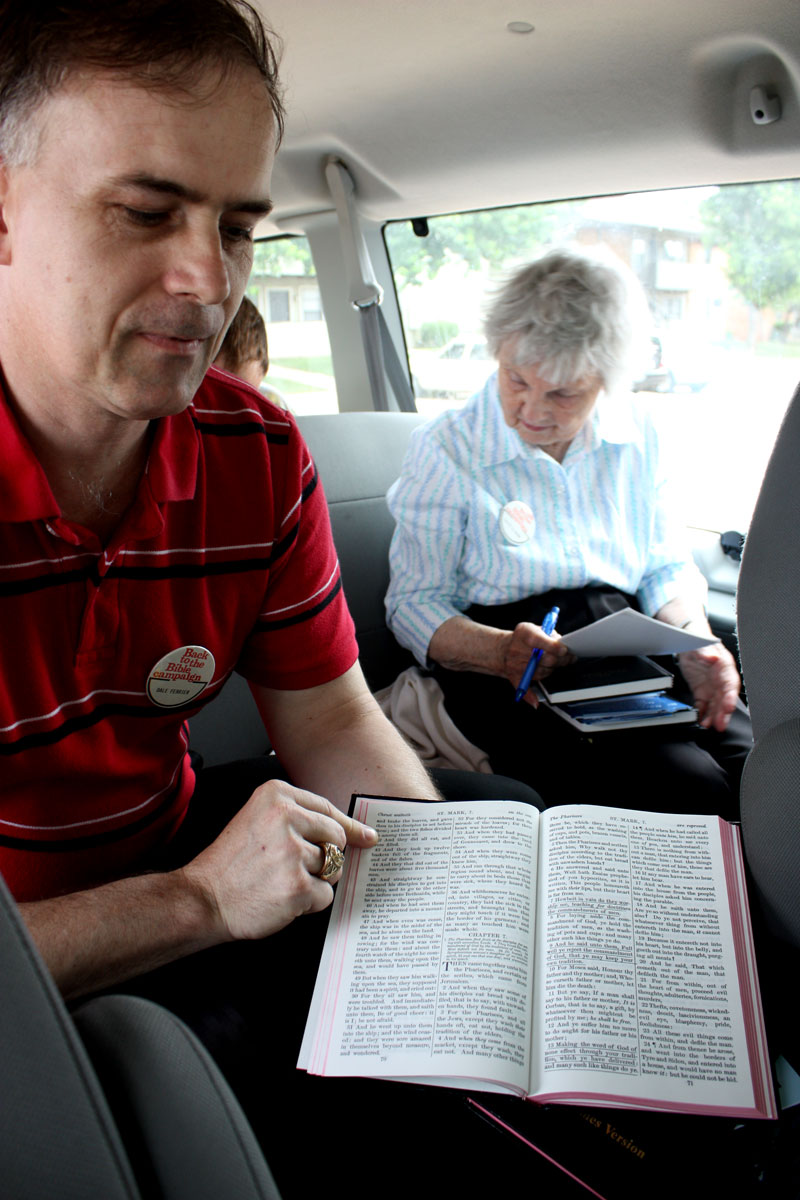 Dale Ferrier, a member of the Centerville Road Church of Christ in Garland, Texas, shows underlined Scriptures in a New Testament used in Bible studies. (Photo by Erik Tryggestad)

Sure, she’d had a few doors slammed in her face, but also a lot of positive responses, she said.
I asked her if walking up to strangers and inviting them to church made her nervous.
“Not really,” she said, “because we’re doing this for God, so there’s not really anything to be scared of.”
The “Back to the Bible” campaign concludes tomorrow. See Cherokee Hills’ website for more info.
Have you ever participated in a door-knocking campaign? What were the results? In your opinion, is this a good option for evangelism where you live?