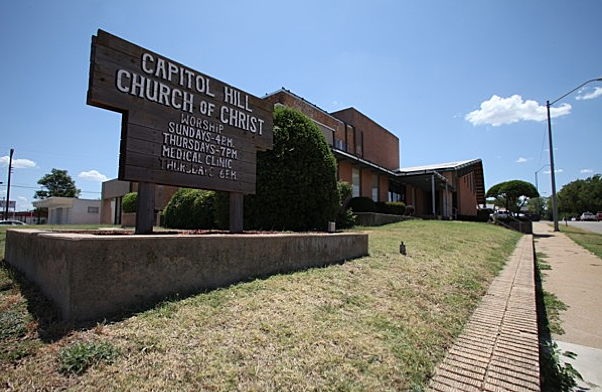 The Lighthouse Medical Clinic, which operates in the meeting place of the Capitol Hill Church of Christ, serves patients, including those without medical insurance, in Oklahoma City. (Photo by Mei-Chun Jau / For The Washington Post)

The Capitol Hill Church of Christ in Oklahoma City got some national news attention — thanks to the ongoing debate over healthcare reform and The Washington Post.
“Health insurance mandate faces huge resistance in Oklahoma” is the title of a recent story in the newspaper’s “Politics” section.

The Supreme Court may have declared that the government can order Americans to get health insurance, but that doesn’t mean they’re going to sign up.
Nowhere is that more evident than Oklahoma, a conservative state with an independent streak and a disdain for the strong arm of government. The state cannot even get residents to comply with car insurance laws; roughly a quarter of the drivers here lack it, one of the highest rates in the country.
When it comes to health insurance, the effort to sign people up isn’t likely to get much help from the state. Antipathy toward President Obama’s signature health-care overhaul runs so deep that when the federal government awarded Oklahoma a large grant to plan for the new law, the governor turned away the money — all $54 million of it.
The idea that the federal government will persuade reluctant people here to get insurance elicited head-shaking chuckles at Cattlemen’s Steakhouse, an iconic old restaurant in the Stockyards City neighborhood, which is lined with street banners reading “Where the Wild West still lives.”

Read the full story.
The story doesn’t mention the Capitol Hill church, but an accompanying photo gallery features images from the Lighthouse Medical Clinic, which operates in the church’s facility.
The Memorial Road Church of Christ in Edmond, Okla., supports the work of the church, including the clinic. (See our recent blog post about Memorial Road’s Mission Sunday 2012. Some of the proceeds from the event support the work at Capitol Hill.)