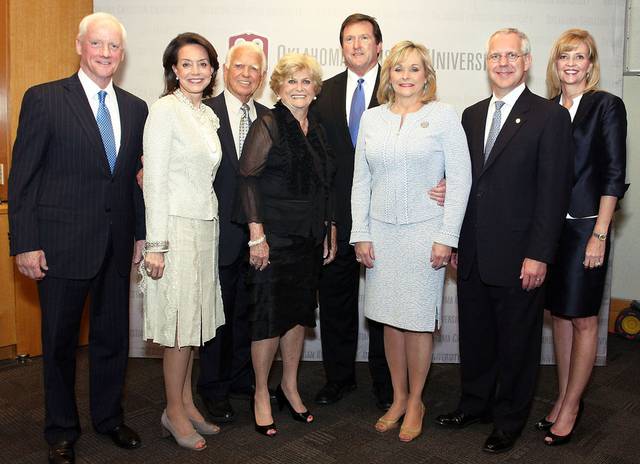 Frank and Cathy Keating, George and Donna Nigh, Gov. Mary Fallin and her husband, Wade Christensen, and Brad and Kim Henry attend a reception Thursday honoring the former governors and their wives, hosted by Oklahoma Christian University at the National Cowboy and Western Heritage Museum. (Photo by David Faytinger, for The Oklahoman, via newsok.com)

Oklahoma Christian University paid tribute to three former Oklahoma governors and first ladies at a gala Thursday.
The college held its 10th annual Associates Dinner on Thursday evening at the National Cowboy & Western Heritage Museum. During the event, the college presented the Lee Allan Smith Spirit of Oklahoma Award to Brad and Kim Henry, George and Donna Nigh and Frank and Cathy Keating.
The university created the award last year to recognize people who have devoted their careers to the betterment of Oklahoma. At last year’s dinner, OC presented the award to former Oklahoma City mayors Ron Norick and Kirk Humphreys and current Mayor Mick Cornett.
During the event, current Oklahoma Gov. Mary Fallin said she and the three former governors and their wives share a special bond, in that they understand the pressures that go along with running a state government.

Read the full story.
See more photos from the event.