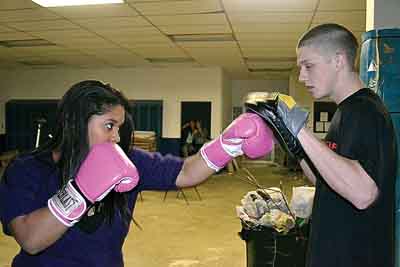 Gilda Arendse practices throwing a few punches at Ben Murphy during a boxing training session at Ohio Valley University. Arendse is among seven members of a boxing team not affiliated with the school but made up of OVU students. (Photo by Sam Shawver, Marietta Times, via www.mariettatimes.com)

The Marietta Times in Ohio reports:

VIENNA, W.Va. – When Ben Murphy lost a schoolyard fight at age 14-after three punches-it marked a turning point in his life.
Today, Murphy, 19, from Toronto, Canada, is a student at Ohio Valley University in Vienna and is one of seven students there forming a boxing team, despite the challenges.
“My dad knew Bryon Mackie, the former Canadian middleweight boxing champion, who had an amateur boxing club in Toronto,” he said. “Dad said I could go on doing what I was doing or I could learn how to box.”
Boxing was sort of a family tradition, he said. His dad took up hockey but Murphy’s grandfather and great-grandfather were both boxers in their native Scotland.