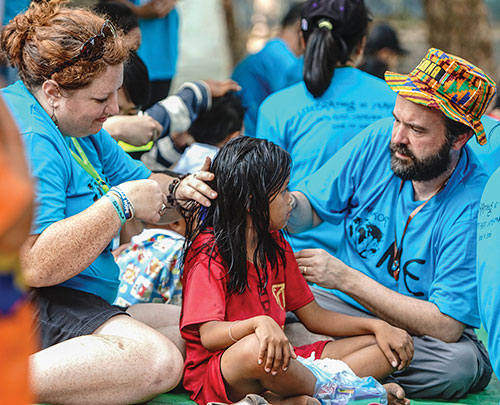 Of lice and men: Can a week of ‘voluntourism’ make a difference?

Erik Tryggestad
President and CEO
SIEM REAP, Cambodia — “ Seven reasons why your two-week trip to Haiti doesn’t matter” was the headline that flashed across my Facebook feed.

Luckily, I was on a one-week trip to Cambodia, so no worries, right? 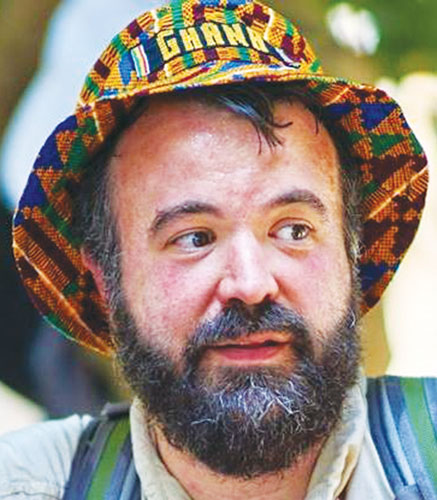 Road Notes | Erik Tryggestad
I thumbed through the piece as I waited for the morning devotional to start at Angkor of Faith, a gathering of young Christians from Southeast Asia. I had circled the world to be here, along with students from Oklahoma Christian University.

To be fair, the article was about secular service trips — not mission trips — though both often get mocked as “voluntourism.” They’re expensive. They do little lasting good and actually can do harm by creating dependence, the author of the article argued.

I’ve read it all before, in books such as “When Helping Hurts.”

“This trip is different,” I thought to myself. I have seen it unify and energize the next generation of Asia’s Churches of Christ. It transforms lives. 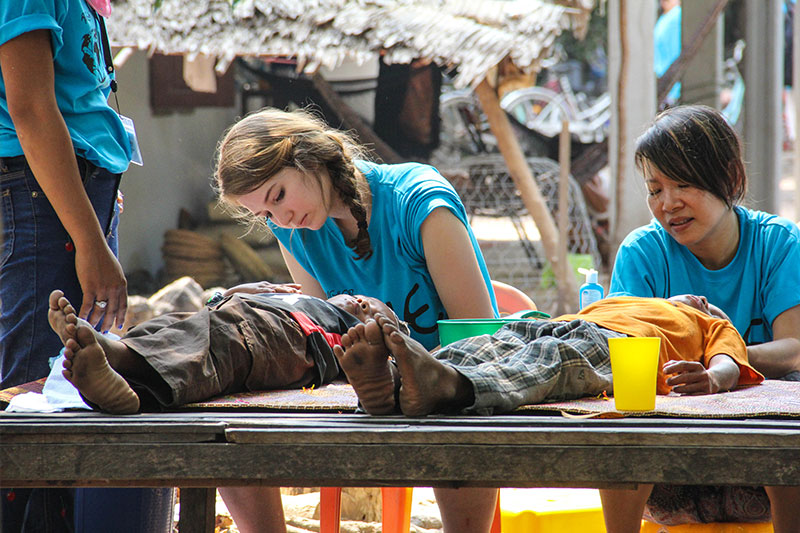 Brielle Allen and Jan Reagan, members of a mission team in Chiang Mai, Thailand, wash children’s hair before sending them to delousing stations operated by fellow Christians in Kvean, Cambodia, during Angkor of Faith 10. (PHOTO BY ERIK TRYGGESTAD)

Joel Osborne, a missionary in Japan, visited Oklahoma a few months ago and talked about a previous Angkor of Faith. An atheist student from Ibaraki Christian University and head of the school’s karate team went on that trip and broke down in tears as he combed the lice from a Cambodian child’s hair.

(“Pfffft. Big baby,” I joked in my mind, fully aware that this dude could pulverize me if he wanted to.)

Back in Cambodia, after the devotional, we rode to the village of Kvean. We ate, sang and danced with the village kids and set up hygiene stations for teeth-brushing and hair-washing.

We were light on delousers and heavy on kids, so I grabbed a cup of water and a plastic lice comb.

Katherine Gould, a missionary who has served in China, showed me how to scrape the nits — lice eggs — out with our fingernails and smush them. The combs weren’t cutting it. 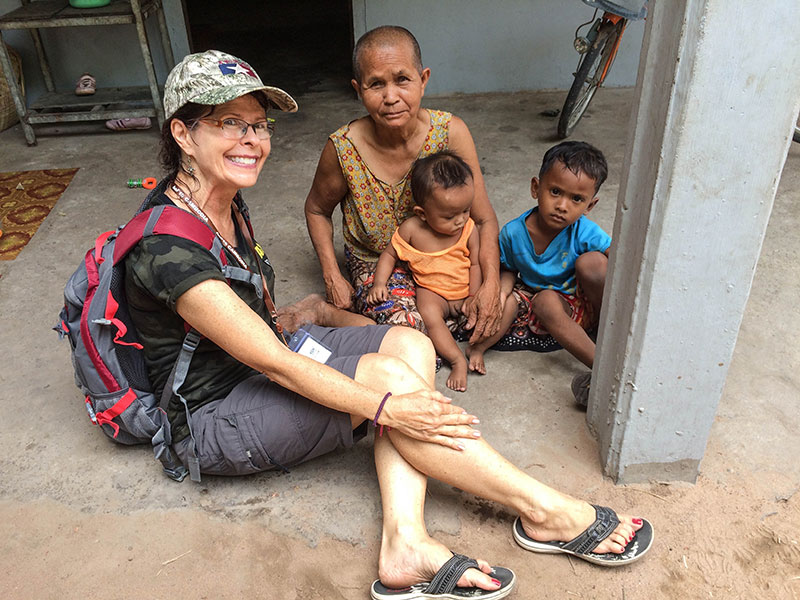 Sharon Welch visits with a woman in the village of Kvean, Cambodia, during Angkor of Faith 10. (PHOTO BY ERIK TRYGGESTAD)

Sharon Welch, a missionary in Cambodia’s capital, Phnom Penh, brought one of the girls, age 9, back to us. She had been through the process but still had nits.

Katherine and I went to work. I combed through the girl’s hair, searching for nits the same way I search for tangles in my 8-year-old daughter’s hair nearly every night.

The tiny white nits were everywhere — everywhere. They wouldn’t yield to the comb or my fingernails.

What I was doing didn’t matter.

“Poor baby. Poor, poor baby,” I kept saying, over and over. I didn’t know what else to do. Too many nits, too many problems. Soon we would have to leave, and the eggs would hatch.

The lice would come back.

Now I was the big baby. Luckily, in 99-degree heat it’s tough to distinguish tears from sweat.

Tonight was my turn to lead worship. How could I sing “Shout Hallelujah” and “They’ll Know We Are Christians By Our Love” after spending the day in a futile fight against Cambodia’s problems? 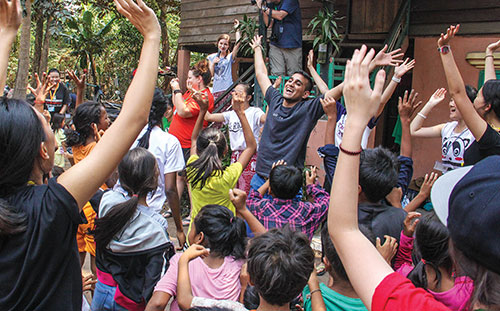 Caught up in my own “voluntourism,” I took my eyes off the Cross. The writer of that article was right. If this was just a service trip, what was the point?

Back at the hotel, I shared these thoughts between songs. I told the young Christians that whatever we do — no matter how much we put into it — means nothing if we take God out of it, if we bury his role as the transformer, the giver of the increase.

Read more stories from Churches of Christ in Southeast Asia and the South Pacific in our series, From the East.
Just two days earlier, we saw that increase as a Cambodian waitress some of the campaigners met last year gave her life to Jesus in baptism.

And that karate guy from Joel Osborne’s story? He’s now a brother in Christ, too.

Yeah, the lice will come back, but that little girl’s entire village watched us try to get them out. Who knows what fruit that will yield?

But maybe God can use Cambodia to save us. 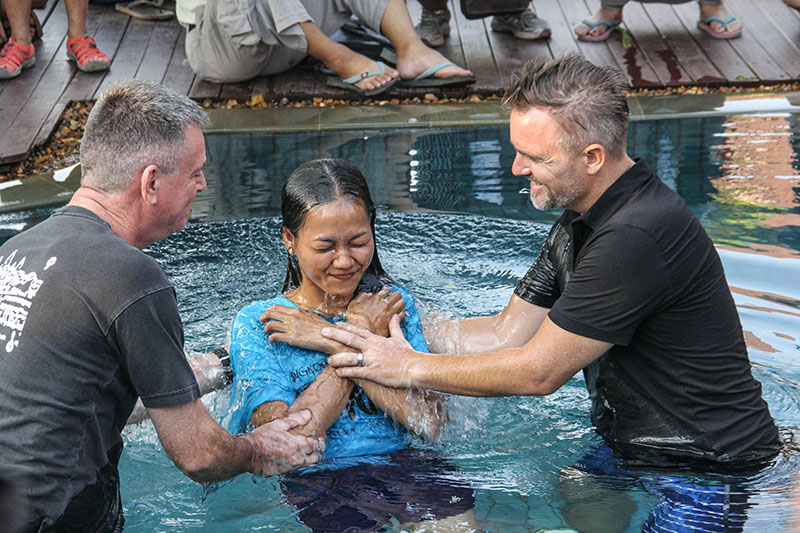 A baptism on the second day of Angkor of Faith 10. (PHOTO BY ERIK TRYGGESTAD)