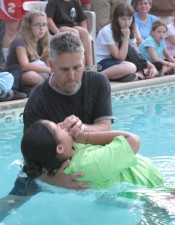 O Happy Day: When Jesus washed their sins away

Bobby Ross Jr.
The soaking wet hugs.
The sounds of crickets and campers’ voices singing praises to God under a starry sky.
The feeling of peace after giving one’s life to Christ, sometimes after dodging frogs and snakes in the water.
For many Christians, baptism at summer Bible camp is a memory they treasure — a life-changing experience they carry with them forever.
Christine Parker did not grow up going to church and did not know muchabout God or the Bible. But in 1981, she attended Sierra Bible Camp inCalifornia.
She was 13 when her great-uncle, Don Williams, baptized her in the pool.
“I remember being deeply moved, and I believed it was God’s prompting,”Parker said. “Having heard here and there about this God who loved medeeply, I had always believed and felt close to God even from myearliest years.
“So this experience of feeling the need to be closer to God throughbaptism fit my relationship with God perfectly,” she said. “In thedecades that have followed, my understanding of the event of my baptismhas deepened and broadened.”
Parker later earned a counseling degree from Harding UniversityGraduate School of Religion in Memphis, Tenn. She is a member of theWhite Station church in Memphis and teaches and speaks at retreats andconferences.

Gilbert Kerrigan felt the pressure.
“Gilbert, why aren’t you baptized yet?” a counselor asked Kerriganduring the first week of junior high week at Camp Wiregrass in Alabamain 1991.
Kerrigan, who had grown up in the church and attended camp since thirdgrade, didn’t have a good answer. He asked Greg Terry, a youth ministerand one of the counselors, to baptize him.
At the chapel service that night — as Kerrigan waited for his parentsto drive to camp to witness his baptism — the speaker displayed a hugecross on stage.
“Then we all helped carry the cross out into this field where they haddug this huge hole in the ground,” Kerrigan said. “That night we buriedthat cross, along with our sins nailed to it. … That really helped meto put my soon-to-happen baptism into perspective.”
Kerrigan is the pulpit minister at the Elmwood church in Lafayette, Ind.

Julie Truex was 14 in 1987 when she made the decision to be baptized at Camp Deer Run in Texas.
“Something just clicked during the Wednesday night devo,” Truex said.“I just knew. There wasn’t the hesitation I’d always had before.”
She remembers the soggy T-shirt she was wearing after the baptism and the hugs.
“There was an immediate celebration, not the come out after you’re dryand dressed and we’ll sing ‘I Have Decided’ that I was used to,” shesaid.
The daughter of a preacher, Truex had felt the pressure to be baptized — but at church.
“Being baptized at camp was for me,” she said. “It was on my terms,with my friends, and without the expectations — real or imagined — ofmy home congregation.”
A member of the Saturn Road church in Garland, Texas, Truex is active in domestic and international missions efforts.

At age 14, Jim Gardner was baptized at Barton Bible Camp in Arkansas in 1984.
“My most vivid memory of that moment is that I was immersed into Jesus by my grandfather,” Gardner said.
His grandfather Bo Cobb was serving as a mentor, Bible teacher andencourager at the camp. His grandmother Peggy Cobb was the head cook.Both are now in their 80s.
Their influence remains strong on Gardner, now preaching minister atthe Woodward Park church in Fresno, Calif. — and a high school teacherat Yosemite Bible Camp in California.
He also helps with a day camp for fourth- through eighth-graders at Woodward Park the week before the Bible camp.
“It’s an intense time of Bible study on sin and salvation,” Gardnersaid of the day camp. “Each night, the kids have homework they do withtheir parent or guardian so that the real study and preparation forbaptism occurs — before we arrive at camp — between the children andtheir parents.”