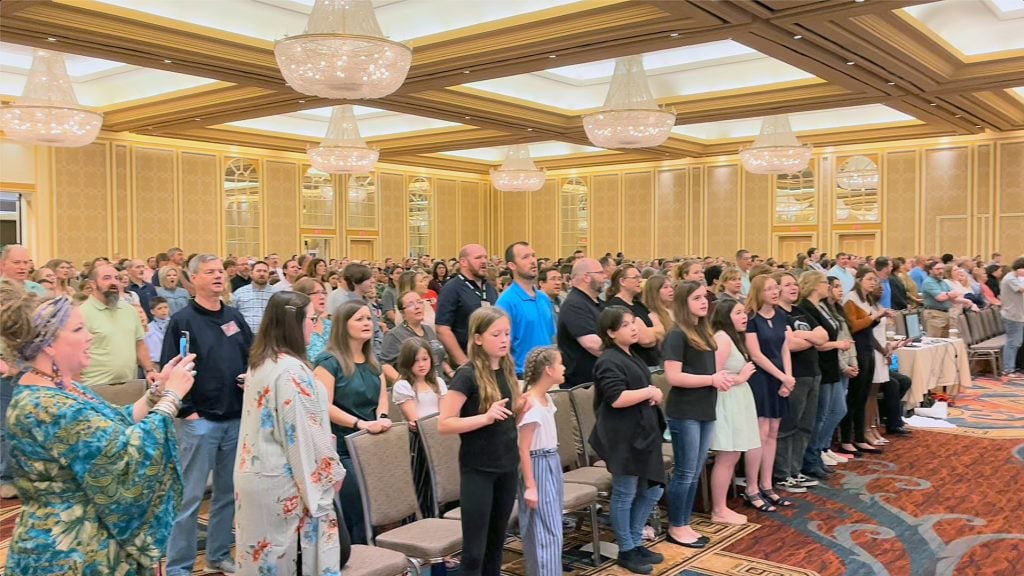 Even after their children graduate, parents return with their churches for the annual Leadership Training for Christ convention. What brings them back?

On the Saturday afternoon before Easter, members of the Western Hills Church of Christ — all clad in yellow shirts — were finishing their lunch break.

In just a few minutes, “you won’t see any yellow shirts in here,” said Leah Bowie. Instead, the members of the Fort Worth, Texas, congregation would spread across the hotel’s conference rooms to watch their young people lead singing, sign for the deaf, give speeches and perform. 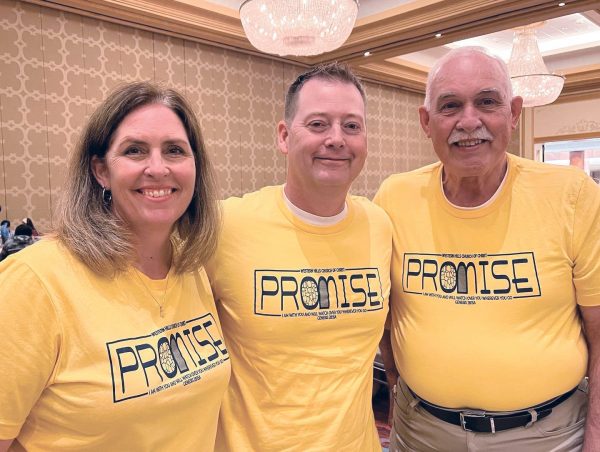 Leah and James Bowie show off their LTC shirts along with Leah’s father, Roger Omer. Although the events are for children, “you can get the involvement of the whole congregation,” Omer said.

But Bowie’s children weren’t among the 14 students from Western Hills who participated in this year’s North Texas Leadership Training for Christ convention. For the first time, she and her husband, James, were here as empty nesters.

“We’re coaches,” James said. He helps with drama, puppets and speech as well as the kids’ annual video production, submitted before the convention begins. Leah helps with scrapbooks, drama and speech. 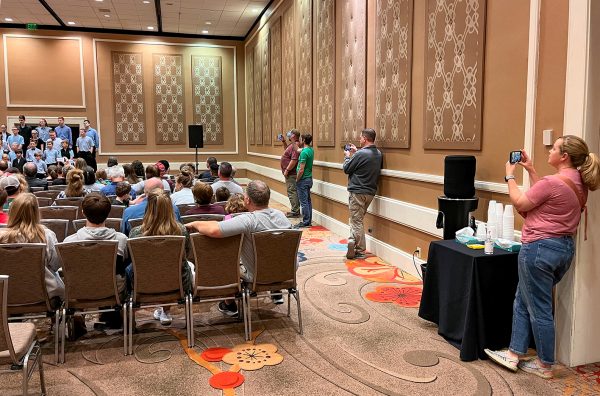 Members of the Memorial Road Church of Christ in Oklahoma City watch and video their children’s choral performance at the North Texas Leadership Training for Christ convention.

Their three sons participated regularly in speech and songleading events. They practiced as a family for the Bible bowl. All three graduated from Harding University, a Searcy, Ark., university associated with Churches of Christ. One recently led a devotional for his small group Bible study.

“LTC helped,” his mother said. “He was prepared.”

Back when the boys were participating, getting to all of their events on time was a bit like coaching football, James said. “You’re not doing man-to-man. You’re doing zone defense at that point!”

This year “it’s easier,” he said. “You don’t have to video the whole time. (You) just cheer them on.”

In hotels and church buildings from Mobile, Ala., to Livermore, Calif., children from Churches of Christ participated in Leadership Training for Christ, or LTC, a program designed to encourage spiritual, mental and social growth among young men and women in third to 12th grade. The curriculum is based on the long-running Lads to Leaders program, which also hosted large conventions in cities including Atlanta; Fort Worth; Fresno, Calif.; Nashville, Tenn.; and Orlando, Fla.

Combined, tens of thousands of church members participate in the Easter weekend conventions, which were canceled in 2020 due to the COVID-19 pandemic. A small number hosted in-person or virtual events in 2021. Some events, such as the first Lads to Leaders convention in Las Vegas, set for May 15, are held at different times.

This year, about 2,070 students participated in the North Texas LTC, which meets in two Dallas hotels, said coordinator Tim Henderson. That’s a smaller turnout than pre-pandemic. Still, the Anatole was abuzz as children pulled wagons loaded with puppets and props to their events. 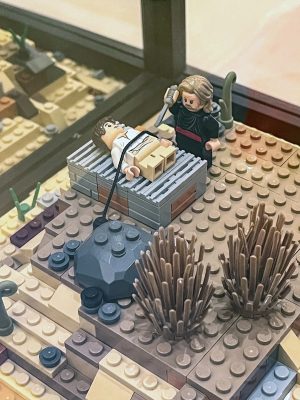 In addition to Bible bowl, drama and puppets, the North Texas LTC features visual art projects. Creed Goss, a fourth grader from the University Church of Christ in Canyon, Texas, depicted in Lego bricks the near-sacrifice of Isaac from Genesis 22. “It represents Abraham’s loyalty to God,” he wrote. This year’s theme was “The Promise,” based on the book of Genesis.

Supporting them was an army of adults armed with clipboards and lanyards. The volunteers rushed past statues of Buddha and elephants in the hotel’s large atrium to tally Bible bowl scores and distribute packets of plaques and tiny gold, silver and bronze medals to the participating churches’ coordinators.

Other church members helped out on the congregational level. In the hotel’s suites, they set up card tables, folding chairs and serving lines for Papa John’s pizza, Jimmy John’s sandwiches and Blue Bell ice cream.

Even after their own kids graduate, many of the adults continue to serve — sometimes for decades.

Manya Leach will soon be joining their ranks. Her youngest, Russell, is 18 and headed to college next year. But she’ll likely stay active in the LTC program at her congregation, the Memorial Church of Christ in Houston.

“It’s not just for the kids,” she says. “It’s the older using their talents to teach the younger. It’s a full-congregation event.” 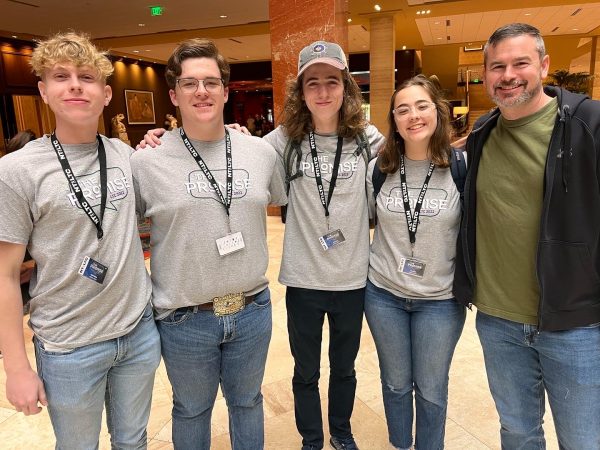 From left are Russell Leach, Lance Nicholas, Andrew Reneau and Katie Shanks of the Memorial Church of Christ in Houston (with youth and family minister Mike Avery).

The students also become trainers as they progress through the program. This year Russell Leach and fellow seniors Katie Shanks, Lance Nicholas and Andrew Reneau coached the Memorial church’s fifth- and sixth-grade chorus. 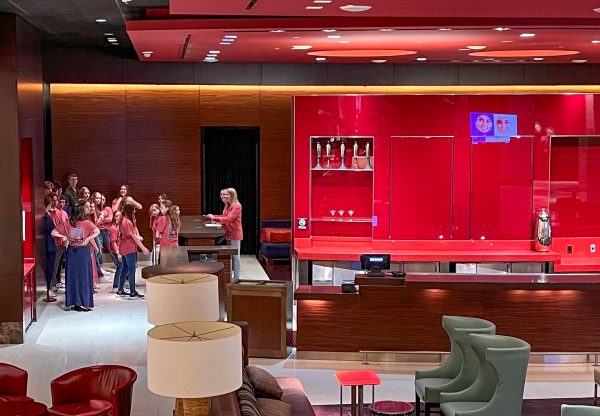 Early on Easter morning, a chorus from the 4th and Elm Church of Christ in Sweetwater, Texas, uses space next to a bar in the Hilton Anatole to rehearse. LTC coordinators invited the chorus to sing during a showcase that preceded Sunday worship.

He quoted the Great Commission that Jesus gave to his disciples in Matthew 28: “Go and make disciples of all nations, baptizing them in the name of the Father and of the Son and of the Holy Spirit, and teaching them to obey everything I have commanded you.”

“The part we focus on a lot of times is the baptizing,” Avery said. “These guys have taken time to make disciples.”

‘We can reach all children’

As the Saturday afternoon activities began to wind down, parents picked up their kids’ artwork and sculptures and made their way to banquets and award ceremonies hosted by individual congregations. 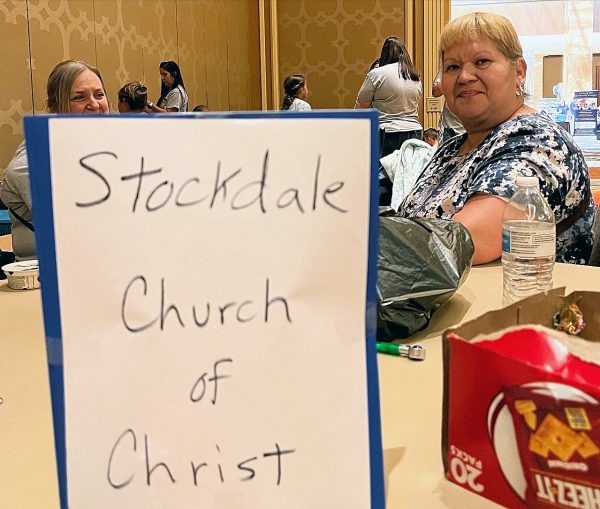 Between events, Carolyn Richter sits at a table in the Hilton Anatole’s ballroom reserved for the Stockdale Church of Christ.

Back in the Anatole’s ballroom, a tableful of parents and grandparents from the Stockdale Church of Christ near San Antonio shared stories about the years they’ve spent helping their kids prepare for LTC.

“We support them with every bit of enthusiasm that we support them with in their sporting activities,” said Carolyn Richter, who’s been coming to LTC for the past decade. Her own daughter has graduated and now has kids of her own, but she comes to support the next generation. “Just because they’re not our kids, that doesn’t mean they’re not in our family.”

The next morning, hotel staff rolled away the tables and set up chairs for a combined Easter gathering. Convention coordinators chose choruses and drama groups to reprise their works for the entire audience. During the worship service that followed, young men gave short devotional talks, led singing and read Scripture. 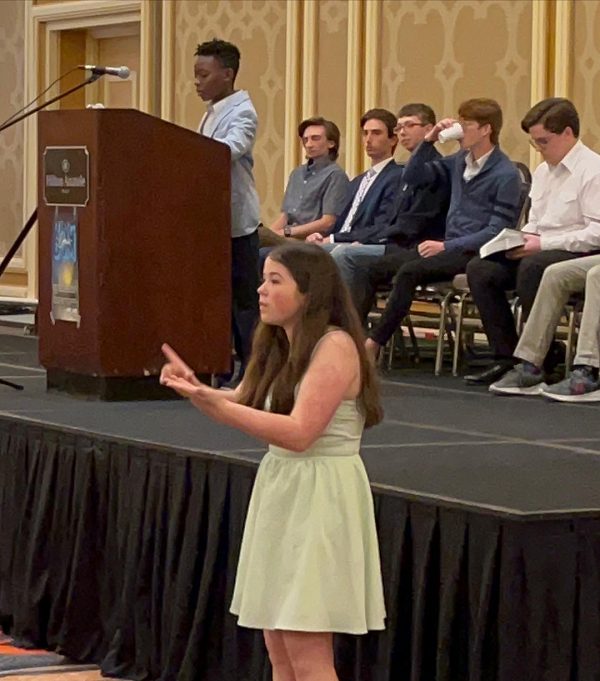 Carson Jackson, 10, participated in Bible reading for LTC and was selected to reach a scripture from Deuteronomy during the convention’s Easter morning worship. Interpreting for the deaf is Maggie Tryggestad, 14, daughter of The Christian Chronicle’s Erik Tryggestad. Maggie has participated in LTC since third grade. Her parents coach the Bible bowl team for the Memorial Road Church of Christ in Oklahoma City.

Carson Jackson, a 10-year-old from the Greenville Avenue Church of Christ in Richardson, Texas, read Deuteronomy 29:10-13, a reminder from Moses of the covenant God made with “your leaders and chief men, your elders and officials … together with your children and your wives.”

His father, Damon, said that LTC is helping his son develop and grow in his faith. And the large Sunday service shows him that he’s part of a fellowship that’s bigger than his congregation. 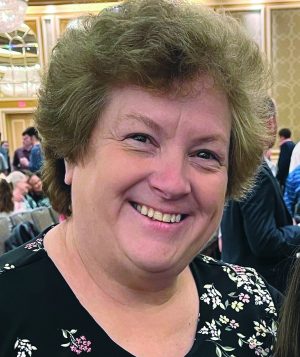 Dawn Deitman first attended an LTC convention in 1991. She had recently moved to Texas from Tennessee and was considering going back. But after assisting with the convention’s sign language program she found a reason to stay in Texas, she said.

As the young men led worship, a row of students at the front of the ballroom took turns interpreting the service for the deaf. Coordinating the signers was Dawn Deitmen, a member of CrossPoint Church of Christ in Grand Prairie, Texas. She’s worked with the program for the past three decades.

“I’ve watched crack babies become interpreters,” she said. “This is the one organization that takes care of the invisible child — invisible to schools and sports.”

LTC allows children to develop hidden talents, Deitman said. And those who participate in the sign language program are encouraged to reach out to the deaf community, a group too often overlooked by churches.

“We can reach all children,” she said. “I think God does good things here.” 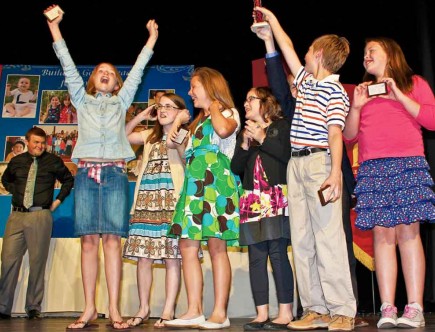