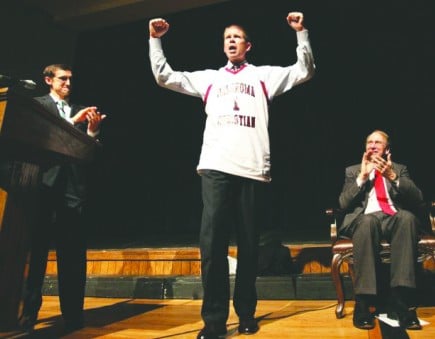 Nothing but net for new Oklahoma Christian University president

BY MURRAY EVANS
OKLAHOMA CITY — To say February was a memorable month for John deSteiguer would be a vast understatement.
Just days after Oklahoma Christian University trustees named him as the university’s sixth president, he hit a near half-court shot during a halftime contest at an OC basketball game. The footage spread across the Internet.
Later in the month, he celebrated his 50th birthday.
The former Truman Scholar recipient at Northeastern State University in Tahlequah, Okla., had no connections to OC when he joined President Mike O’Neal’s staff in 2002 as senior vice president for advancement.
Now, deSteiguer says, he couldn’t imagine serving anywhere else, as he’s fulfilling a longtime desire to be involved in Christian higher education.
“I am really both humbled and honored to be given the opportunity to serve as president of Oklahoma Christian,” deSteiguer said. “There is not another place in the world I would rather be. This community has become our home, and the students, faculty and staff have become like extended family.”
The son of a naval aviator, deSteiguer moved plenty as a child, living in California, Nebraska, Texas and Virginia as well as on the island of Guam.
His family moved to his mother’s hometown of Tahlequah for his high school and college years. Later educational travels took him around the world, including Jamaica and the United Kingdom.
After he and his wife, Darla, graduated from Pepperdine University’s law school — both with honors — they settled in Dallas to live the life of “big-city lawyering.”
But as they started their family, they decided that “we needed to return to our roots,” so they returned to Tahlequah for 10 years. They have two teenage children, Joe and Abby.
DeSteiguer says leaders of other universities “are so envious” when they learn that OC has a daily chapel service that brings together the campus community and that 80 percent of OC’s undergraduates live on campus.
“That spiritually based, residential community, wrapped in an educational experience that is absolutely first-rate — I think that puts Oklahoma Christian in a unique and very coveted position.”
He has a three-pronged vision platform for the 2,200-student university:
• “OC is home. It’s the place where you really learn well. You connect and you grow, and you’re prepared to go out … and make a living and make a life, but you long to return home to visit.”
• “OC also grows. We’re going to grow in our enrollment, and we’re going to grow in our financial strength, measured by our endowment.”
• “The third thing is, ‘OC is mission.’ … Our education is wrapped in this personal, spiritual community. It is life-changing. Our mission is to transform lives for Christian faith, scholarship and service, and I think that’s a mission statement not just for our students, but also for our faculty and our staff. We are committed to that.”