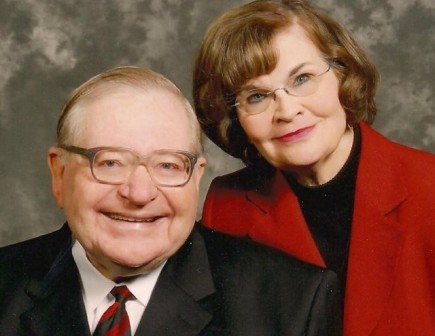 Not ready to say goodbye to beloved minister

Staff Reports
Update: Don Vinzant died March 10. He “peacefully passed from this life surrounded by the songs and prayers of his beloved family.” Read his full obituary.


These are the words of his wife, Carol. The message is small and short, quite unlike the man himself. Yet I dare say thousands of people are walking the earth right now with this sentence hanging over them like a dark cloud.

Don is Don Vinzant, one of our ministers at the Edmond Church of Christ, where my family worships and serves. He has been there forever, and before that he worked with another congregation forever. And before that he was a missionary in Brazil forever.

Sick is really, really ill. Don has a rare form of cancer and a little-diagnosed and untreatable type of leukemia — which, when you think about it, is probably about all that could knock Don down. Add to that a staph infection and you’ve got a man who has been hit hard.
Had this been anyone else in our spiritual family, Don would be doing the comforting. He’d be driving his big sedan over right away to sit with their loved ones and pray over the wounded while they lay in bed. He’d be comforting the rest of us, administering the bear hugs for which he is famous. He’d be reassuring us, putting it all into the proper, eternal perspective.

So in his physical absence, we’re floundering some.  Sure, we’re trying to be there for one another and follow Don’s example, but it’s pretty clear that we’re nowhere near as good at this as he is.

For example, some of us simply cannot follow the procedures and protocol of Don’s hospital stay. Someone who shall remain nameless recently decided she would drop off some soup and chocolate at the hospital for Don and Carol, because it was a cold, rainy day and really, any day is a good day for chocolate (which this unnamed female knows Don likes a lot).

Before this person knows it, she is inside room 409, a privilege reserved for family only, sheepishly looking across at another rule-breaker.

The Vinzants are loved. They are quirky and funny, with servant hearts and self-deprecating ways, which of course means we don’t want Don to leave us. We don’t want Carol and their four children to experience that kind of loss. We as a spiritual family don’t want to hurt that way and feel such a giant void in our personal lives and our community of faith.

It’s a contradiction, really – a big group of Christ-followers who all want to go to heaven selfishly praying for God to let a beloved minister stay with them a while longer.  But we are. We can’t help it.

Last November, Don talked to us about this subject in a message he delivered on suffering and glory based on the eighth chapter of Romans (incidentally, Don’s favorite verse in the Bible is Romans 8:28). He didn’t know what was coming exactly three months to the day later as he and Carol talked with doctors about the possibility of Don having advanced-stage bone and blood cancer. But God did.

“You don’t have to go far … any of the big emergency rooms in town, the big hospitals in town, there’s groaning, crying and weeping. And yet because of that suffering, there are all kinds of opportunities that God gives us to minister to people. And it’s been my limited experience in life that if you help people when they’re suffering, when they’re at their wits end, and you help them with a ministering word from Christ, from Scripture, they never forget that word and they may never forget you … and they never forget the church that ministers to people.”
Sign Don Vinzant’s guestbook on his Caring Bridge page.