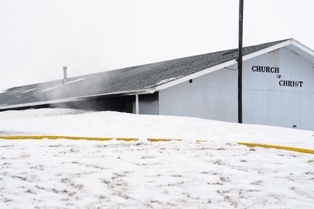 North Dakota church prays for accused arsonist as it rebuilds

The Dickinson, N.D., Church of Christ’s building was damaged by fire Dec. 2. (Photo via www.thedickinsonpress.com)

The Dickinson, N.D., Press features an update on the Dickinson Church of Christ, destroyed by arson in December. (See a previous blog post.)
On Feb. 28, Joshua Whitworth, 21, pleaded not guilty to charges of arson, burglary and theft, the newspaper reports.
Dean Adams, who preaches for the church, said damages likely will top $100,000. The church is insured, but weather has stalled the rebuilding process, he said. (We reported on Dean and his wife, Sherry, in 2008.)
Meanwhile, the church meets in the offices of Dickinson Ready Mix, according to the newspaper.

The office location doesn’t seem to bother anyone, Sherry Adams said.
“All of our people are still there and still going so you know you have that family camaraderie type thing no matter where you’re going to meet,” she said. “We have not lost any members because of the fire. We’re actually getting a few more members, not because of the fire but because people are moving into the region.”
The Adams’ said they and other members are excited to move forward.
“I think it will be nice to get back into the building just because of the memories and that kind of thing, but for us it’s the same no matter where we’re at,” Sherry Adams said.
She isn’t angry at Whitworth.
“I guess the only thing that we can say is we’ve been praying for him and his family, because no matter what I know it’s a hard time,” she said. “None of us have any hard feelings or anything for him. You just grow from your trials.”