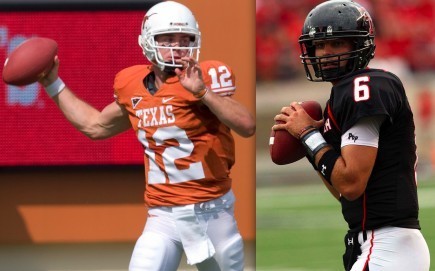 INSIDE STORY: No football feud: Harrells and McCoys on friendly terms

Bobby Ross Jr.
Don’t look now, but the Heisman Trophy — college football’s top award — could go to a young man raised in the Church of Christ.
He’s a record-setting quarterback whose parents met at Abilene Christian University in Texas and instilled in him an appreciation not just for touchdowns but also for faith and values.
Of course, I am talking about Texas Tech’s Graham Harrell — and Texas’ Colt McCoy.
Believe it or not, both fit the above description.
Just as each leads a powerful Big 12 offense with national-title aspirations, each makes it a point to attend worship services every Sunday.
“It’s just kind of a neat deal that two small-town Texas boys would end up with that many similarities,” said Sam Harrell, Graham’s father.
More common ties:
• Each Heisman hopeful’s dad coaches a successful Texas prep football program — Sam Harrell at Ennis High School and Brad McCoy at Graham High School.
• Each player has a brother on Abilene Christian University’s football team — quarterback Clark Harrell and receiver Chance McCoy.
• And each has another brother, too: Zac Harrell coaches receivers at Denton Ryan High School in Texas. Case McCoy is a highly touted junior quarterback at Graham.
Sam and Kathy Harrell are members of the Creekside Church of Christ in Midlothian, Texas. Although Graham grew up in the Church of Christ, he attends a Bible church in Lubbock.
“I’m just glad he goes every Sunday,” Sam Harrell said.
A church member recently e-mailed Sam Harrell, describing how his son showed up the morning after a late game and visited with a fifth-grade Sunday school class about making right choices.
Brad and Debra McCoy are members of the Eastside Church of Christ in Graham. Colt’s grandfather, Burl McCoy, is a member of ACU’s Sports Hall of Fame for his exploits as an athlete and women’s basketball coach. Colt was baptized at age 13 by his grandfather.
“God has blessed him with tremendous athletic ability, and he has always done his best to give God the glory for that,” Brad McCoy said of Colt.
Colt and his roommate — Longhorns wide receiver Jordan Shipley — attend the Westover Hills Church of Christ in Austin. On a recent Sunday, Shipley discussed his faith with a large group of teenagers at the church. Colt sat in the audience and provided “entertaining interaction” with his friend, as one member who attended described it.
“They are both outstanding young men, standing up for their faith,” the member said.
At press time, Graham Harrell was ranked No. 1 and Colt McCoy No. 2 in some Heisman polls. The Red Raiders were 10-0 and No. 2 in the AP Top 25. The Longhorns were 9-1 and ranked No. 4.
Texas’ only loss: a 39-33 upset when Harrell connected with Tech’s Michael Crabtree for a 28-yard touchdown with one second remaining Nov. 1.
But there’s no feud where the Harrells and the McCoys are concerned. Only friendly competition. Both fathers have known each other since their ACU days.
“We were friends, but we got to be a lot closer once we were in the coaching world together,” Brad McCoy said.
These days, both families stay busy keeping up with their sons on the gridiron.
On a recent Saturday, Brad McCoy caught most of the Texas-Baylor game in Austin before a quick flight to see the last half of ACU’s 47-17 win over Midwestern State in Abilene. Other weekends, his wife will attend one game while he goes to the other.
Since Graham is a senior and Clark isn’t playing much at ACU, the Harrells focus on Tech games. They saw a game in Abilene this season but expect to enjoy much more Wildcat action next year.
As for the Heisman talk, Sam Harrell said it’s not something that he and Graham discuss. “I just don’t hardly even think about it or talk about it,” he said.
It’s as if Sam Harrell can’t bring himself to believe that his son — playing football in the dusty plains of West Texas — could bring home the game’s biggest individual prize. Indeed, until Graham’s big game against Texas, most analysts gave him little chance at the trophy. Now, it seems well within reach — if he can survive a Nov. 22 showdown with No. 5 Oklahoma.
Heisman or no Heisman, Colt McCoy has kept his eyes on the ultimate prize, his father said.
“He just understands that God’s got him doing this for a reason,” Brad McCoy said. “If he can witness to people through his football, then he feels like that’s the purpose that he’s here.”
Bobby Ross Jr. is Managing Editor of The Christian Chronicle. Reach him at [email protected].