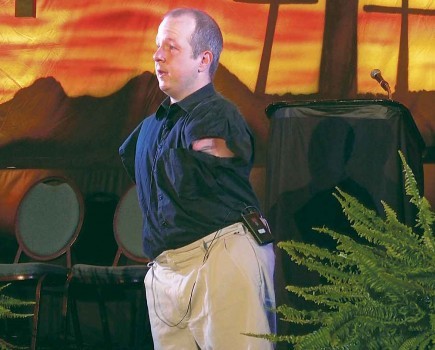 ‘No Arms, No Shoes … Still Serving’

Despite physical challenges, Chet McDoniel glorifies God and delivers an inspirational message of hope in Jesus.

That’s when a tattletale neighbor clocked the boy’s wheelchair going 25 mph down a hill to school and ratted him out.

“My mom hit the roof,” recalled McDoniel, 32, who was born with no arms and extremely short legs. “My dad looked at me and said, ‘Awesome!’”

The 4-foot-1-inch inspirational speaker related that anecdote at this summer’s Spiritual Growth Workshop, a biennial gathering of Churches of Christ in the Sunshine State.

Moments before, the crowd had watched with curiosity and caution as McDoniel shifted out of his powered wheelchair and stepped slowly onto the stage. He sported a sleeveless black dress shirt, short khaki pants and bare feet.

“Let me be as plain as possible,” McDoniel said after breaking the tension with his humor. “I have no interest in a miracle. After 32 years in a body with no arms, why on earth would I want to start over with a new body part?

“Quite frankly, I don’t understand what you people do with arms,” he joked. “They don’t make a bit of sense to me.”

HE MAKES NO EXCUSES

McDoniel dubbed his talk “No Arms, No Shoes … Still Serving.”

The title reflected his belief that he does not need arms to glorify God.

McDoniel makes no excuses — a fact that impressed Spiritual Growth Workshop director Joe Roberts, who invited him to address adults and teens.

“He doesn’t feel sorry for himself,” said Roberts, former minister for the Orange Avenue Church of Christ in Eustis, Fla. “He decided what God gave him was a blessing, and he was going to use it for God’s glory.”

A member of The Hills Church of Christ in North Richland Hills, Texas, McDoniel made the 1,200-mile drive to Central Florida with his wife, Joni, and their daughters, Hannah, 4, and Olivia, 4 months.

The 2002 University of North Texas graduate uses his feet to maneuver an electronic steering column as well as the drive throttle and brakes.

“For just anybody on the street, it would surprise them how much he can do regardless of his physical appearance,” Joni said. “He can drive, type, play video games, play board games with Hannah and feed Olivia a bottle.”

“It blew me away that anybody would want to choose a life where they were going to have to serve me in ways that other wives would not have to do,” Chet said. “That’s true love. It’s looking past the outside and looking on the inside.”

Joni said she and Chet could talk about anything — then and now.

“He has always been compassionate, caring and willing to do anything for me,” she said. “I knew he really listened to what I was telling him, and he was one of the few people that I could really tell everything. It is a love that grew from friendship.”

WHY HE LOVES DISNEY

Chet loves Disney, as evidenced by the Mickey Mouse case on his iPhone.

He fell in love with Disney World as a high school student when he visited the theme park and cast members knelt to speak to him eye to eye.

“At a business establishment, I’m usually ignored, not the first to be talked to,” he told The Christian Chronicle. “People assume that the wheelchair means mental difficulty. They’re not trained to think any differently, I guess.”

But Disney is the exception, he said.

His love for Disney led to a job: selling trips to the theme park. Later, he and Joni started their own travel agency, a successful venture that serves more than 130 independent contractors, he said.

Chet conducts business by tapping his toes on his iPhone and iPad.

When invited to the Spiritual Growth Workshop, Chet had never heard of the regional event, which just celebrated its 30th anniversary.

Still, he was inclined to accept, even more so when Roberts informed him of the location.

“Joni was sitting in the car with me, and she heard him say that, and she said, ‘Accept it. Take it. Do it,’” Chet said with a laugh. “We came a week early and stayed at Disney World and played.”

McDoniel, author of “I’m Not Broken: You Don’t Need Arms to be Happy,” encouraged the adult workshop participants to make the most of their God-given talents.

“I may not have arms, but when my 4-year-old daughter runs across the room, throws her arms around me and says, ‘Daddy, I love you,’ then I know I’m not broken,” he said. “I’m not ashamed of what I look like because God is perfect, and in him I am made perfect.”

That same day, McDoniel urged a teen audience to love like Jesus loves and not to judge — or bully — those who look differently than they do.

Everyone else saw “that jerk” Zacchaeus, McDoniel said, referring to the tax collector referenced in Luke 19.

Jesus saw “a lost soul up in a tree.”

“God has no place … for bullies,” McDoniel told the teens, relating his own traumatic experience with a fellow student who taunted and teased him. “You are not a follower of Jesus if you call people names or push people around.”

Emily Stetzinger, 12, a member of the Concord Street Church of Christ in Orlando, said McDoniel inspired her.

“I thought it was really cool how, even though he didn’t have arms and barely legs, he still could go through school, with bullies picking on him, and still could get on with his life,” Emily said. “It’s really amazing that … he can still get around and tell people about God, even with his disabilities.”

Through his speaking ministry, McDoniel takes his message of hope and happiness in Jesus Christ to churches, schools and corporate events across the nation.

“I know what we’re saying is not that profound, but God is using what we’ve been through to grab people that need to hear it,” he said. “That’s what makes it so worthwhile.

“It’s not easy to fly in and fly out,” added McDoniel, who maintains a website at youdontneedarms.com. “My body gets tired faster than some others. I have to give up my power chair on a lot of trips, and that’s not fun. But I would do it in a heartbeat.”