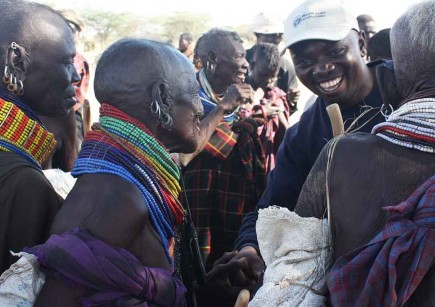 Erik Tryggestad
TIMAU, Kenya — The journey from Nairobi to this remote African village, at the foot of Mount Kenya, was supposed to take four hours. After a couple of wrong turns, it was closer to seven.
Ebenezer Udofia apologizes for the delay. His guests, from the U.S. offices of Healing Hands International, don’t mind. After all, the circuitous route carried them past a herd of roadside zebras and across the equator — three times.
Udofia, a 37-year-old Nigerian, acknowledges that he’s still finding his way in this East African nation. What he lacks in navigational skills, however, he makes up for in personality.
When he and his guests finally reach their destination — a drip irrigation garden outside Timau — the Masai women who tend the garden dance, sing and cackle with delight. Udofia smiles and laughs as he recalls the farming seminar he hosted here a few months ago. Then he reminds the women of Christ’s love for them.
He never wanted to be a preacher. His father, Nathaniel, was a Church of Christ minister in Nigeria’s predominantly Christian south who moved the family to Niger State — about half Muslim and half Christian — to plant churches. Udofia played with Muslim children.
“We grew up together, and we played together,” Udofia said of his Muslim neighbors. “We lived as brothers.”
Though he loved the Lord, just as his father did, Udofia said he saw too many Nigerian Christians become dependent on U.S. support.
“When you wait for support from the USA, you work as if you’re working for the Americans — not God,” he said. “I wanted to learn something that would help me support my family and support the church.”
He studied animal husbandry, agriculture and education in college. During a year of compulsory government service, he wrote a guide to raising rabbits. A wealthy Muslim read the book and hired Udofia to work on his farm in Nigeria’s predominantly Islamic northeast.
Brad Blake, a Church of Christ missionary in the nearby town of Maiduguri, visited Udofia to get advice on farming in northern Nigeria’s arid climate. Later, the missionary introduced Udofia to David Goolsby, agricultural director for Healing Hands International, who conducted drip irrigation seminars across Africa.
The Nashville, Tenn.-based ministry asked the Nigerian to serve as its agricultural representative to Africa. Though it meant taking a salary from the U.S., Udofia said he was inspired by the ministry’s focus on alleviating the suffering of the poor, orphans and widows while leaving their dignity intact. He began working for Healing Hands in 2007. A year later, he married another church member, Regina, whom he met at a congregation in Nigeria’s capital, Abuja.
The couple hosted sustainable farming and food preservation workshops for Muslims and Christians. They were dedicated members of the Wulari-Jerusalem Church of Christ, a 200-member congregation in Maiduguri.
When gangs of radical Muslims swept through the city in 2009, burning churches and killing pastors, the local Muslims protected the Church of Christ because of the kindness its members had shown, Udofia said.
In the next two years, however, the violence became worse. Healing Hands moved the couple and their infant daughter, Grace, to Jos, Nigeria, but religious tension also was high there.
Then the Nairobi Great Commission School, a church-supported ministry training program in Kenya, approached Healing Hands about teaching sustainable farming to its students.
Udofia accepted the challenge and moved his family to Nairobi in early 2011.
“We shed tears,” said Regina Udofia, who had never visited Kenya before the move. “We were not really that excited that we were leaving our country for a different one.”
“But we had concluded, my husband and I, that anywhere with Jesus we can safely go,” she said, referencing the lyrics of a popular hymn. “God brought us here.”
Ebenezer Udofia’s courses on agriculture have improved the lives of students at the Great Commission School, said principal David Tonui.
In addition, the Nigerian immigrant has traveled to remote locales across East Africa — including Timau — teaching farming. In each village, he is greeted with smiles and laughter.
“He’s so excited about his work,” Tonui said. “He’s everywhere.”