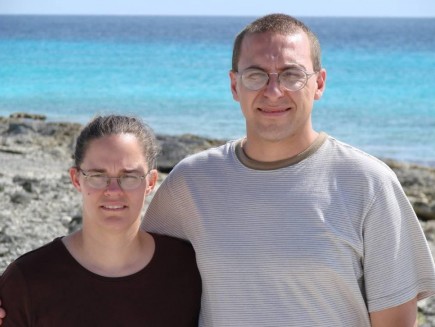 Erik Tryggestad
At first it seems almost like a waste of resources — a preacher in church-rich Tennessee planning to minister to an island only 27 miles long with a population of less than 15,000.
Martin Klamm doesn’t see it that way. This month the minister, his wife, DeAnna, and their three daughters, ages 12, 9 and 4, leave Clarksburg, Tenn., for the island of Bonaire. The family plans to dedicate at least the next five years to mission work on the island, part of the Netherlands Antilles, north of Venezuela.
When he speaks about his future home to fellow church members, Klamm asks them to imagine how far they’d have to drive to worship if their congregation didn’t exist. In west Tennessee, another Church of Christ seldom is far away.
But if the church in Bonaire disbanded, members would have to take a 15-minute plane ride to meet with the church on the island of Curacao — at a round-trip cost of at least $100, Klamm said. “That gives you an idea of how closed off from the rest of the world an island is,” he added.
Church members planted a congregation in Bonaire in 2001, said Larry Waymire, who then served as a missionary in nearby Aruba.
The small congregation meets in a community center or under a tree at a member’s house, Klamm said. The island’s government has agreed to give the church property. The Klamms plan to oversee construction of a church building and reach out to the island’s inhabitants. During a November campaign the Klamms and a small mission team signed up 133 people for Bible correspondence courses, Waymire said.
The Klamms also hope to get people baptized on previous campaigns — especially men — recommitted to the church. Currently the only faithful attendees are women.
“The church has struggled because of a lack of leadership on the island,” Waymire said. “We have had several baptisms, but without someone to follow up, it has not been easy to keep the growth going.”
HELPING CHURCHES ON ISLANDS
Waymire told The Christian Chronicle about the needs in Bonaire on a recent cell phone call from Bermuda, about 1,800 miles northeast of the Netherlands Antilles. Waymire, who served as a missionary in Aruba on two occasions for a total of 12 years, traveled to Bermuda to conduct an evangelism seminar for the 50-member West End congregation. His wife, Carol, conducted classes for women.
Bermuda, a group of islands administered by the British government, is home to several Churches of Christ, one with about 200 members, Waymire said. That’s not true of all of the islands off America’s Atlantic coast and in the Caribbean Sea. Many have small, struggling congregations, and Waymire plans to conduct additional seminars and lead mission teams to islands throughout the region.
The Klamms, who grew up in Kansas, became interested in island evangelism while studying at Freed-Hardeman University in Henderson, Tenn. They were considering mission work in the South Pacific — possibly New Caledonia, a French-administered island with 244,000 souls and no church presence — when the church in Parsons, Tenn., contacted them about the opportunity to serve in Bonaire.
Martin Klamm encouraged church members to visit and support missions across the globe’s island communities.
“There are thousands of islands around the world with people who have no access to the gospel,” Martin Klamm said. “So many islands out there don’t even have a Church of Christ.”
TO SUPPORT MISSIONS IN BONAIRE, contact the Parsons, Tenn., church at www.parsonscoc.com or call (731) 847-2462.