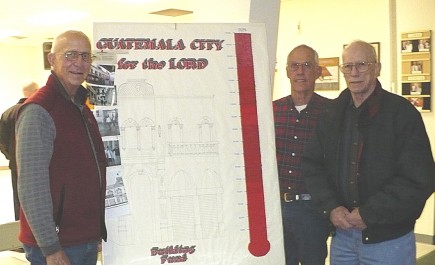 staff reports
GUATEMALA CITY — Members of the Pinares church in this Central American nation are one step closer to launching a new congregation in the heart of their city.
In March 2008 the Cloudcroft, N.M., church committed to raise $170,000 to purchase a large, historic building in downtown Guatemala City. Roberto Alvarez, a Guatemalan minister supported by the Cloudcroft church, and the Pinares church, located in the northern part of Guatemala City, “had a dream of evangelizing this downtown area,” Cloudcroft elder Wesley Lane said.
“The building came on the market at a very appropriate time, and the Pinares elders negotiated a very good contract for its purchase,” Lane said.
Cloudcroft committed $25,000 to the project and devoted one Sunday contribution each month to add to the fund.
But at the beginning of 2009 the church was still several thousand dollars short of its goal. Church elders made plans to borrow the balance. But “God works in wondrous ways,” Lane said.
The Ozona, Texas, church, which already had contributed to the fund, gave an additional $5,000 and the Mayhill, N.M., church gave an additional $10,000. “This put the fund over the top,” weeks ahead of the church’s target date of March 1, Lane said.
Alvarez and the Pinares church will submit remodeling plans for the building to the Guatemala City government. The Cloudcroft church will launch another fund-raising campaign when the costs of the renovations are known.
The church’s elders thanked the congregations and individuals who contributed to the purchase of the new church’s future home.
“This building is within walking distance of over 1 million people who have very little, if any, contact with a church of any kind,” Lane said.
FOR MORE INFORMATION, contact the Cloudcroft church at (575) 682-2395.