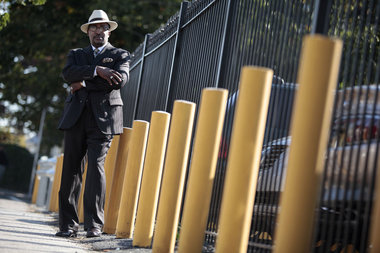 Stanley Carter poses among the security pillars outside Newark Church of Christ’s parking lot. (Photo by Matt Rainey, The Star-Ledger)

The Star-Ledger in Newark, N.J., reports:

NEWARK — Newark Church of Christ has always been a good place to worship, but its parking lot may not be the best of locations — situated along a city street where car thieves go joyriding at high speeds.
Often the miscreants try to make a sharp turn and — not prepared for how tight the corner really is — hurtle out of control into the black wrought-iron fence that rings the church parking lot across Clinton Avenue.
“This has been a four- to five-year problem,” Stanley Carter, a member of the congregation, says of the nighttime demons that plague his house of prayer.
And an expensive problem at that for the 73-year-old stately brick church of 1,000 members. Carter said the church has spent about $20,000 to fix and buttress the fence, but it was no deterrent.
Until now.