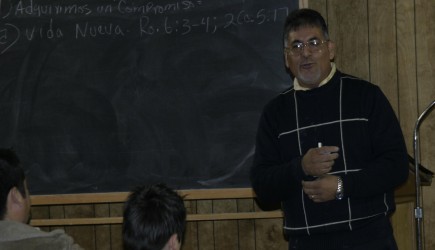 Jonathan Cannon
OKLAHOMA CITY — About 50 people filled the auditorium of the Southeast church on a recent Sunday night.
However, as many as two-thirds of the Hispanic congregation may be forced to leave the state because of a tough new anti-immigration law in Oklahoma, minister Felix Martinez said.
The Oklahoma Taxpayer and Citizen Protection Act of 2007 makes it more difficult for undocumented aliens to live and work in the state.
“What it comes down to, basically, is we have people breaking the law,” said state Sen. Cliff Aldridge, a Republican who is an active member of the Del City church.
The law applies additional pressure on employers to verify the legal status of employees, including subcontractors in the construction industry, where a number of Hispanic men work.
But leaders and members at the Southeast church see the law as contradictory to Christian principles and fear it could hurt not only families, but also the church’s ability to reach the lost.
Most speak only Spanish and were interviewed by The Christian Chronicle using a translator.
Member Abel Maldonando said he owns a construction company with six employees, but only one of the workers is a legal resident — and it’s not him. “Right now, it’s frustrating because every morning I leave the house and I don’t know if I’m going to come back,” he said.
Maldonando missed a week of work immediately after the law went into effect on Nov. 1 because many of his workers returned to their native countries or just didn’t show up for work. He said, that in addition to difficulty finding reliable employees, he fears he will have trouble finding construction jobs.
Besides affecting undocumented aliens’ ability to work, the new law also makes it more difficult to get identification. The law requires issuing agencies to obtain proof of legal status each time someone renews a driver’s license or identification card, which a person previously could do by simply swapping the expired card for a new one.
“The biggest problem I have now is living on a day-to-day basis,” said Lilly Corral, a Southeast member and mother of three. “When the school year ends, I’m going to go back” to Mexico.
Maldonando worries he might be forced to leave so suddenly that he’d be unable to take his possessions with him. “I’ve already set up a person that is here legally who can take care of all of my things in case something happens to me,” he said.
The new law affects more than just illegal immigrants, however. Legal residents and even U.S. citizens who help undocumented aliens knowingly or unknowingly could be guilty of a felony punishable by a year in prison or a $1,000 fine. But the law is not stopping ministers such as Martinez.
“I haven’t made any changes,” said Martinez, a legal resident. “If someone needs a ride to the hospital, I’m going to give them a ride to the hospital. If someone needs a ride to the store, I’m going to do that.”
Like Martinez, José Lozano, minister at a Hispanic church in Tulsa, said the law won’t keep him from showing Christian compassion to anyone.
However, ministers fear the law could make outreach in Hispanic communities difficult.
“It’ll make it difficult to preach the word,” Southeast member Miguel Cabrada said, suggesting that undocumented aliens will be less likely to answer their doors. At the same time, they could be more hesitant to venture out into the community or attend church, he said.
But Aldridge said he stands behind his support of the law.
“From a biblical point of view, I think God wants us to try and help everybody,” he said.
“But I think if you read the intent of the Bible, God also expects us all to obey the laws of the land.”