Tom Olbricht
Acts is the Restoration Movement’s book. From the late 18th century, leaders of the movement have displayed an unmitigated interest in the text. In the mid-1800s, the editors of the American Union of Baptist Commentary assigned only one commentary to a Restorationist, and that was Acts to Alexander Campbell.

Tom OlbrichtStrictly speaking, however, Campbell’s 1858 volume was more of a translation with extensive notes than a commentary.

The first major Restorationist commentary on Acts was written by J.W. McGarvey, a former president of the College of the Bible in Lexington, Ky. Published in 1872, McGarvey’s “A Commentary on Acts of the Apostles” went through various editions and is still available today through Gospel Advocate’s Restoration Reprints.

McGarvey’s work has been considered the flagship Acts commentary by many Restorationists through the years. For those preaching through Acts, however, a more helpful commentary is one still in print by H. Leo Boles, a former president of Lipscomb University in Nashville, Tenn. (“A Commentary on Acts of the Apostles.”) 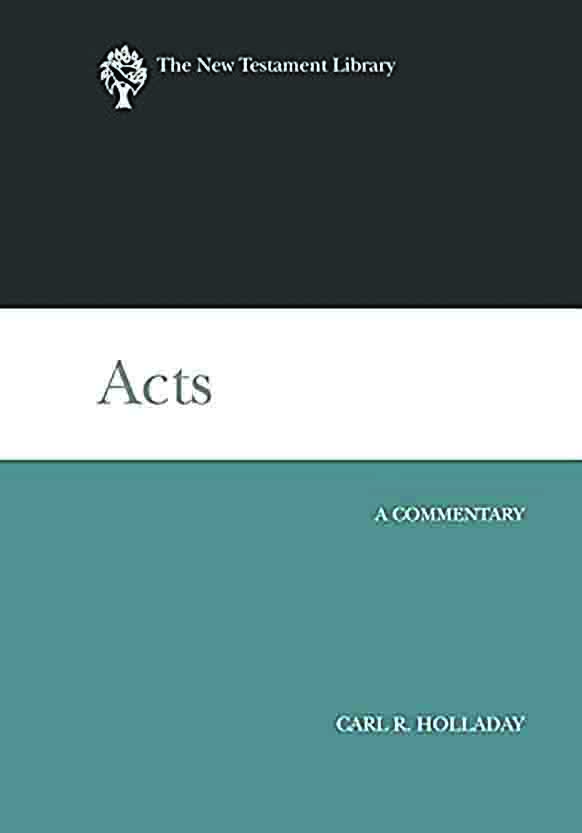 Carl R. Holladay. Acts: A Commentary (The New Testament Library). Louisville, Ky,: Westminister John Knox Press, 2016. 672 pages. Many other commentaries on Acts have been published by Restorationist scholars, but all of these have now been superseded by the recent commentary of Carl R. Holladay, “Acts: A Commentary,” part of the New Testament Library series.

Holladay’s commentary has many valuable features that facilitate its use. It begins with an eight-page, detailed table of contents followed by the location of tables and charts, a preface and no fewer than 13 pages of abbreviations.

Rather than relegate the bibliography to the back, Holladay then provides 30 pages of references, setting out the academic insights of international scholarship on Acts, but mostly works in English. These are all major contributions. No superfluous studies are included.

The introduction extends for 70 pages and has information regarding:

• Authorship — clearly the same as the Gospel of Luke, Holladay writes, but certainly not Luke the physician.

• The meaning of “Acts” — Studying the Greek (“praxis”), Holladay argues for a “theological literary” approach to history.

• The text of Acts — examining four textual groupings, including the Codex Bezae and the D text tradition, plus discussion of literary style as an expression of theological purpose.

The introduction initiates the reader to current insights and conclusions regarding Acts and is especially noteworthy in regard to textual matters. The depiction of the theological purposes of Acts is thoughtful and creatively innovative, but clearly endemic to the text of Acts.

The commentary proper extends for 437 pages. The text of Acts is divided into sections so as to help the reader detect the ongoing purpose of the narrative.  Each section includes Holladay’s refreshing and somewhat colloquial translation from the Greek text. For example:

“When they heard this they were slashed to the heart and said to Peter and the rest of the disciples ‘What should we do fellow brothers?’ And Peter said to them, ‘Repent and be baptized, each one of you, in the name of Jesus Christ for the forgiveness of your sins, and you will receive the Holy Spirit as a gift.’” (Acts 2:37-38)

Notes follow the translation with important attention to the reasons for the translation. All the Greek characters are transliterated into the Roman alphabet for those who work with the Greek text. Footnotes also appear explaining the content in the text. These excellent additional observations are very helpful.
The commentary ends with a detailed and significant index on Scripture and other sources as well as an additional index on subjects and authors — nearly 100 pages.

Especially important in this commentary are the comments on the text of Acts because of the various questions raised by the numerous manuscripts and ancient citations. Because of Holladay’s expertise in Jewish backgrounds as well as magic and the demonic, the reader is introduced to cutting-edge insights. His observations are especially helpful in respect to the citation of the Old Testament in Acts.

Holladay has carefully fleshed out and presented insightful suggestions regarding the relationship of Acts to the letters of Paul — some of which he declares problematic, but about which he is not dogmatic.

The prose of this monumental exposition is enlightening and straightforward. The commentary will most likely appeal to those with some graduate work in biblical studies.

Despite the price, the volume should be at the forefront among Acts commentaries for many years to come and fulfill the role of the scholarly commentary that replaces McGarvey among Restorationists.