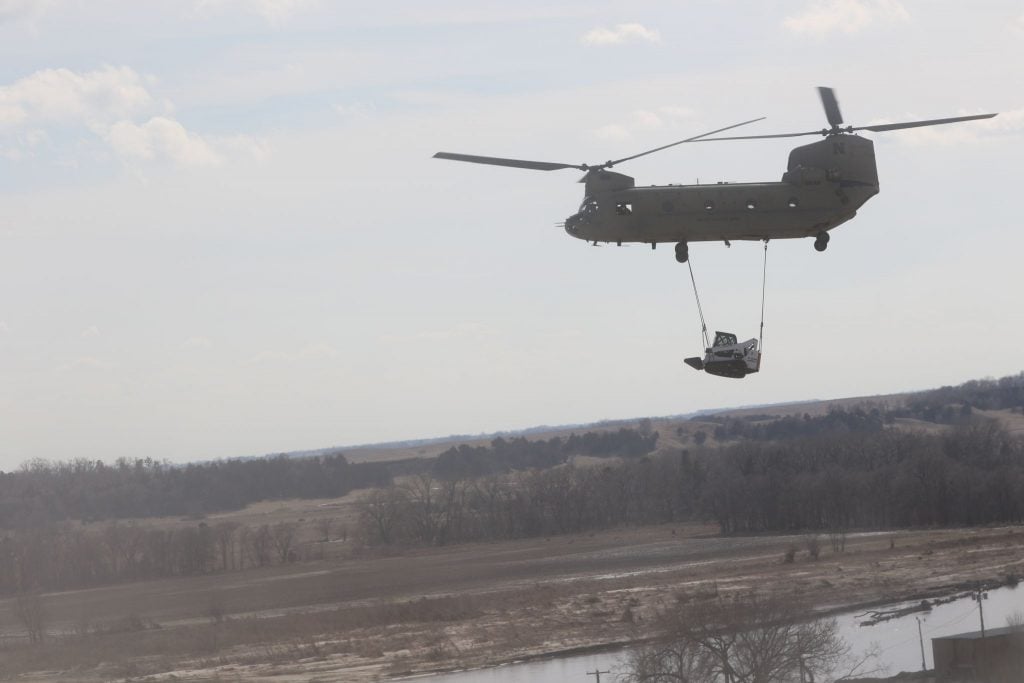 ‘That's the part that makes this brotherhood so special,’ one church leader says of disaster assistance.

UPDATED STORY: The Nebraska City Church of Christ, a small congregation on the Nebraska side of the Missouri River, is working to help neighbors hit hard by recent flooding, preacher John Telgren said.

“We are serving southwest Iowa, including Hamburg, Percival and Bartlett areas, as well as some in Peru, Neb.,” Telgren said. “While the homes Nebraska City did not get hit directly, our neighbors got hit hard.”

Telgren offered this overview to The Christian Chronicle:

“Many homes are underwater, and many people worked at places of employment that are now underwater. Those people are, therefore, without a job and without a paycheck.  There are many who will not be able to get back to their homes until late this year, and in some cases, next year or even later.

“There are also many who no longer are able to get to work because their route has been flooded. Their 10- to 15-minute trip is now up to a two-hour trip, which has created a huge financial burden for many people that live across the river but work in Nebraska City.

“The Nebraska City Church of Christ became a distribution center with the Churches of Christ Disaster Relief. When it became evident that many of our neighbors could not get there easily, one of the members loaned his covered trailer to the effort, and the disaster supplies were loaded up and brought over to their neighbors on the Iowa side over the river in a temporary distribution point at a central location in Sidney, Iowa.

“The surrounding communities were especially thankful for the supplies the church provided. The congregation has registered nearly 170 families affected by the flood, several of whom have made return visits for more supplies. The congregation has also been providing gas cards for those who have to make the long trip back and forth, and other types of gift cards for other unforeseen needs, as well as miscellaneous needs as they arise.

“Some families have permanently relocated from the Iowa side to new homes in Nebraska City, and the Nebraska City Church of Christ has been blessed to be able to assist them in settling into their new homes.

“The Nebraska City Church of Christ is not a big congregation as they have less than 100 members with an average attendance of about 65 to 75, nor do they have a lot of financial resources, as the majority of the members are lower income.  However, the congregation has a reputation in the community for having a big heart, and this has been yet another way that God has enabled them to reach out and show the love of Christ.

Telgren said he has reminded the congregation that the relief effort “is not ultimately about the food, supplies and other help any more than it was about the fish and the loaves when Jesus fed thousands of people.

“Even if you have a lifetime supply of bread, it will not prevent the inevitable that happens to all of us,” the minister said. “Only the bread of life, which Jesus gives, can do this.” 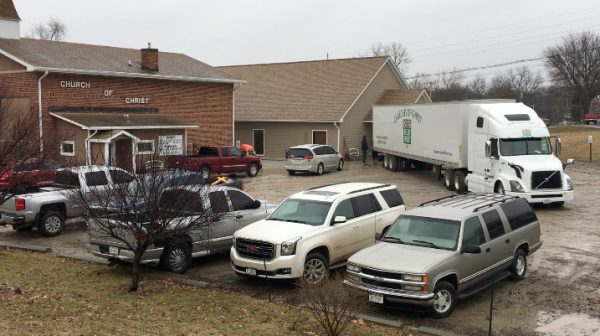 Emergency food and supplies from Churches of Christ Disaster Relief Effort are unloaded at the Nebraska City Church of Christ.

ORIGINAL STORY: Jeff Weaver was tired and inspired at the same time.

Since historic flooding struck the Midwest in March, the minister for the Bellevue Church of Christ, south of Omaha, Neb., hadn’t stopped working and serving.

“I’ve been putting in 80-hour weeks since this started,” Weaver said. “There’s so much in me and so many stories and so much sadness. But really, it’s been an amazing story.”

The story, as Weaver explained, involves the church — and really, the entire community of Bellevue, he said — working to show love and support to those devastated by the flooding.

“One thing that I can say about our small congregation of 150 is that it would be tough to outlove the church at Bellevue,” Weaver said. “Our goal is just to saturate the city of Bellevue with the love of God.” 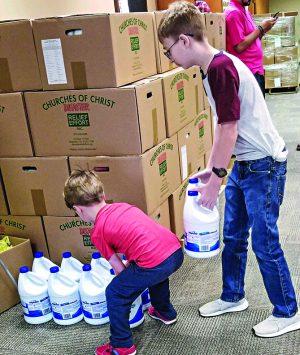 Volunteers at the Bellevue Church of Christ in Nebraska organize emergency supplies delivered by Churches of Christ Disaster Relief Effort.

After levees breached along the Missouri River, the church received a tractor-trailer load full of emergency food and supplies from Nashville, Tenn.-based Churches of Christ Disaster Relief Effort.

Also, the church donated money to allow victims to wash clothes for free at an area laundromat. Patti Estaniqui directs the relief effort, while Weaver focuses on counseling.

Elsewhere, the Fremont Church of Christ, 40 miles west of Omaha, serves a town that was cut off from the rest of Nebraska by the widening of the Elkhorn and Platte rivers.

The Fremont congregation also received goods from the Nashville ministry and became a staging ground for volunteers organized by the Churches of Christ Disaster Response Team, overseen by the elders of the Cassel Hills Church of Christ in Vandalia, Ohio.

“That’s the part that makes this brotherhood so special,” Fremont church leader Dondi Eckert said of the out-of-town Christians who rushed to help. “People bend over backwards, and the response has been great.” 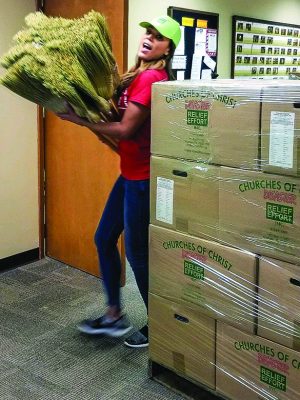 A volunteer at the Bellevue Church of Christ in Nebraska carries emergency supplies delivered by Churches of Christ Disaster Relief Effort.

Away from the flooding, the Southwest Church of Christ in Omaha — one of the state’s larger congregations with 300 members — worked closely with charities such as the Heartland Food Pantry and the Salvation Army to help victims.

“Their water treatment was impacted,” church member Cole Franson said. “So as a church, we’ve just been funneling as much bottled water to them as we can.” 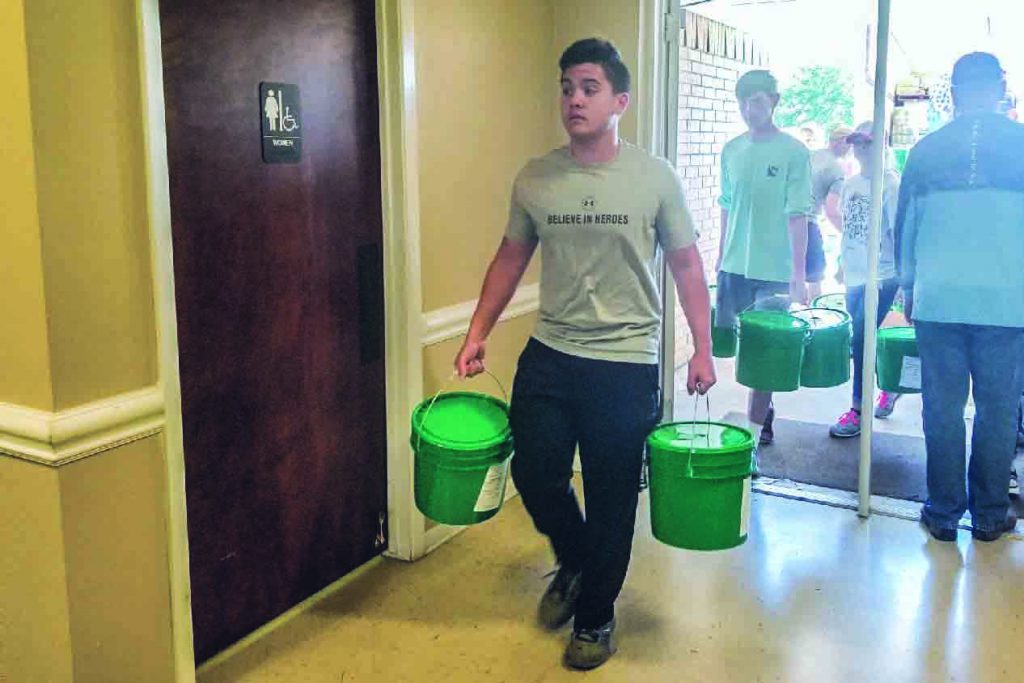 After a tornado touched down in the East Texas town…