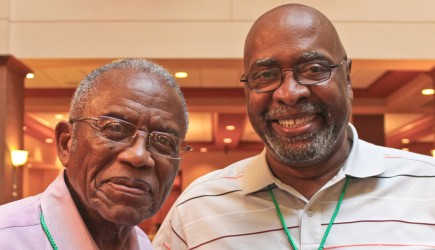 Erik Tryggestad
FRANKLIN, Tenn. — Wendell Wilkie Gunn didn’t set out to challenge segregation in his hometown of Florence, Ala.
“I just wanted to go to school,” he said.
In 1963, three years after graduating from Nashville Christian Institute, Gunn attempted to enroll at the all-white Florence State University, now the University of North Alabama.
That same year, the first black students had won admittance to the University of Alabama in Tuscaloosa. Fred Gray, an NCI alum, represented student Vivian Malone in the lawsuit.
After the University of Alabama decision, “I didn’t figure you had to sue every school,” Gunn said.
He walked onto Florence State’s campus and, “15 minutes later I was in the president’s office, and he was saying they couldn’t admit a black.” But, the president told him discretely, “if you sue us, we’ll have to admit you.”
Gunn’s mother contacted Gray, who did just that. The court battle took approximately 20 minutes, the attorney recalled. The judge issued an order and Gunn enrolled.
“It was the easiest case I had in all my civil rights cases,” said Gray, who also represented Rosa Parks and Martin Luther King Jr.
Because of the lawsuit, Gunn’s mother lost her job as a cook at a restaurant — which closed three months after she left. On campus, “hardly anyone talked to me for the first several months,” Gunn said. Then, during an assembly, he received an award for the top score in physics. His classmates rose to their feet and cheered.
“I cried and the cheers became louder,” he said. “From that day forward, my life on campus was uneventful and totally pleasant.”
Gunn went on to serve as an executive for Chase Manhattan bank. From 1982 to 1984, he served as special assistant to President Ronald Reagan, helping the administration craft its trade policy with Southeast Asia. Now he is a member of the Stamford Church of Christ in Connecticut.
“I wasn’t brave,” Gunn said of his historic walk to campus. “I just showed up.” Speaking to Gray, he said, “You guys looked into the mouth of the beast every day, for years.”