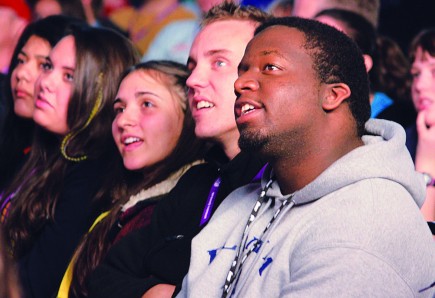 Bobby Ross Jr.
Listen up, faithful adults.
Young Christians have ideas for making the church more like God meant it to be — and they’re eager to be heard.
In a national survey, teenage members of Churches of Christ offered advice for a fellowship faced with graying congregations and disappearing millennials — loosely defined as those born in the 1980s and 1990s.
“Students in this study speak of the church with great love, hope, insight and wisdom,” researchers Dudley Chancey and Ron Bruner reported in the 2012 Church and Relationship Study by Oklahoma Christian University’s Intergenerational Faith Center. “They suggest ways to cope with a changing culture that respect the identity and mission of the church.”
Researchers surveyed 482 students at three national meetings: Winterfest in Texas and Tennessee and the Challenge Youth Conference in Tennessee.
Among the findings:
• Teens want more upbeat worship and meatier Bible study.
• Teens seek deeper, more meaningful relationships with adult Christians.
• Teens desire to “go out and serve” beyond church walls.
• Teens perceive judgmental attitudes as hampering the spread of the Gospel.
Students’ responses revealed a desire to see the church become more welcoming in attitude and practice, said Chancey and Bruner, co-directors of the Intergenerational Faith Center.
“Instead of shunning outsiders, Christians must be adept at reading and adapting to different cultures,” the researchers reported, summarizing the teens’ position. “Christians should listen to the opinions of others with an open mind and describe their own struggles more openly. Consequently, students watch closely for authenticity in the lives of those who speak for the church; life and lesson must be consistent.”
CHURCH PEOPLE TOO JUDGMENTAL?

Teens interviewed by The Christian Chronicle echoed the researchers’ findings.
Jasmine Marie Smith, 16, a member of the Newnan Church of Christ in Georgia, said her friends view church people as “judgmental and hypocritical.”
“They don’t feel welcome when they walk through the door like they should,” Smith said. “We are God’s people, and we should be opening our arms up to his children that have gone astray.”
Alex Free, 17, a member of the Caldwell Church of Christ in Idaho, said her agnostic and atheist friends
“feel uncomfortable with the judgments they feel surrounding the tenets I was raised with.”
“I’ve always thought that the best way to share the love of Christ was to love, not evangelize,” Free said. “With this in mind, churches would, I believe, be better to focus less on sin and more on God’s love that is so great that it erases sin.”
Matthew Stitts, 18, a member of the Piedmont Church of Christ in Alabama, advocates more focus on the Bible — and less on personal opinions.
“If adults would let the Bible speak for itself, then that would help the church out,” Stitts said. “Also, people within churches argue and debate each other. That only destroys the church, not benefits it.”
MANY ‘APATHETIC TOWARD GOD’
Young people abandoning Churches of Christ after high school have contributed to a membership decline nationally.
The 2012 edition of Churches of Christ in the United States counted 1,554,231 adherents, a number that includes members and children. That’s a drop of more than 102,000 adherents, or 6.2 percent, since 2003.
In the survey by Chancey and Bruner, 78 percent of students said they were “very likely” to attend a Church of Christ as an adult; 18 percent responded “maybe”; and 4 percent replied that they were “not likely” to do so.
“This data … causes concern for several reasons,” the researchers said. “First, many of those students who responded with ‘maybe’ are likely to become what David Kinnaman (in his book ‘You Lost Me’) calls nomads or prodigals, lost at least temporarily, if not permanently, to the church.”
Another concern: Those surveyed were attending conferences frequented by active members of youth groups.
That means, Chancey and Bruner said, that “those who might already be at risk spiritually were not present to participate in this study. Therefore, the real percentages at any particular congregation might be considerably higher.”
Mike Avery, youth minister for the Memorial Church of Christ in Houston, said the survey “represents the students who are pursuing God actively in their lives, which, in my opinion, is a small minority.
“Most students that I encounter are apathetic toward God, church and Christianity,” Avery said. “They see it, at most, as a part of their weekly schedule like math or science class — except they don’t bring their textbook.”
Brett Petrillo, youth minister for the Bear Valley Church of Christ in Denver, said he was skeptical of the findings and “unclear if there is any agenda behind this survey.”
“No matter what anyone thinks or feels, we must always follow what Scripture says about worship, fellowship and practice,” Petrillo said.
A postmodern culture that frowns upon the concept of absolute truth influences teens’ thinking, said Jessica Knapp, youth ministry leader for the Mountain Avenue Church of Christ in Tucson, Ariz.
Teens want to be inclusive of other people and viewpoints, said Knapp, who described the researchers’ findings as “very consistent” with her experience.
“A student of mine is interested in being both Wiccan and Christian, not realizing there is a reason for mutual exclusivity,” Knapp said.
At the same time, young people tell Knapp they want to be part of a “passionate church.”
“They don’t want to fellowship with a bunch of believers who have masks on and pretend everything is perfect,” she said. “They are not interested in checking a box for attending a routine and boring worship service.”
Count Caroline Sutton, 17, among those teens.
“I know this isn’t true of every adult, but the vast majority seem lifeless,” said Sutton, a member of the Naperville Church of Christ in Illinois.
“In my youth group, people pour their hearts out in song, and you can feel the Holy Spirit moving in the room, and people confess difficult sins and talk about their struggles,” she said. “But then during church service on Sunday morning, everybody seems so constricted and still.”
‘CAPABLE OF DOING HUGE THINGS’
In interviews with the Chronicle, teens challenged church leaders to embrace the younger generation.
Sammi Whitwell, 16, a member of the Garden Ridge Church of Christ in Lewisville, Texas, said adults too often write off all teens as troublemakers and rebels.
“Sometimes, teenagers have great ideas, and nobody would ever know because we are stereotyped as inexperienced and lacking in maturity,” Whitwell said.
Ruth Lalli, 16, a member of the Park Plaza Church of Christ in Tulsa, Okla., urged adults to ask more, not less, of her generation.
“If adults raised their expectations, a lot of teens would rise up to meet them,” Lalli said. “Teenagers are definitely capable of doing huge things, but they do need some guidance and encouragement.”