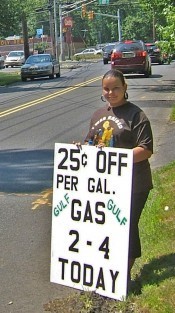 Bobby Ross Jr.
NORTH BRUNSWICK, N.J. — Pinched by high prices, motorists crowded the pumps at a Gulf station in this sprawling New York City suburb on a recent Saturday.
The lure: gasoline discounted 25 cents per gallon for two hours.
The Brunswick church sponsored the “Gas Buy Down” as a way of showing residents that God — and his church — care about the issues they face, minister Carl Williamson said.
“Overall, it made a huge buzz in the community, which is what you want to do with this kind of activity,” Williamson said.
In all, the church helped buy 1,706 gallons of gas — a price tag of $426.50 — for 150 customers. Members also washed windshields and gave away air fresheners with the church logo.
“The whole cost of this event is really very little,” Williamson said. “But it is a great story in the community.”

WHERE GOD LEADS
In a county with 1.5 million people but only five Churches of Christ, a desire to reach the lost with the gospel fuels the Brunswick church.
Four couples in their 20s — Shaun and Marci Dutile; Brian and Shannon Gifford; Scott and Rachel Penick; and Carl and Alicia Williamson — launched the congregation four years ago.
Even before knowing where God might lead them, the couples committed to plant a church after graduation from Harding University in Searcy, Ark.
Carl Williamson, the only Bible major on the team, would line up financial support and serve as full-time minister. The others would find secular jobs and serve as vocational missionaries.
“The idea was that we could go anywhere, but where would be the greatest need for us to go?” said Williamson, who is sponsored by the Cloverdale church in Searcy.
Team members thumbed through 21st Century Christian’s Churches of Christ in the United States directory and focused on areas with the lowest ratios of churches to population.
After receiving a positive reaction from ministers in New Jersey, they settled on the North Brunswick area.
Before — and after — starting the church, they worked with experts such as  Marvin Crowson, Harding’s domestic missionary in residence, and Stan Granberg, executive director of the Kairos church-planting ministry.
“This team has been wise to seek the advice of many people and organizations that are helping reach out to the unchurched people who are missing from the fold of Christ,” Crowson said.
STRESS AND STRUGGLES
At first, these domestic missionaries dealt with more struggles than successes.
Finding employment proved difficult for some. Growth came slowly to the church, even as the couples adapted to an area  with one of the highest costs of living in the nation. They juggled demanding jobs, ministry and responsibilities at home.
“It took a while to get rolling,” said Scott Penick, an attorney.
Monday through Friday, Penick spends three hours a day on a commuter train to and from Wall Street.
On Sunday, he leads worship.
Often, church activities spill into Saturday, too.
“Initially, when it was just eight of us and a few others, we always had to be a part of everything that was planned, which made it difficult when our family just needed time together,” said Brian Gifford, an accountant. “This has become less of an issue now because of the  growth that God has blessed us with, but at times it’s still difficult.”
Marci Dutile, whose husband, Shaun, worked in business for three years before joining Williamson as a full-time minister, agreed: “The work load is sometimes a challenge. We have all felt burned out several times.”
On days when she feels particularly down, Dutile said she remembers that “it isn’t always about what we ‘are’ or ‘are not’ doing because God is in control.
“It seems to come down to prayer for me,” she said. “Each week when I have specifically prayed for visitors, they have come. I need to be more of a prayer warrior myself.”
Alicia Williamson, a public school health teacher who grew up in Nashville, Tenn., said New Jersey felt like home a lot faster than she thought it would.
“The thing I love about what we do is that every day I get to wake up and know God needs me in this place,” she said.
Initially, the Brunswick church met in a house. Later, it moved to the second floor of an office building before renting a public elementary school.
Average attendance has doubled in the last year, hitting 70. Team members pray it will top 100 by year’s end. (At least four new additions are expected within the team itself: All four women are pregnant.)
Shaun Dutile attributes the recent growth not to the talent of the missionaries, but to God.
“God uses whoever is available. He has used donkeys before,” Dutile joked. “Many times, we do not know what we are doing, but we are walking by faith.”
ANCIENT GOSPEL, MODERN TECHNIQUES
While endeavoring not to change the gospel message itself, the Brunswick church has embraced modern technology and approaches to make itself known to the community.
The congregation mails thousands of postcards to residents in its ZIP code advertising special sermon topics such as “Serious Satellite Radio,” “Mission Possible: The Attainable Family” and “Life’s Tough: Overcoming Adversities.”
Visitors receive $10 gas cards when they show up and a follow-up card in the mail with a $5 gift card to Dunkin’ Donuts.
Small groups emphasize not just Bible study but also recreational activities such as hiking and basketball.
“My goal is that every single person in town will know about the Brunswick Church of Christ,” Carl Williamson said. “When they do have some event in their life that causes them to ask questions about God … I want them to think first about the Brunswick Church of Christ.”
CHURCH WEB SITE: www.njmissions.com