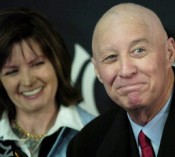 Tamie Ross
New York Yankees broadcaster Bobby Murcer, a member of the Memorial Road church in Oklahoma City, says a scare that led doctors to wonder whether the 61-year-old’s brain tumor had returned has ended well.
“Final path reports just in,” Murcer’s wife, Kay, shared with family and friends by e-mail on Wednesday. “No tumor.”
The former All-Star outfielder underwent brain surgery Dec. 28, 2006, inHouston. The brain tumor removed wasmalignant, and Murcer has undergone treatment since.
“God is so good, and we are back on track with the treatment,” Kay Murcer said.
The family requested prayers late last week when doctors were concerned that the tumor had recurred.
“With this tumor that I have, any little thing that’s out of theordinary, they need to find out about it,” Murcer told Newsday lastweek.
He plans to join the team in Tampa, Fla., later this week to participate in a spring training broadcast game.
Murcer was the team’s color analyst on radio from 1983-1986 and has been on TV as a color commentator since 1987.
Afive-time All-Star in his 17-year playing career, he batted .277 with252 home runs and 1,043 RBIs. He served as the Yankees’ assistantgeneral manager in 1986.