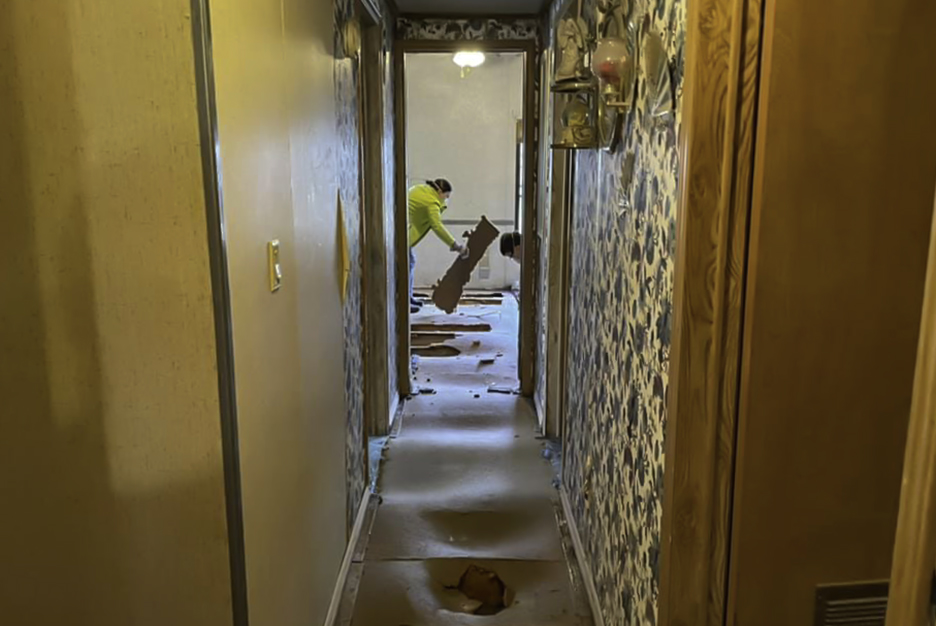 Campus ministry forgoes the beach to serve in flood-stricken Kentucky. "They were loving every second of it," minister says.

After a year of lockdowns, nasal swabs and Zoom lectures, it’s understandable that college students would be sorely tempted to head for the beach.

But 13 members of the RiverHawks for Christ campus ministry in Tahlequah, Okla., picked a different destination for their spring break — eastern Kentucky, the heart of the Cumberland Plateau. There, in the small towns of Jackson and Beattyville, they spent the better part of a week ripping rotted drywall and floorboards from homes devastated by floods back in March. 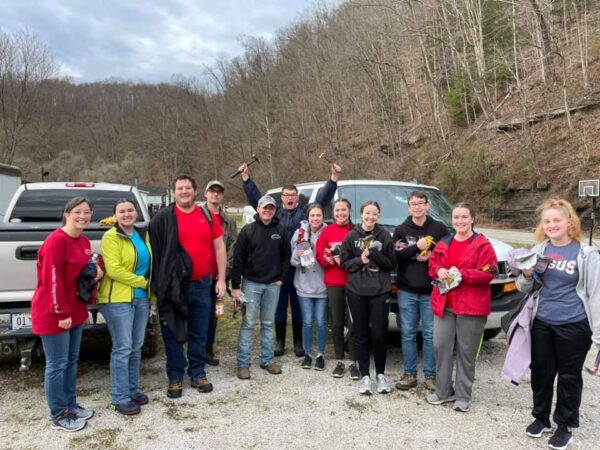 Members of RiverHawks for Christ in eastern Kentucky

“They worked hard — came back muddy and tired,” said John Albright of Churches of Christ Disaster Response Team, who coordinated the work.

But after a year of COVID-19, “they were loving every second of it, absolutely,” added campus minister Tyrel Hatfield. “It was great to feel a little bit normal again.”

RiverHawks for Christ, a ministry of the South College Church of Christ in Tahlequah, serves nearby Northeastern State University. The church’s previous campus minister, Wade Bullard, planned to lead a group from the ministry on a spring break mission trip last year. They were going to help the Disaster Response Team organize its warehouse in Ohio.

‘They were loving every second of it, absolutely. It was great to feel a little bit normal again.’

The pandemic canceled those plans and turned the 2020 spring break into the longest — and arguably the worst — spring break ever. Classes, church services and ministry activities all moved online.

So did the final weeks of Andrea Stone’s high school career. Stone, who goes by Andy, grew up in the pews of the Stonewall Church of Christ in southern Oklahoma. She earned her diploma virtually before moving 150 miles northeast to Tahlequah last fall for her freshman year at Northeastern State.

“Classes have been real iffy,” she said. “Some days you go to class as normal, but at the drop of a hat anything can change.” If a classmate is diagnosed with COVID-19 or has been exposed to someone with the virus, classes may have to move online. For Stone, checking email before class — to see “whether you’re going to class or not” — is the new normal.

She didn’t know a soul when she arrived on campus but quickly found a home with RiverHawks for Christ, which hosts devotionals and Bible classes in addition to other activities with the South College Church of Christ.

Despite the uncertainty of the pandemic, the campus ministry has “been very regular,” Stone said. “We have stayed together and have been able to meet.

“It’s an escape from the panic of the virus. I find my solace here.”

She was eager to join the mission trip to Kentucky — even though it meant a week of pulling up old, damp floorboards from homes. She quickly learned what it sounds like when a board pulls free with all of its nails intact — meaning she wouldn’t have to rip them out of the studs one by one.

“That’s the greatest sound in the world,” she joked, “when the nails come up with the board.” 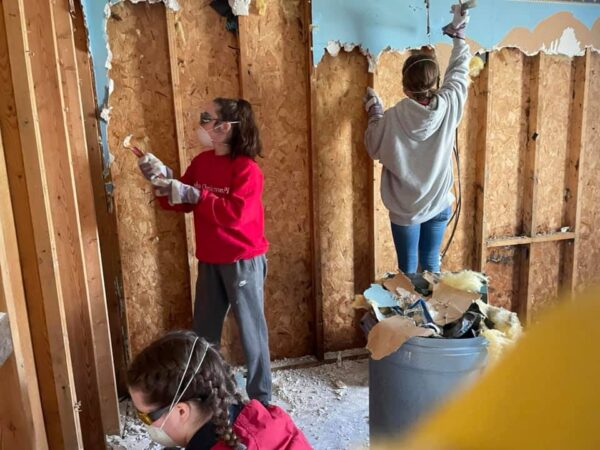 Members of the RiverHawks for Christ ministry remove flood-damaged boards from a home in eastern Kentucky.

Albright coordinated the Oklahomans in addition to church groups from California and Alabama who came to help in eastern Kentucky. They helped distribute boxes of food and cleaning supplies provided by Churches of Christ Disaster Relief Effort in Nashville, Tenn.

The area where they served was at the western edge of the McCoy family’s land during the infamous Hatfield-McCoy feud of the late 1800s. Albright made sure to point that out to Tyrel Hatfield, who brought three of his children on the trip — one of them a Northeastern State student. Hatfield, a graduate of Oklahoma Christian University, has served with the South College for 20 years and recently took on the role of campus minister.

Thankfully, no feuds broke out during the trip, joked Albright, who worships with the Clear Creek Church of Christ in Hixson, Tenn.

However, he does remember the Oklahomans singing with at least one of the homeowners they helped.

They also worshiped — and sang beautifully — with one of the Churches of Christ in the area, Albright said. When they weren’t working, the team slept on the floor of the church’s classrooms. 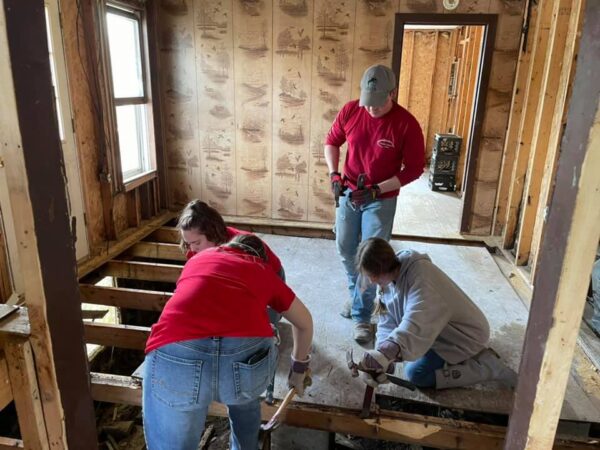 Members of the RiverHawks for Christ ministry at work in Kentucky.

In addition to singing, “we prayed with people,” Hatfield said. “They were the mission, not the homes.”

Stone said that focusing on others helped take her mind off the pandemic. It also “brought us closer, as a family, to God,” she said.

Hatfield added, “I couldn’t think of a better way to spend spring break.” 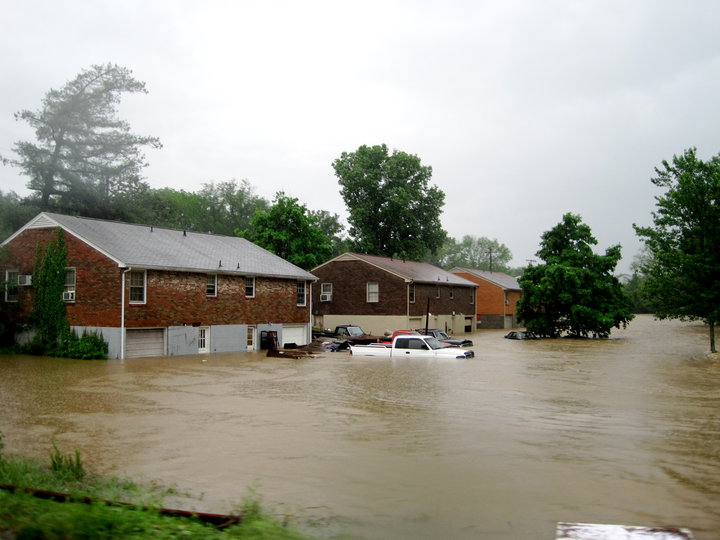 ‘Hands and feet of Jesus’ amid the flood

The scene not far from the Antioch Church of Christ,… 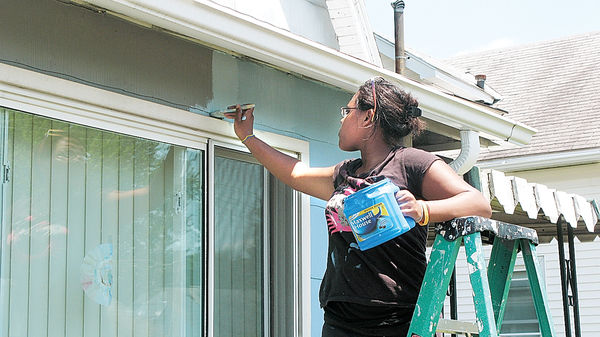 Hundreds of teens from 14 states have gathered this week…