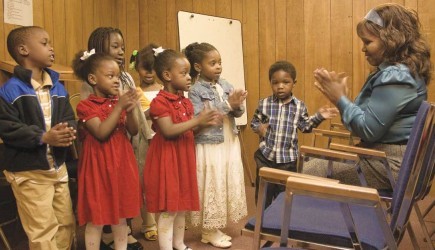 Erik Tryggestad
HYATTSVILLE, Md. — For Kingsley Boateng, Sunday mornings are reminders of home — not just the heavenly one he anticipates in the hereafter, but the earthly one he misses in Africa.
Born in Ghana, Boateng is the only one of seven siblings to come to the U.S. for higher education. He earned a doctorate in biochemistry in Ohio before moving inside the Washington Beltway, where he works as a research fellow for the National Institutes of Health.
He’s also one of the leaders of the 75-member Church of Christ (Ghanaian Congregation) in Hyattsville, a Maryland suburb about seven miles from the U.S. Capitol.
“We have one mind, one focus,” Boateng said. “It makes the work go a little bit faster.”
The church meets in the building of the University Park Church of Christ, a 165-member congregation. Ghanaian and American children attend Bible classes together. One preschool class has 14 kids on the rolls. All but two are Ghanaian, said Linda Simpson, a University Park member who teaches Sunday school.
As University Park members worship in the main auditorium, the Ghanaians gather in a smaller sanctuary across the hall. The Africans sing hymns and listen to sermons in a mixture of English and Twi, a Ghanaian language.
The two congregations consider each other as family, said King Binney, who teaches an adult Bible class for the Ghanaian church.
“We are all the Church of Christ,” he said.
But both churches need space, Boateng said. The Ghanaians are looking for a new home in the pricey Washington suburbs.
“We’re struggling to raise funds to buy property,” he said.
‘WE ARE ABLE TO SEE GOD HERE’
On a recent Sunday, Binney, a registered nurse, launched a series on the book of Acts. He bombarded his audience with questions about the church’s rapid growth after Pentecost.
“The first African to become a Christian was in what chapter?” Binney asked.
“Chapter eight,” they replied.
Many Africans have followed the Ethiopian’s example in Acts. Today Churches of Christ in Africa outnumber those in the U.S., and estimates of total membership top 1 million. Churches also are booming in other parts of the Global South — Southeast Asia, Latin America and the Indian subcontinent.
African Christians are eager to spread the Gospel, but when they come to the U.S., some “forget about the Lord,” Boateng said. The Ghanaian church baptized eight people last year but also has restored many “backsliders” who had stopped attending, he said.
Some Ghanaians who attend American churches are less active than they were in Ghana, said Emmanuel Odame.
“So coming together helps them also to … use their God-given talent in their own language,” Odame said.
Ghanaian Churches of Christ also meet in New York and Columbus, Ohio. Smaller groups exist in Florida, Mississippi, West Virginia and Canada.
In July the Maryland church hosts an annual Ghanaian lectureship. Nicholas Mensah is the host minister.
Recently the church hosted a separate conference for Ghanaian Christian women. Mensah’s wife, Glory, was a speaker.
“We do miss home, but we feel great that we are able to see God here,” she said.
A ‘CROSS-SECTION OF THE WORLD’
Thirteen miles from Hyattsville, a diverse body of believers worships at the 16th and Decatur Church of Christ.
The church, located in the District of Columbia, has about 125 members, minister Edward Wilson said. About 30 are from Latin America.
“We have people from all over … Africa, Jamaica, the Philippines,” he said. “It’s a pretty good cross-section of the world.”
George Roy, a native of Bangladesh, found out about the church after he moved to Washington in the early 1990s.
He called a Presbyterian church and asked to meet with the pastor, who said he was free in two weeks. Then he called the 16th and Decatur church. Member Wayne Crump asked him to come right away and gave him directions.
“I got the truth,” Roy said.
He was baptized and has attended the church with his family ever since.
HELPING ‘THE CHURCH BACK HOME’
Regardless of where they worship, the Global South Christians share a desire to spread the Gospel in their homelands.
Since 1997 Roy had traveled to Bangladesh for month-long mission trips and has planted congregations there. His church supports the work.
The economic downturn kept Roy from making the trip last December. It also cost him his accounting job with a construction company. He drives a taxi to make ends meet, but that isn’t his main concern. Almost half of Bangladesh’s 162 million souls live on less than a dollar a day. He wants to help.
“We need $3,000 to $4,000 per year to pay for one congregation,” he said.
Members of the Ghanaian church also feel a burden to help their mother country. The congregation supports the Hope Foundation, which provides financial support for ministers in rural Ghana and the work of Arnold Dzah, a Ghanaian-born missionary in Senegal.
“Our ultimate aim is to be able to help the growth of the church back home,” Boateng said.
CONTACT the Ghanaian congregation at churchofchristghmd.org or the 16th and Decatur church at (202) 882-4711.