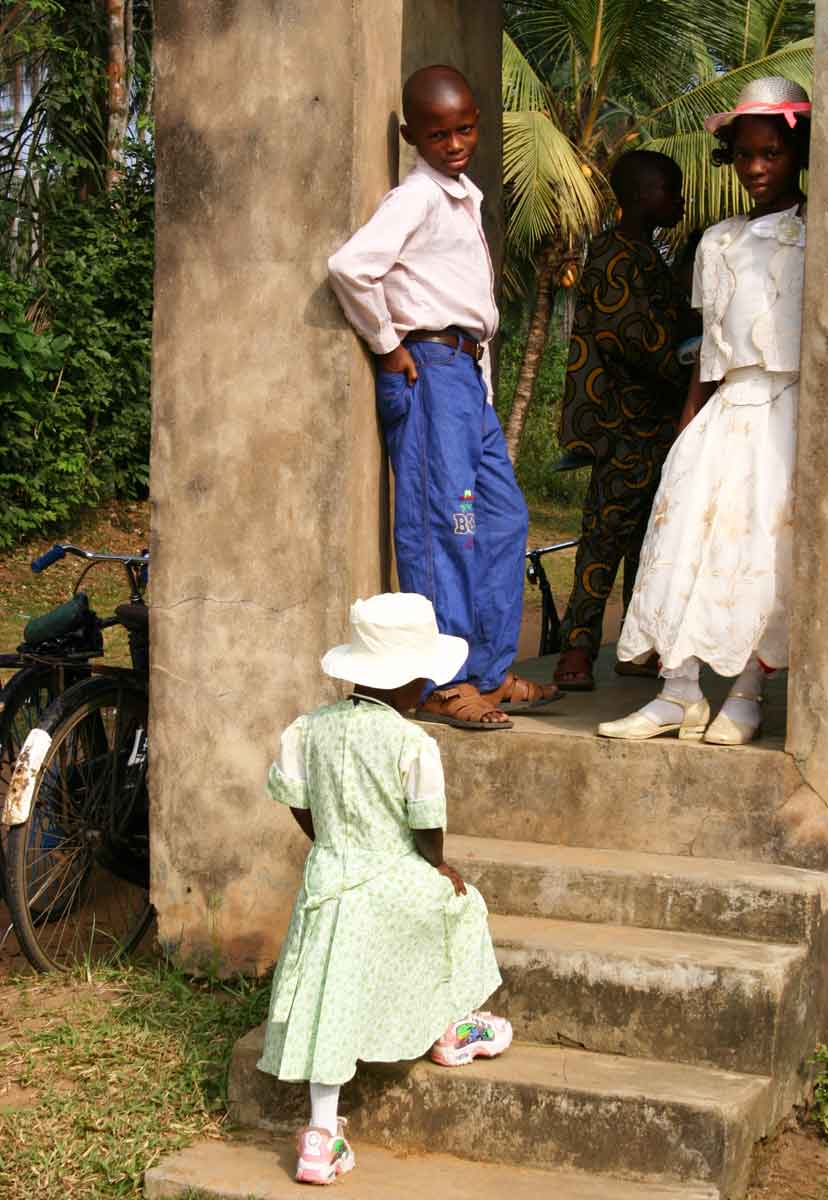 More woes in Nigeria: Violence between Christians and Muslims on the rise

Children gather for Sunday school at the Obong Church of Christ in southern Nigeria in 2005. Nigeria’s predominantly Christian south hasn’t suffered the violence endured in northern Nigeria, but fuel price hikes, kidnappings and unrest have plagued the entire country. (Photo by Erik Tryggestad)

Recent attacks against churches in Nigeria have brought Christians around the world to their knees, praying for stability and peace in the troubled West African nation.
For us at The Christian Chronicle, the news also requires a bit of what Wikipedia calls “disambiguation.”
We received several e-mails and notes — from readers in the U.S. and Africa — after a suicide bomber detonated a car full of explosives outside the headquarters of the Church of Christ in Nigeria during Sunday worship on Feb. 26. The blast killed at least three people, the Associated Press reports.
The Church of Christ in Nigeria, often abbreviated COCIN, is a denomination with no ties to the Churches of Christ that we cover at the Chronicle.
Jos, a city of about 900,000 people, straddles the unofficial border between Nigeria’s predominantly Christian south and Muslim north. In recent years the city has been a flash point of violence between the two faiths, though many Nigerians  say the tensions have less to do with faith and more to do with politics, tribal loyalties and rights to grazing lands.
Churches of Christ (the ones we cover) have a presence in Jos. Several congregations meet in the area, and the city is home to the School of Biblical Studies, a ministry training program.
In 2010, violence near Jos claimed the life of Theodore Essemo Ebulla, a minister and student at the school, as we reported:

The 34-year-old native of Cameroon had preached in a rural Nigerian village and was returning to the School of Biblical Studies in Jos when he encountered a group of rioting Muslims who killed him with machetes, said Steven Worley, a missionary who works with the school.

Read the full story.
In 2006, a Church of Christ and its minister in northern Nigeria were spared from a wave of anti-Christian violence because the congregation had given pencils to its communities Christian — and Muslim — children.
More recently, we reported on the work of Ebenezer Udofia, a Nigerian native who teaches farming techniques in the drought-stricken communities of East Africa. Healing Hands International, Udofia’s employer, moved the Nigeria and his family from Jos to Kenya’s capital, Nairobi, partly because of the ongoing violence.
Are you in Nigeria, or do you have friends there? Please send us your thoughts on the country’s current woes, and how you and your congregation are responding. For what should Christians be praying with regard to Nigeria?