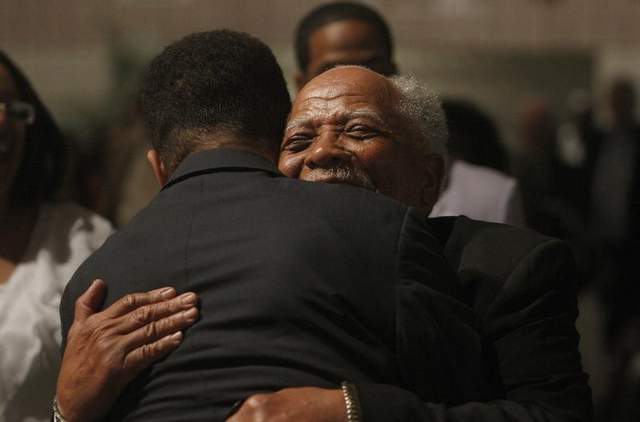 Minister Franklin Florence, facing, shares a hug with Congressman Jesse Jackson Jr. during a recognition dinner for Florence for his civil rights work. (Photo by Jamie Germano, Democrat and Chronicle, via democratandchronicle.com)

The Democrat and Chronicle reports on Franklin Florence, senior minister for the Central Church of Christ in Rochester, N.Y.:

Minister Franklin Florence is a man who holds a special place in Rochester’s history.
He also holds a special place in the hearts of many people.
That was made abundantly clear as more than 700 people gathered Friday at the Riverside Convention Center for a community recognition dinner and tribute that featured as keynote speaker U.S. Rep. Jesse Jackson Jr., D-Ill.
“It’s humbling, very humbling to have this kind of outpouring of appreciation. It certaintly is very special,” Florence said.
Florence is best known for leading civil rights struggles through F.I.G.H.T., an organization he helped create, and for mobilizing thousands of people during prolonged battles for jobs with the Eastman Kodak Co. The battles ultimately led to the company’s hiring of hundreds of African-Americans in Rochester.